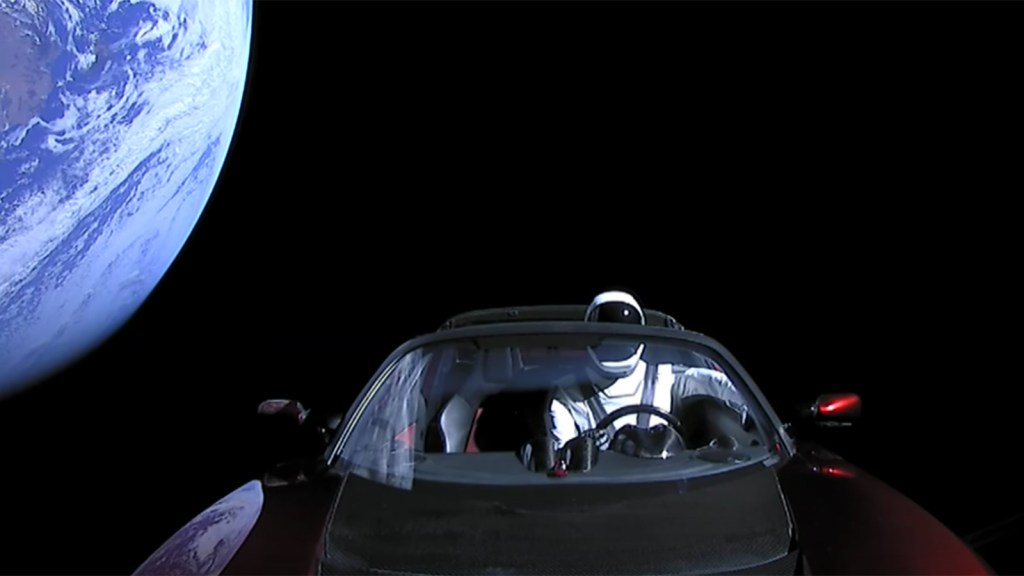 Within minutes, there were live views of our beautiful planet from a camera mounted behind a creepy-looking mannequin in a space suit sitting at the steering wheel. On the car’s center console were the words: “DON’T PANIC!”

The whole thing was a grand spectacle worthy of P.T. Barnum as well as a lofty achievement in its own right. It was the brainchild of a remarkable person whose life goals include solving climate change and ensuring the long-term survival of humanity. Nothing modest about that.

For those of us who share Musk’s resolve to tackle climate change, it felt like the perfect moment to celebrate not only the vision of a triumphant future, but of progress toward that future. Because, holy wow, flying cars and simultaneous rocket landings are now a thing. If all that’s possible, it’s easy to dream about what’s next. It may even bring … hope.

Yet my Twitter feed was split almost evenly. Lots of people have serious problems with the symbolism of a billionaire strapping a $100,000 sports car to the most powerful rocket in the world at a time when so many are suffering from inequality and poverty. If testing the rocket required some kind of payload, aren’t there better things he could have launched into space on a billion-year orbit around the sun? Like Harvey Weinstein, for instance.

What’s more, Musk’s businesses have long been criticized for their labor practices. Should we really be so excited about what is essentially a glorified advertisement for the commercial exploitation of space — the ultimate commons?

Let’s agree on this much: Musk’s achievements shouldn’t generate uncritical hero-worship and his unhealthy work-life imbalance shouldn’t be seen as aspirational. But there’s no way to deny that what his team has done is significant.

Launch all the cars into space IMO.

Traditional “progress” on climate change is moving much too slowly. Global greenhouse gas emissions are still rising, the development of renewable energy is far too slow, and the U.S. Congress isn’t even seriously talking about this at all. Look at California, where there’s widespread public support for addressing our problems now. The state’s high-speed rail line was approved by voters in 2008, but it’s not expected to be up and running until 2029. By then, Musk may have already leapfrogged rail travel altogether. Humanity doesn’t need a techno-savior, but it sure helps to have one.

It’s difficult to imagine a world that succeeds in tackling climate change and harder still to imagine what it means to start building that world right now. Climate change demands that radical transformation quickly become the norm — just like what Musk is doing. If seeing that happen before our eyes is uncomfortable, then we should feel uncomfortable.

In a recent interview with Rolling Stone, Musk expanded on why he does what he does the way he does it:

“Climate change is the biggest threat that humanity faces this century, except for AI,” he continues. “I keep telling people this. I hate to be Cassandra here, but it’s all fun and games until somebody loses a fucking eye. This view [of climate change] is shared by almost everyone who’s not crazy in the scientific community.”

“The fundamental intention of Tesla, at least my motivation,” Musk explains in his halting, stuttering voice, “was to accelerate the advent of sustainable energy. That’s why I open-sourced the patents. It’s the only way to transition to sustainable energy better.

Starting a rocket company like SpaceX is much more than just a very expensive ego-trip for Musk. In the same interview, Musk said that his vision of humanity as a species able to move from planet to planet “makes the future far more inspiring if we are out there among the stars and you could move to another planet if you wanted to.”

That’s exactly the seductive, aspirational vision of the future we need.

So, while you might have mixed feelings when cheering this accomplishment, I think it’s worth cheering for this accomplishment anyway. Sure, challenge Musk and his companies to do better but also celebrate the successes. Ambitious, even eccentric efforts like Musk’s remind us that we’re capable of amazing things. They’re an antidote to climate-pessimism.