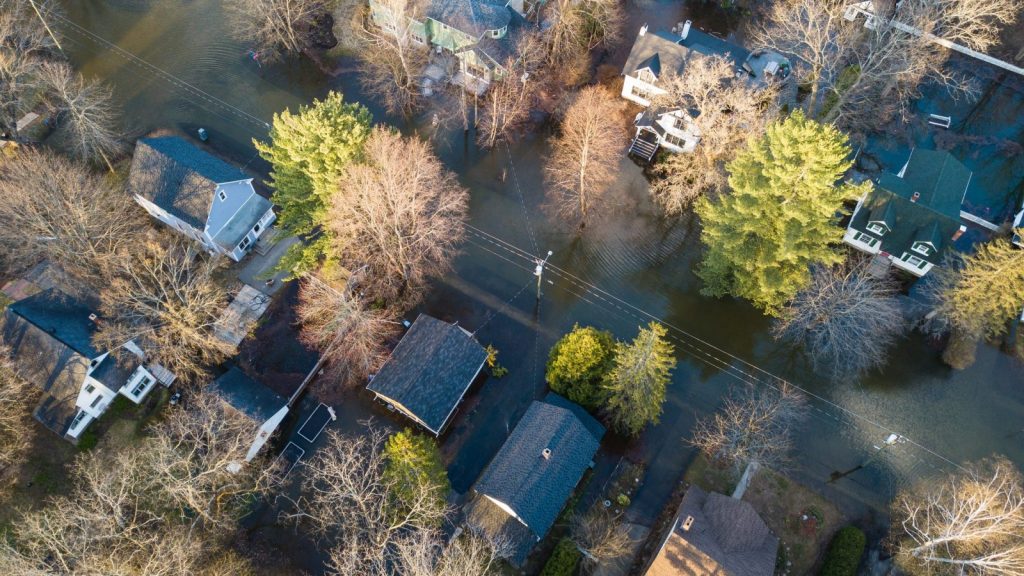 Olga McKissic lives in an airy, white-brick home with a pillared porch, the kind where you might sit and watch fireflies late in the night. The only issue is that every few years, the rising waters from a nearby river pour into her Kentucky home, ascending the porch like an uninvited guest. Her home flooded in 1997, 2006, 2013, and 2015.

“That property that we purchased back in 1986, that we thought was such a wonderful, tranquil, lovely place — it’s a nightmare to live here with the thought that it is going to flood again,” says McKissic in a video produced by the Natural Resources Defense Council. She explains that the first time it flooded, she replaced the carpet with tiles. When the water tore up the tiles, she installed linoleum. And when the linoleum failed to survive the next flood, she settled for just painting the concrete.

McKissic is just one of 30,000 homeowners or renters in the United States who live on a severe repetitive loss property, by National Flood Insurance Program standards. In North Carolina, where flooding from Hurricane Florence continues to threaten homes and lives, there are 1,132 such properties. From 1978 to 2018, the National Flood Insurance Program shelled out over $1.2 billion to North Carolina alone to repair and rebuild properties damaged by flooding, which often need to be rebuilt all over again after the next flood.

So why do homeowners all over the country invest in flood-prone property in the first place? One issue is that they don’t have enough information to know better. Due to an insubstantial patchwork of flood risk disclosure laws, “many Americans who are about to make one of the biggest financial investments of their lives have zero knowledge of whether a house has flooded and is likely to flood again,” according to research published last month in a joint project between the NRDC and the Sabin Center for Climate Law.

In 21 states, there are no statutory or regulatory requirements for a seller to disclose a property’s flood risks or past flood damages to a potential buyer, according to the research. The other 29 states have varying degrees of disclosure requirements. Kentucky and North Carolina, for instance, have some requirements, but not enough to protect many homeowners. (View an interactive map of your state’s laws here.)

“What Hurricane Florence and other major flooding events have really illustrated over the past few years is that the nation’s flood risk is getting worse,” explains Joel Scata, a climate and water attorney at the NRDC. “That really sets potential home buyers to be in a bad situation where they are buying property where they are not fully informed of the risk.”

The Carolinas’ vague, insubstantial disclosure laws likely helped contribute to the situation they now find themselves in: While millions of homes at risk of flooding, only 335,000 have flood insurance.

In North Carolina, the Real Estate Commission must disclose that a property is located within a federally designated flood zone, which is based on hundred-year floodplains. That’s the land predicted to flood during a 100-year storm — one so severe it has a 1 percent chance of occurring during any given year. But storms have been getting stronger lately. In the last two years, North Carolina has seen two 1,000-year flood events: Hurricane Matthew and now, Hurricane Florence.

For more accurate flood risk maps, FEMA needs to take climate change into account. “Climate change is a loaded dice, because it makes the risk different,” Scata says. “By not looking at the future effects of climate change on flooding, like sea-level rise and bigger rain events contributing to bigger floodplains, you’re not getting the full picture.”

Scata and the NRDC recommend that states participating in the National Flood Insurance Program should explicitly disclose flood risks. Additionally, FEMA should provide homeowners a “right to know” about their property’s past history and create a public, open-data system to share information related to flood damage.

If better laws were in place, they could help mitigate what has become an unsustainable cycle: real estate developers buying up coastal properties, selling them to unknowing buyers, and then forcing them into a cycle of flooding and buyout.

Another solution is a significantly improved and expanded voluntary property buyout program, where FEMA provides funding for the local government to purchase the flood-prone property and convert it to open space. Currently, the National Flood Insurance Program focuses most of its funding on rebuilding homes, many of which are destined to flood again, and there is only a limited pool of money for property buyouts. As a 2017 report from NRDC puts it: “For every $100 FEMA has spent to rebuild properties through the NFIP, a paltry $1.72 has been spent to help move people to higher ground.”

Oh, and one more thing: The future of flood risk is closely related to what we do about climate change. As Scata explains, “Our future greenhouse gas and carbon emissions will dictate the various levels of sea-level rise. So if it’s going to be business as usual, it’s going to be a lot higher risk than if we take action.”