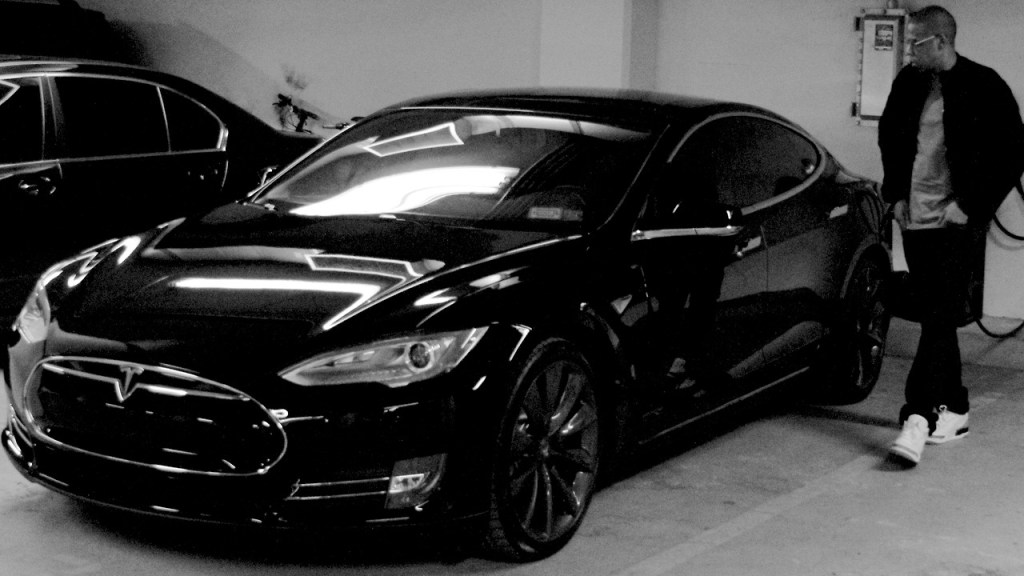 Rappers have been infatuated with cars since the beginning of Hip Hop, with a niche fetish for bulkier models. Early rapper endorsements of Jeeps, Suzuki Sidekicks, and MPVs are arguably what cued the auto industry to expand the SUV market. At one point, you couldn’t find a rap video that didn’t feature a fleet of stretched-out SUVs that probably got about 10 miles off the gallon. The ’98 – ’04 No Limit-Cash Money Records era was when it reached Peak Foolishness, with constant display of Humvees, Escalades, Navigators and other six-to-seven-figure gas guzzlers with shiny hubcaps that did silly, spinny things.

Things then began to die down, perhaps when rappers saw what little utility those vehicles held in Hurricane Katrina floodwaters, or how expensive it was to maintain them in the recession after. But hybrid cars didn’t quite catch on with the culture. They became joke fodder, as evidenced on Childish Gambino’s “Real Estate” where comedian Tina Fey flips a popular Jeezy line to say “My president’s black, and my Prius is blue, motherfucker.”

Listen to Fey parody herself, and the Prius, in the video below. (The song, and others in this post, are NSFW. Fey comes in around 5:00.)

But then that dude Elon Musk came out with the sleek Teslas and now Hip Hop has a non-petro-fried whip it can ride with. Kanye West shouted out Musk at Bonnaroo, and now it looks like Jay Z might have a new “murdered out” Model S. Other rap and trap stars are upgrading their status symbols, replacing the traditional B-list of cars (Beamer, Benz, Bentley, Bugatti) with those of the battery-charged variety.

In G Unit’s recent comeback attempt, “The Beauty of Independence,” 50 Cent — one of the biggest car whores of all time — raps, “I ain’t a BMW, I’m elecTRICK.” This matters if only because we know his early endorsement of Vitamin Water led to Coca Cola buying the company for a few billion. Now Google Glass is working with him. Could he also help tilt the market toward electric cars?

We’ve heard a few other rapper’s reference these cars, and not just as ostentatious floss. Here’s Canibus (yes, he’s still rapping. LL did not totally murder him.) recounting a murder mystery in his song “Sinflation”:

Common also uses it in storytelling mode for his song “Hustle Harder,” describing how a nameless female protagonist sizes up her economic prospects:

Beamer Benz, she got friends with high ends/She know trends, she know when/She go in, like an investor/Yes sir, never get gassed like a Tesla/Ain’t about all that extra…

Common might have been listening to Cunninlynguists who used a similar simile in their song “Hot”:

All these girls, man, they just want me to sweat ’til I starve, but I don’t get gassed up like an electric car…

And then there’s this from producer Alchemist featuring Odd Future’s Domo Genesis and Hodgy Beats, along with Freddie Gibbs, for a rhymefest that makes no mention of the car, though the song is named after it. (It might also be named after Nikola Tesla. As with most Odd Future songs, the lyrics give us no clues.)

We’ll see where this goes. Hip Hop artists are classic tastemakers, having elevated otherwise obscure or mediocre brands into consumer must-haves. A few more key endorsements and we might be able to get those Teslas produced to the point where regular people can actually afford them.