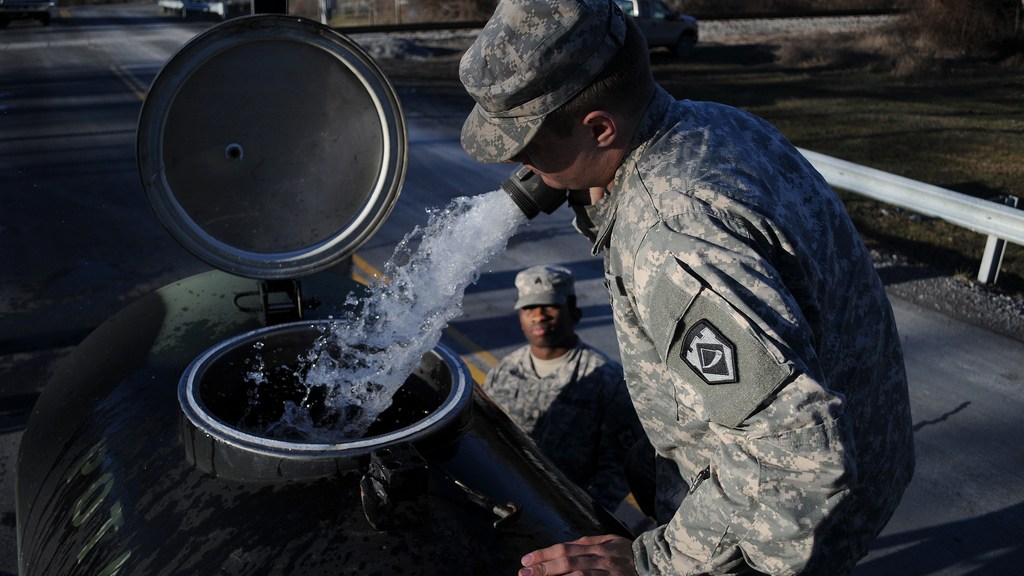 The area around Charleston, W.Va., has been brought to its knees by contaminated drinking water. Thousands of gallons of an industrial chemical used for treating coal, MCHM, leaked last week from a company’s steel tank, flowed down the bank and into the Elk River, located just a mile upriver from the intake point for the region’s drinking water treatment plant.

Residents quickly noticed the licorice smell and a few hours later were officially warned not to drink or cook, wash, or bathe with the water. A state of emergency was declared in nine counties. Schools, hospitals, restaurants, hotels, and more closed. About 300,000 residents were affected.

We take the quality of our drinking water for granted, and for good reason. More people in the United States have access to safe water than ever before. Yet recent events raise an obvious concern: How safe is our drinking water really?

This question is both timely and timeless, for water providers have constantly defended water sources against contamination. From well before the Romans through today, they have always faced three broad classes of threats.

The first comes from natural contaminants — pathogens we expect to find in water. Despite images of clear, burbling springs and mountain streams, the simple fact is that fresh water is just not very clean. Teeming parasites, viruses, and bacteria live in water. Just a hundred years ago, dying from waterborne typhoid or cholera was commonplace in the United States, and deadly epidemics still break out in some parts of the world today. The addition of chlorine to water supplies a century ago largely eliminated these scourges. We have since become very good at eliminating biological pathogens with chlorination, ozonation, ultraviolet radiation, and filtration as redundant lines of defense. Nonetheless, vigilance remains necessary. Just two decades ago, a treatment plant piped contaminated water to Milwaukee residents, sickening one-quarter of the city’s population. Sixty-nine people died.

Intentional attack presents the second class of threat. While Sept. 11 focused immediate attention on drinking water, these are hardly new concerns. Poisoning the enemy is a long-standing military strategy. When Solon of Athens laid siege to Cirrha circa 600 B.C., he ordered that poisonous hellebore roots be placed in the local water supply, making the Cirrhaeans violently sick. In 1941, concerned over domestic attacks from Nazi or Japanese agents, J. Edgar Hoover warned about the vulnerability of water supply facilities “due to the strategic position they occupy in keeping the wheels of industry turning and in preserving the health and morale of the American populace.”

There have not been any successful major attacks on American water supplies, but the threat and fear remain because our water supplies cannot be fully protected. We could erect more fences, higher fences, locks, security cameras, and hire more guards — and we have — but with more than 75,000 dams and reservoirs, more than 160,000 drinking water facilities, mostly owned and operated by local government and private parties, 2 million miles of pipe and millions more access points, these measures will never make us completely safe. Our water systems present an impossibly big target to protect from intentional acts or accidents.

The good news is that poisoning a water system is hard to do. Putting a few drops of cyanide in someone’s glass will lead to a gruesome death. Putting a few drops, or even a few barrels, in a reservoir is pointless. Reservoirs generally hold anywhere from 3 million to 30 million gallons of water. Even assuming one could back several trucks up to the reservoir and dump their loads without being detected, one would still need to get huge quantities of the poison in the first place. The Department of Homeland Security keeps track of biological and chemical agents that might be used by terrorists, and these substances are not easy to come by in large quantities.

The last class of threat comes from accidents, as occurred in West Virginia. In many respects, these are the most difficult to plan for because there are so many potential contaminants. The MCHM passed directly through the treatment plant into water mains because the plant was not designed to deal with this chemical. It’s not supposed to be in our water. Nor are the thousands of other hazardous chemicals stored and transported around the country. Many tanks are located near a river or lake intentionally, to make transport cheaper. But accidents happen — tanks can leak, trains can derail. Hence the challenge for water suppliers is how to protect against low-probability, high-impact events.

Because our overall water system from headwaters to tap is simply too large to prevent any contamination, either intentional or accidental, it becomes critical to detect threats quickly, identify the contaminants, and take proper precautions so people don’t drink the water. As a result, improved monitoring is where much of the current action lies.

The town of Loveland, Colo., for example, keeps a tank of drinking water full of trout. When the trout start to die, the water managers know something is wrong with the water and investigate. Bigger systems take multiple measurements at different points in the system every day. Following the 9/11 attacks, New York City increased the number of daily water samples. It now tests its tap water more than 330,000 times each year.

The next generation of sensitive monitors will detect a range of contaminants in real time. DNA microchip arrays, immunological techniques, micro-robots, flow cytometry, molecular probes, and other emerging technologies could be placed throughout the water system to provide rapid warning of contaminants early enough to allow quick responses by water authorities.

A utility could harden infrastructure. It may extend distribution pipes or build two treatment plants instead of one, allowing it to draw water from different sources during an emergency. Pipes may be buried instead of elevated. Virtually every construction choice, in fact, might look different if security became a top design priority.

Former New York City Mayor Michael Bloomberg has stated the challenge clearly: “Our drinking water really is the lifeblood of this city, and that, unfortunately, might make it a target for sabotage. We need to be vigilant in protecting our water systems.” This is equally true for accidents. Left unsaid, though, is a vexing challenge.

As with so many policy issues, knowing what to do is only half the battle. You also have to pay for it. System hardening and improved monitoring are expensive. Emerging detection technologies are unlikely to be developed commercially if the market payoff appears small.

Our water systems, though, remain deeply underfunded. A water main bursts somewhere in the country every two minutes. Some cities have pipes that were laid just after the Civil War. In this budget-conscious environment, upgrading plants to treat for every imaginable chemical is not going to happen, nor perhaps should it.

While it’s an obvious question, asking whether our drinking water is vulnerable is not really helpful. It is vulnerable. The question is how vulnerable, and how great the risk of harm compared with other potential threats.

Our water systems are well designed to prevent natural contaminants from getting into the pipes and coming out of the tap. Poisoning from large-scale attacks remains difficult, given the precautions already in place and the sheer volumes needed to poison a large water supply. Accidents, though, give special cause for concern.

While the recent events in West Virginia — a chemical tank leaking into a river just upstream of a regional water plant’s intake source — may seem like a rare confluence of factors threatening water quality, it would be foolhardy to ignore this as a one-off event. At least two lessons should be clear.

First, we need to pay closer attention to the structural integrity of chemical storage near water bodies. At a time of reduced agency budgets and pressure for deregulation, we need to acknowledge that officials ensuring compliance with health and safety regulations, such as tank safety requirements, keep us safe. Second, water authorities need the resources to ensure effective detection and rapid communication. These are critical in minimizing harm when threats do arise.

Benjamin Franklin wrote that “When the well’s dry, we know the worth of water.” He also observed that “An ounce of prevention is worth a pound of cure.” We would do well to remember both.

This story was produced for Slate as part of the Climate Desk collaboration.