This week’s 2015 Detroit Auto Show is a favorite of the automotive press, and not only because, in a city with a current population of 19 people, each attendee gets to stay in his or her own neighborhood. The show is an annual highlight of what’s hot, what’s new, and what’s next in the wonderful world of wheels. And what’s hot this year, you ask? Well, it looks like green tech is on a roll.

Now, we know that cars aren’t going to save the world. But the fact is, for the moment at least, we’re stuck with them, and if they can get a lot greener, that’s a little less grease on the flume to climate hell. So let’s take a look at what’s on tap, shall we?

Probably the biggest news from Detroit is that General Motors has given up on marketing major douchebaggery, and is instead doubling down on electric vehicles. The 2016 Chevy Volt increases the car’s electric range from the current 38 miles to 50, enough to cover 80 percent of the trips most people take in their cars, according to the company. If you need to go farther, the gas motor kicks in to assist. (For the gear heads, that motor also helps launch the Volt to 60 mph in just 8.4 seconds, leaving Priuses and the Amish in its dust.)

Even more important, however, was Chevy’s new show car, the all-electric Bolt, which shows that The General is committed to electric vehicles and the letters “O,” “L,” and “T.” (I hear the new Chevy Molt runs on skink scales and chicken feathers, and the Zolt will be the official car of this guy.) The Bolt is a small car with a high, crossover SUV roof and seats for five. It’s as cute as a whole big bag full of buttons, and, according to GM CEO Mary Barra, will have an electric range of over 200 miles. To put that in perspective, that’s enough to take 200 one-mile trips!

Unlike Tesla’s fat-cat wagon, which easily eclipses $100,000 with options, the Bolt is expected to price around $30,000 with incentives. Not cheap, but you don’t have to buy gas, and if you can somehow sneakily plug it into your neighbor’s house, it should be competitive for many families. The Bolt is a show car for now, but the production version is expected to be remarkably similar, if a bit less fancy. 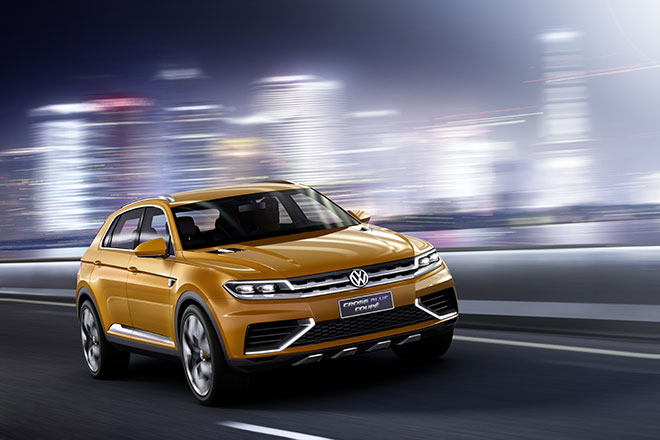 Other manufacturers are getting into the game too. Hyundai introduced a plug-in version of the Sonata Hybrid, a large family car that gets 42 mpg. Mercedes launched the C350 Plug-in Hybrid, which boasts an electric range of 20 miles and a zero to 60 time under six seconds. (Granted, calling a car with a rainforest worth of wood on the dash, and the hides of enough cattle to fart-fill the Super Dome, “green” seems an exaggeration.) And Volkswagen showed its first plug-in hybrid concept, the Cross Coupe GTE, a sporty crossover that looks like Darth Vader sat on his hat.

Other potential fuel-saving technologies at the show included the use of lightweight materials and Ford’s new 10-speed transmission. And proving that Elon Musk’s Tesla is making waves on more than just the tech front, Toyota made more than 5,600 of its patents for fuel-cell vehicles available to other carmakers. So we got that going for us. Which is nice.

Of course, the biggest winners in all of this are the future Ayatolas of Rocknrollas of the dystopia we’re headed toward. But then, when most of the gas is gone and we all live in the suburbs of Barter Town, a nice Chevy Bolt will be a lot more practical than the last of the V-8 Interceptors. Plus, every gallon of gas we save now is one less mohawked mutant we’ll have to battle then.