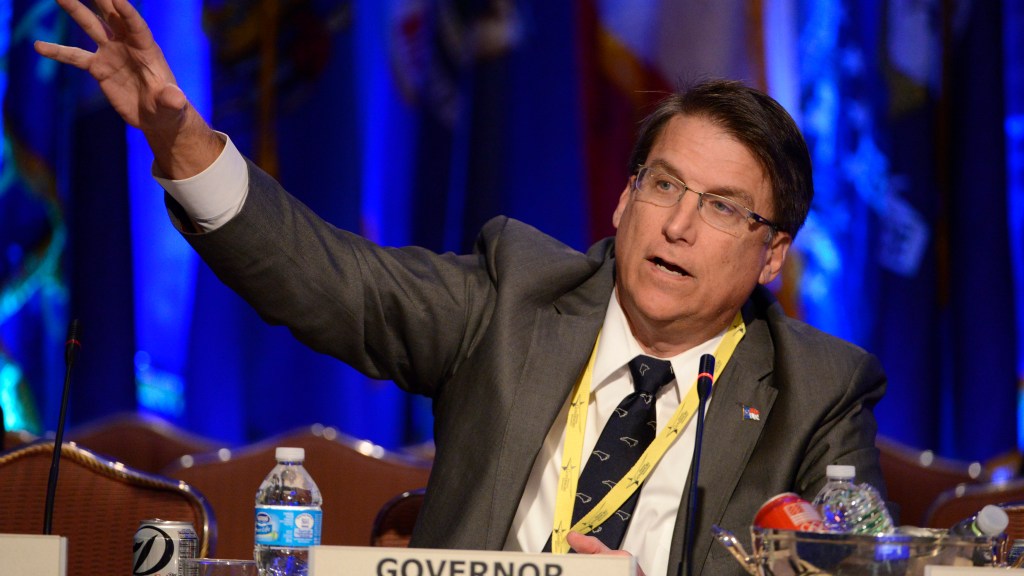 North Carolina Gov. Pat McCrory (R) has been in the news lately thanks to HB2, a bill he signed into law in March that forces transgender folks to use the bathroom of the gender on their birth certificates. The backlash for McCrory — who is up for reelection this year — was swift. Along with a myriad of businesses who have threatened to pull out of the state, North Carolina residents themselves are protesting in creative ways: An “air horn orchestra” regularly performs outside the governor’s mansion in Raleigh, a Durham-based advertising firm is giving away toilet paper printed with the text of HB2, and activists delivered a porta-potty to McCrory’s lawn.

But HB2 isn’t the only issue that has North Carolina media outlets asking questions about McCrory, who is up for re-election this November. There’s also the governor’s cozy ties to Duke Energy and allegations that his administration let the company off easy after serious pollution violations.

The story goes back to 2014, when Duke Energy — McCrory’s employer for nearly three decades — was responsible for a spill that dumped 40,000 tons of toxic coal ash and 27 million gallons of wastewater into the Dan River, one of the largest coal ash spills in the nation’s history.

Initially, Duke was fined $25 million by the state, but in a retreat that many residents found disappointing — and fishy — the North Carolina Department of Environmental Quality (DEQ) later privately negotiated the fine down to just $7 million. When the deal was announced in September 2015, an attorney for the Southern Environmental Law Center called it “a total surrender and collapse by DEQ.”

An investigation by TV station WRAL later found that McCrory and DEQ officials secretly met with Duke Energy leaders, including company CEO Lynn Good, at the governor’s mansion in Raleigh a few months before the fine was lowered.

Duke, as it happens, donated $3 million to the Republican Governors Association soon after the 2014 coal ash spill. The association, which contributed to McCrory’s campaign in 2012, is expected to be a big backer of his reelection effort this year.

But the low fine wasn’t the only favor that the McCrory administration appears to have done for Duke Energy.

After the Dan River spill, investigations found that Duke had more than a dozen coal ash storage sites across the state, many of which were leaching a carcinogen called hexavalent chromium into the water table. After this was discovered, 240 households located near coal ash sites were told not to drink from their wells. Duke Energy started supplying bottled water to those households in April 2015, as WBTV reports.

But a year later, the DEQ and the North Carolina Department of Health and Human Services reversed the do-not-drink order. Residents were told their water was just as safe as water coming from public utilities.

That wasn’t true, WBTV reports. Some of the wells near Duke’s facilities were found to have levels of hexavalent chromium hundreds of times higher than the average level in the state’s public water systems.

So why the about-face by the state agencies? Duke Energy, it turns out, lobbied the state to reverse the do-not-drink order, according to the TV station. When state epidemiologist Megan Davies was deposed by a lawyer for the Southern Environmental Law Center, she said that she and her boss questioned the reversal. She also said that McCrory’s office intervened in the wording of initial do-not-drink letters sent out in April 2015.

Still, the Department of Health and Human Services insists that the water contamination is nothing to worry about. “The water in these wells meets the standards of the Safe Drinking Water Act,” Kendra Gerlach, communications director for the agency, said in a statement. “Allowing the affected residents to return to drinking their water is within federal and state guidelines and is consistent with safe drinking water practices across the country.”

For those who live near Duke’s coal ash sites, however, the state’s position doesn’t bring much comfort. In the year between the do-not-drink order and its reversal, nothing has changed. The coal ash sites weren’t cleaned up and the carcinogen didn’t go away. In fact, one thing has arguably gotten worse: In March, McCrory shut down the commission charged with overseeing the cleanup of Duke’s coal ash sites across the state.

“The water isn’t any different,” said Tad Helmstettler, an environmental health supervisor in Rowan County, one of the areas affected by the order. “If you were worried about the water before, you should be worried about it now.”

If polls are to be believed, McCrory has his own reasons to be worried: His approval rating is at an all-time low, and he’s in a tight race with Democratic challenger Roy Cooper. And as the spotlight shines brighter on HB2, as well as the governor’s ties to Duke Energy, McCrory’s prospects may only get darker.