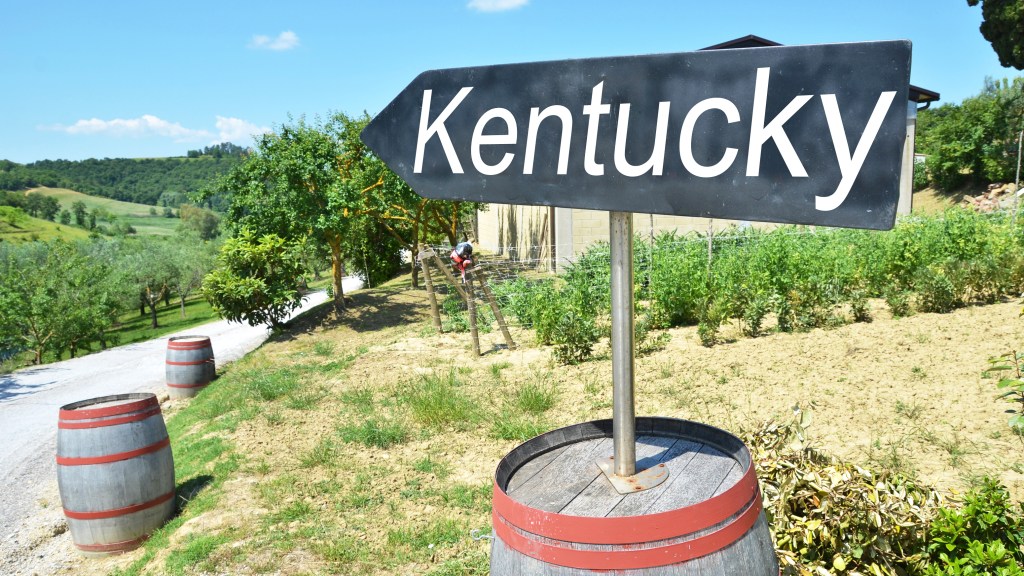 “There is no red Kentucky or blue Kentucky. There is only charcoal black,” James Higdon wrote in Politico in 2014, noting the dominance of the coal industry in the state.

Two years later, we’re starting to see that change. In Kentucky’s Tuesday primary, the ballot includes a handful of politicians who are no longer railing against the “war on coal,” but are trying to reckon with what happens after coal mines shut down.

This is easiest to see in the Democratic presidential primary. While campaigning in Kentucky and West Virginia, Hillary Clinton and Bernie Sanders mostly resisted pandering to coal country. Sanders, an outspoken critic of fossil fuel production, won the West Virginia primary. Clinton said, “We’re going to put a lot of coal miners and coal companies out of business,” and got a lot of backlash for it. She offered a qualified apology, emphasizing her $30 billion stimulus plan for mining communities, but still insisted, “we’ve got to move away from coal and all the other fossil fuels.”

What’s happening in a little-watched Senate primary is even more interesting than the presidential race.

There are six Democrats running to compete against Republican Sen. Rand Paul this fall. The frontrunner on Tuesday is Lexington Mayor Jim Gray, and one of his challengers is Sellus Wilder, an underfunded environmentalist.

Gray hasn’t said much publicly about climate change or controversial policies like President Obama’s Clean Power Plan, but Wilder has. He considers coal to be a problem not only because it contributes to climate change, but also because it threatens public health. Instead of propping the coal industry up, he would prefer to see Kentucky work toward building a new, more sustainable economy. Most surprisingly, he says the “‘war on coal’ is kind of made up.” When confronted by miners in eastern Kentucky, Wilder says he doesn’t think these jobs are coming back – EPA or not. That’s why he’s calling for federal grants to support education in the state, build up new infrastructure, and provide economic relief.

“Until we’ve settled the fact that killing environmental regulations won’t bring coal back, we can’t move on to the next question: What we can do?” he said in an interview with Grist.

For Kentucky, “it is a first that a serious candidate with some serious statewide credibility is calling for an end to coal,” Climate Hawks Vote founder R.L. Miller said.

“I find it difficult to talk about [climate change] because it’s such a partisan issue and it seems that facts don’t really factor into the debate really well,” he said. “I find a lot more traction talking about things that affect people’s lives. I make a lot more progress talking about things like energy efficiency and the costs of air pollution and the fact that Kentucky has epidemic levels of lung cancer, heart disease, and issues that are all directly related to air quality.”

Wilder is a long shot to win the primary on Tuesday, and neither he nor Gray stand much chance against the incumbent Rand Paul.

Still, Wilder’s candidacy is a sign that political wisdom is shifting in the state. As Stephen Voss, a political scientist at the University of Kentucky, explains, a “substantial portion of the Democratic rank and file would like to see their party, and their statewide candidate, hew more closely to the national party’s environmental platform, but they have enjoyed only limited success so far.”

You could see signs of this in 2014 as well. Democratic Senate candidate Alison Lundergan Grimes ran against longtime Republican Sen. Mitch McConnell, and lost. She pandered to the coal industry, and split with her party over the Clean Power Plan and on climate action. That may have hurt her more than it helped, say some Democrats like Wilder, because it didn’t win her much support among the coal community. But it did alienate progressives. On the same ballot, Rep. John Yarmuth, the only Kentucky congressman to win the Sierra Club’s endorsement, ended up earning 12,000 more votes than Grimes in the Louisville area.

Since we’re talking about Democrats here, we’re talking about a small portion of voters in Kentucky. Kentucky is not on the verge of becoming blue. And Republicans aren’t changing their approach yet. They’ll promise anything short of unicorns to coal miners this fall.

But if Democrats are starting coming around, then it may mean coal is finally losing its grip on politics, just like it lost its grip on the economy.