Offshore wind is finally — finally! — coming to the U.S. Here’s what you need to know. 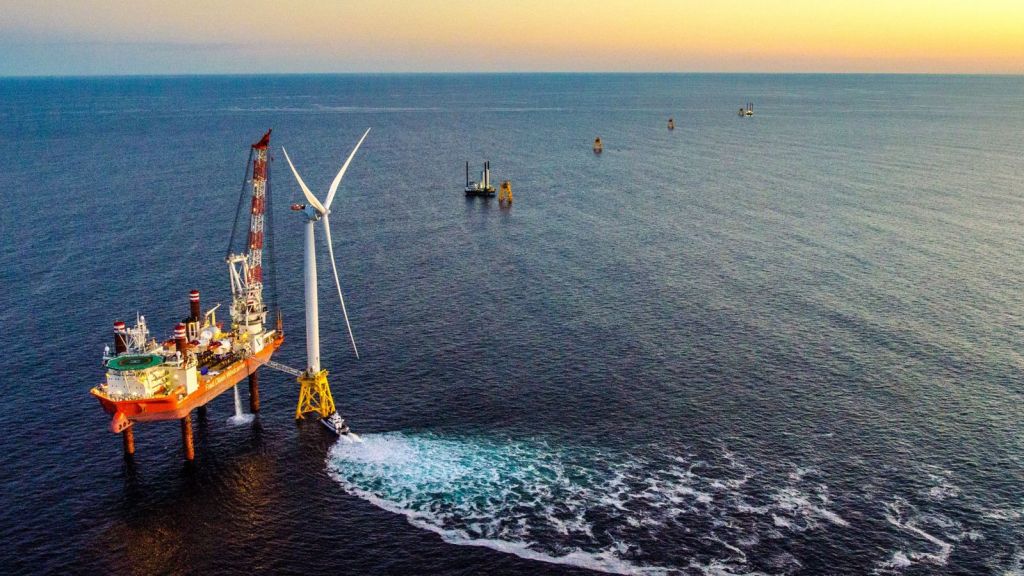 Offshore wind is finally — finally! — coming to the U.S. Here’s what you need to know.

A key moment for the future of clean energy in America will take place in the frigid waters of the Atlantic in two months.

That’s when the country’s first offshore wind farm will start sending electricity through a submerged cable line to the mainland and into the electrical grid. Sitting three miles off the coast of Block Island, Rhode Island, the farm is supposed to generate enough energy to power 17,000 homes. That may be a tiny number compared to the 23 million homes that the feds want powered by offshore wind by the year 2050, but it’s the precedent that counts.

The potential for offshore wind power is enormous. The Department of Energy thinks offshore wind could one day deliver twice as much electricity as Americans used to keep the grid stable last year. The federal government needs offshore wind to deliver on this promise if it’s going to have a shot at fulfilling its commitments to cut greenhouse gas emissions under the Paris climate agreement.

But first power companies have to see how well offshore wind turbines work. There are some formidable challenges. Underwater land is cheap, and wind is free, but installing any kind of infrastructure underwater is tough, expensive work. Electricity is so cheap in most parts of the country that new renewable energy technology can’t compete.

Deepwater Wind, the company behind the turbines, lucked out when it found Block Island. While not all of the island’s residents are thrilled about the windmills, they were already paying some of the highest utility rates in the country, all of it from generators burning diesel fuel.

In a recent interview, Jeffrey Grybowski, Deepwater Wind’s CEO, talked to me about his company’s plans and why the first wind farm in the U.S. just happens to be off the East Coast. What follows is an edited and condensed version of our conversation.

Q.Why are you putting the wind farm in the Northeast, instead of somewhere else in the country?

A.It’s a happy coincidence that the Northeast – the southern Northeast and New York area – happens to be the best place in the United States to build offshore wind. The wind is world-class and the geology is suitable to building offshore. In general, you want to avoid big boulders and bedrock. Basically, what you would consider good soil to drive a post through is the kind of soil we are looking for offshore.

We’re also lucky in that we have communities here on Long Island and Block Island and Southern New England that need new clean energy resources, and that are difficult places to build new projects onshore. It’s hard to find a place on Long Island where you could build a wind farm onshore.

Q.But what about a place like Hawaii? They also have good wind and a strong need for clean energy.

A.The turbines at Block Island are 90 feet deep. If you go fifteen miles off the Pacific coast you are thousands of feet deep. Hawaii is basically the tip of a mountaintop.

So the solution you would need to go to the Pacific is a structure that floats. There are no commercial floating wind farms in the world today – just a handful of R&D projects. The technology just isn’t quite ready.

But there’s a big difference between the East Coast and the West Coast. On the east coast you have a continental shelf that keeps water a few hundred feet deep for miles and miles. We could have farms from Maine down the Atlantic coast.

Q.How did you decide which turbines to use?

A.We talked to major manufacturers of turbines and chose a 6-megawatt turbine made by GE. It’s very advanced technology – it has a permanent magnet generator, which has no gearbox. We needed a turbine that could handle consistent wind and extreme conditions. We will do annual preventative maintenance with a technician going out to work on the turbines over the year, but these turbines are designed to operate on their own.

Q.You have said that this wind farm will create jobs. Now that the turbines are finished, how many people will be left to keep them running?

A.We’ll have six people locally whose job it is to keep turbines running. Building it, we used a combination of U.S. and European contractors. The foundations that sit on the seabed – those are made in the U.S. They’re used in the Gulf of Mexico with firms that work in the oil and gas industry.

Q.So, basically, these turbines are using technology that was developed for offshore oil drilling?

A.Yeah, they’re a little different, though. Instead of building one big platform, we’re building several different platforms that hold turbines.

Q.What happens to an installation like this in a hurricane?

A.Well, the first thing is that we produce a lot of power. Storms are good for offshore – in the days before and days after there is a tremendous amount of energy in the atmosphere. If a storm passes very close to the wind farm at a certain speed – about 56 miles per hour – the turbines will automatically switch off and ride through the storm.

Q.How is Deepwater Wind’s second project on Long Island going to be different?

A.Long Island is a much larger and more complicated case than Block Island. It has several million people. They have a large variety of electric resources. But the eastern tip where our project would be interconnected has challenges that are somewhat similar – it’s very difficult to get new sources of energy all the way over because of constraints in the transmission system. The Long Island Power Authority was looking for solutions to their need to get energy out to the South Fork. Offshore wind was the best answer to that problem. It’s more cost-effective than new diesel generators.

We’ll serve Long Island with a submarine transmission cable that’s about three times the size of the one on Block Island. This is a very powerful offshore wind site.These turbines are going to be 30 miles off the coast, to the east of Long Island. That’s pretty far out. People on Long Island don’t want it on their beach.

Q.How did you get involved in the Block Island project?

A.I was a regulatory lawyer before I joined the company. Deepwater Wind approached me years ago about how to get regulatory approval to build an offshore wind farm. It was hard because it had never been done.

Q.Do you think that now that it has been done, those regulations are going to become simpler?

A.Well, we have a federal system of government, state and federal agencies that have independent authority. I’m not sure we will ever get to the point where we can skip one level of government and multiple agencies to get something approved. It took 20 different approvals to make Block Island happen. I’m sure there are some ways to simplify. But we have a complicated government.