Big Labor has an identity crisis, and its name is Dakota Access 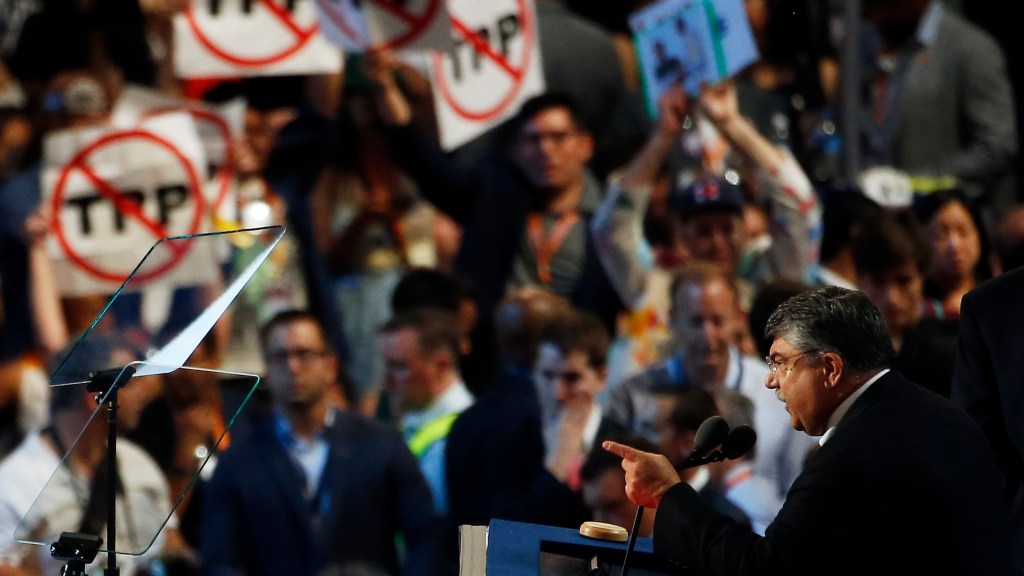 Big Labor has an identity crisis, and its name is Dakota Access

A growing rift has split the country’s biggest union federation, the AFL-CIO. Many labor activists and union members are outraged that Richard Trumka, the federation’s president, threw the AFL-CIO’s support behind the Dakota Access pipeline project earlier this month.

The AFL-CIO’s statement backing the pipeline was announced a week after the Obama administration put construction on hold. Trumka acknowledged “places of significance to Native Americans” but argued that the more than “4,500 high-quality, family supporting jobs” attached to the pipeline trumped environmental and other considerations.

That move rankled many in the AFL-CIO’s more progressive wing, highlighting strains within the federation of 56 unions representing 12 million workers. Recent tensions within the AFL-CIO have deepened a long-running divide between a more conservative, largely white, jobs-first faction and progressive union members who are friendly to environmental concerns and count more people of color among their ranks.

Grist interviewed five staffers at the AFL-CIO and its affiliated unions on the condition of anonymity because they weren’t authorized to speak to the press. Trumka’s public support for the pipeline caught these senior-level and mid-level staffers by surprise, they told Grist — especially because he had recently taken progressive positions on Black Lives Matter, immigration, and criminal justice.

A call to Trumka’s office was not returned. The federation’s policy director, Damon Silvers, who is said to have helped write the statement, also did not respond to an interview request.

Union opponents of the pipeline project and their advocates quickly responded on social media with satire. One post on Twitter likened Trumka’s position to helping the wrong side in Star Wars.

"The AFL-CIO calls on the Palpatine Administration to allow construction of the Death Star to continue." #NoDAPL pic.twitter.com/WMkKoaphyg

Other frustrated union members and staffers placed calls to Climate Workers, an organization of union workers focused on climate justice, to vent. Brooke Anderson, an organizer at the group, says she fielded dozens of calls from members upset about the AFL-CIO’s position.

For those members, Anderson says, working in a federation means more than collecting a wage — it means being part of a broad movement for justice. Anderson says she thought that Trumka’s statement undermined efforts by groups like hers to protect the environment and jobs.

Trumka’s statement came out the day after one branch of the federation, the Building and Construction Trades, sent a private letter to Trumka complaining about AFL-CIO unions that opposed the pipeline.

In the weeks before Trumka’s public statement, four of the federation’s major unions – the Communications Workers of America (CWA), the Amalgamated Transit Union (ATU), National Nurses United (NNU), and the American Postal Workers Union (APWU) – came out in support of the Standing Rock Sioux Nation’s battle against the pipeline project. All four are part of the so-called Bernie Unions, given their support of former Democratic Presidential candidate Sanders. The AFL-CIO endorsed Hillary Clinton in June, shortly before Sanders had conceded his candidacy, marking another fissure in the federation.

In a five-page letter to Trumka provided to Grist by union sources, Sean McGarvey, president of the Building Trades, argued that these four unions were partly to blame for Obama’s suspension of the pipeline. He wrote that union workers employed to build the pipeline have had “their lives placed on hold, their employment prospects upended and have been subjected to intimidation, vandalism, confrontation, and violence both on their job sites and in the surrounding community.”

The letter offers an anecdote to support these allegations. One unnamed worker was reportedly scared for his or her life by protestors “coming towards us.” The workers jumped in their cars and fled, according to the account, but there’s no mention of anyone getting hurt or even touched. (The Standing Rock Sioux Nation has called for protests to remain peaceful as the movement to stop the pipeline has grown.)

McGarvey blames unions opposed to the pipeline for hastening “a very real split within the labor movement at a time that, should their ceaseless rhetoric be taken seriously, even they suggest we can least afford it.”

Progressives within the labor movement describe the Building Trades as being whiter and more conservative than their counterparts. McGarvey’s letter contains what some of them consider dog-whistles. It mentions “outside agitators,” “environmental extremists,” and takes a jab at “theories of the 21st century labor movement.”

McGarvey declined an interview request from Grist, writing in an email that “[The letter] was an internal communication and we don’t comment on those!”

AFL-CIO union members who oppose the pipeline are now making their frustration public. A handful of labor activists picketed the AFL-CIO’s office in Washington, D.C., last week. And the Labor Coalition for Community Action, an alliance of groups representing women, people of color, and LGBT union workers within the AFL-CIO, released a statement in solidarity with those opposed to the pipeline.

“As organizations dedicated to elevating the struggles of our respective constituencies, we stand together to support our Native American kinfolk – one of the most marginalized and disenfranchised groups in our nation’s history – in their fight to protect their communities from further displacement and exploitation,” it says.

Although the statement makes no direct mention of the AFL-CIO’s position on the pipeline, nor of McGarvey’s letter, it calls on “the labor movement to strategize on how to better engage and include Native people and other marginalized populations into the labor movement as a whole.”

Anderson from Climate Workers, who is a rank-and-file member of the CWA, says the dispute over the pipeline represents a historic moment for the AFL-CIO. Rather than issue a statement and ignore the fallout, she says Trumka needs to participate in a crucial conversation with a wide variety of people about how the federation will balance race, labor, and the environment.

“Some of the questions [in that conversation include]: Whose land? Whose water? Whose lungs are going to suffer first? It’s communities of color and lower paid workers of color – and they’re also our brothers and sisters.”