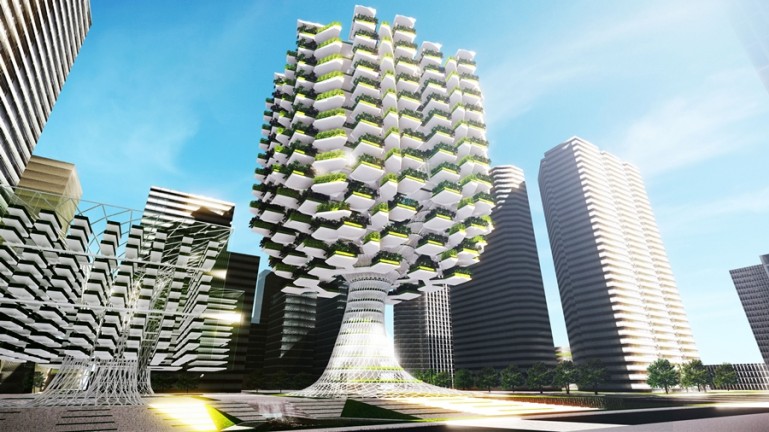 I know what you’re thinking, but Skyfarm is not the latest Tom Cruise sci-fi failure. Skyfarm is one possible solution to a lot of the problems with high-density urban living.

Concieved by the folks at Aprilli Design Studios for Seoul, South Korea, the Skyfarm would be a massive techno tree rising amongst the skyscrapers. The concept would provide arable space to grow crops in a tightly packed city while also providing public green spaces, producing energy, purifying water, and cleaning the air — and the structure’s great height will get that air cleaning up where it’s needed most.

Stu Roberts at Gizmag has the scoop:

The primary structure has a large, root area at its base to provide stability and spread the weight of the Skyfarm out across the ground. A trunk section rises up from the root and spreads out into eight vertical branches that are connected together by trusses to provide structural reinforcement.

The branches each support 60-70 farming decks, which can be described as the leaf sections of the tree. The decks are spread out as much as possible to ensure they receive adequate exposure to sunlight. Each deck has heating and LED lighting systems that are used to create “optimal environmental conditions” for farming.

The Skyfarm design uses a hydroponic system for growing crops, instead of using a soil-based approach. The higher, external leaf sections would be used for fruit trees and larger scale vegetables that need more exposure to air and sunlight, while lower, internal growing areas would be available for items that might thrive better indoors, such as herbs.

Ahh the future, a place where we will abandon all of the long accepted terms used in engineering and architecture and replace them with marketing appropriate nomenclature. Building a Skyfarm? “Superstructure” becomes “trunk.” Building a frat house? “Floor” is now known as “bro-Bedding.”

Cheesy nomenclature aside, the concept is actually pretty rad, although the roughly 13 acres of hydroponic growing space doesn’t sound like it’d make much of a dent in Seoul’s food needs. Still, it’s a start, and it’s certainly cooler than a 20-story parking lot, and I’ll finally get a chance to combine my two great passions, jetpacks and gardening.