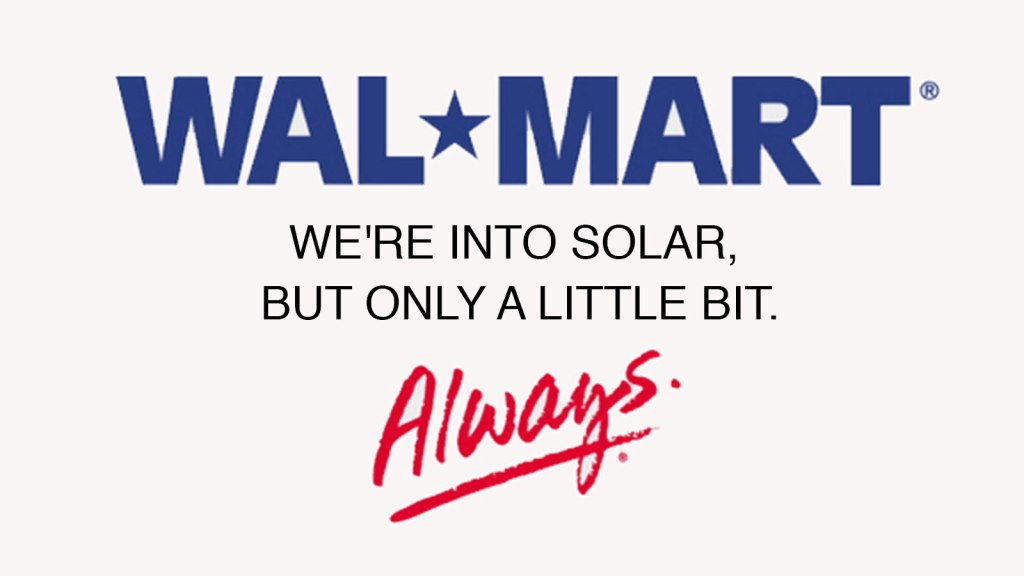 On Tuesday, Slate proclaimed that “Walmart is killing the rest of corporate America in solar power adoption” because the company leads the nation in total “installed capacity” — in essence, it has installed more solar panels than anyone else. In reality, Wally World is a greenwashed clean-energy laggard owned by a family that funds anti-solar groups.

Slate’s data, which show that Walmart has more than double the megawatts of second-place Kohl’s, comes from the Solar Energy Industry Association, a U.S. trade group. But in that same report, Walmart ranked 11th (out of an undisclosed list of megacorporations) in the proportion of facilities with solar power, at just 5 percent. (For comparison, a small business with one facility and one solar installation would score 100 on that test.)

In all, solar, wind, and biomass accounts for just 3 percent of Walmart’s total U.S. electricity use, according to data from the EPA’s Green Power Partnership. And less than one-fifth of the renewable energy the company purchases from offsite is third-party certified, meaning we just have to take Walmart’s word for it. More than 200 organizations in the EPA program meet 100 percent of their electricity use with green sources, including fellow retail giants Whole Foods, Staples, and Kohl’s.

Then there’s the Walton family, Walmart’s majority owner, which is actively undermining renewables. A recent report from ILSR finds that family members have donated nearly $4.5 million to two dozen organizations — including the infamous lobbying outfit ALEC — that lead the charge against clean energy policy.

The family actually owns a company called Solar First, that builds big arrays for big utilities. But while that may seem like a good thing, it means that the Waltons want us all to remain captive utility customers, not produce our own power. The family has worked to block rooftop solar, even scoring a tiny victory in Arizona last year. Customer captivity is a typical family strategy: Walmart tried to pay workers in Mexico with store vouchers.

Solar First, which manufactures its panels mostly in Malaysia, is even working via through the World Trade Organization — the enforcer of globalized free-marketism — to repeal solar incentives in several U.S. states simply because those policies give preference to local producers. Thanks, Walton clan.

In short, the super-rich Waltons and their exorbitantly profitable superstore empire won’t spend an extra dime on green energy if it means foregoing all-out profit maximization. The company’s 2013 Global Responsibility Report apologizes for a decline in renewable energy use thusly: “Walmart U.S. was unable to renegotiate an expiring [renewable power] contract with competitive pricing.”