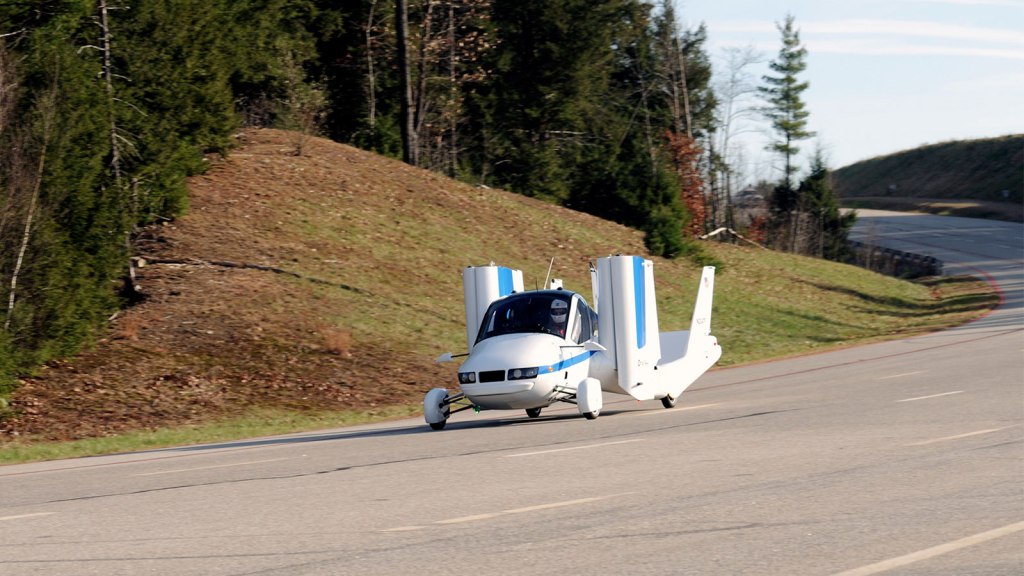 Mark this day in your calendar, for today is the day that you learned that the flying car — humanity’s second noblest pursuit* — is coming soon! Possibly! Again!

Bloomberg reports that 37-year-old inventor Carl Dietrich has already driven and flown prototypes of his Terrafugia Transition, and now the only thing standing in his way is approval by both the FAA and the National Highway Traffic Safety Administration. Yup, just two federal bureaucracies between Dietrich and his dreams. And maybe a few other issues, according to Bloomberg:

Critics say flying cars are unlikely to be both great airplanes and great automobiles. But that misses the point, says Dietrich, who explains the Transition is intended to expand the definition of an airplane, solving a number of persistent problems in the process.

First and foremost is that small planes are virtually useless in inclement weather. If a storm rolls in while you’re flying the Transition, on the other hand, you can simply land at many of the 5,000-plus airports in the U.S. alone, push a button to fold up the wings and hit the road until conditions improve. At home, you can park it on the street or in the typical suburban garage. And it runs on regular unleaded gas, which is cheaper and cleaner than aviation fuel and available at your local service station.

“You’re getting comparable gas mileage to your road car, but you’re going 100 miles per hour over all the traffic,” Dietrich says.

That makes the Transition ideal for weekend jaunts or for salespeople and others whose jobs require regular trips of a few hundred miles — although, at the expected price, even he admits it won’t be within reach of your average salesperson anytime soon.

When the Terrafugia Transition comes to market (when? HA!) it will go down in history as the first ever commercially available flying car AND the worst name ever given to a product of any sort. (My grandmother once had a transition of her terrafugia. Nearly killed her.)

Now, some people will look at the Transition and say, “That death trap is the ugliest/stupidest car I have ever seen.” Others will point and exclaim, “The only thing keeping that from being called a flying coffin is the unlikelihood of it actually flying.” Those are the same naysayers who pooh-poohed groundbreaking inventions like the hydrogen-filled airship, Jar Jar Binks, and New Coke.

A great philosopher — probably Sartre — once said, “The future will have arrived when our cars soar on roads paved with imagination, and the common man can purchase pants that combine the beauty of the dungaree with the supple comfort of the sweatpant.” And while the pajamajean has been around for some time (just check any list of Nobel prize winners for the exact year), the flying car had long eluded us.

But now this marvel of tomorrow is almost here, and not a minute too soon, I’d wager. The Transition really is the perfect vehicle for a post-climate change world. I-95 is underwater from Delaware to the island of Baltimore? Deploy the wings! The kid has to get to the dentist but a band of roving mutants has seized Main Street? Terrafugia, transform and roll out!

*Noblest pursuit? Why, the practical jetpack, of course. Get on it, Science.