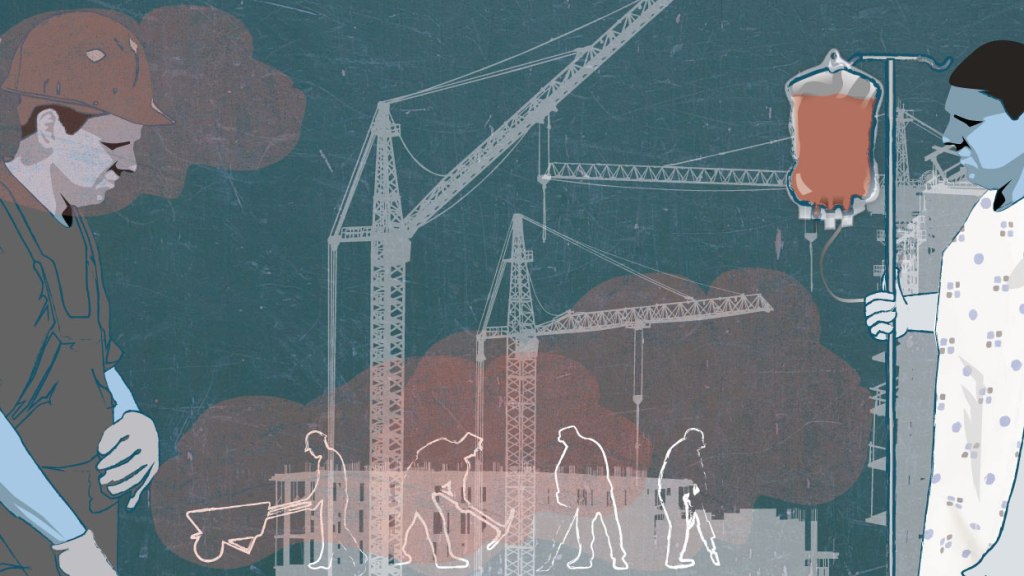 Emilie Udell for the Center for Public Integrity
Business & Technology

The Center for Public Integrity is publishing an important series on toxic exposures in the workplace. Below is an excerpt from a story on electronics workers and chemicals.

In the photograph, a frozen moment of optimism, Yvette Flores is smiling.

It’s the summer of 1979. Yvette, in a flower-patterned dress, is 22 years old and five months pregnant. To her right is her husband, David, a big man wearing tinted aviator glasses, a T-shirt, and an inscrutable expression. They have no idea what’s coming.

Mark Rueda Flores was delivered at the Kaiser Permanente Santa Clara Medical Center on December 3, 1979. There were many problems from the start: His eyes were crossed. His testicles had failed to descend. His hips were dislocated. He was unable to suck on a breast or bottle. His head was covered with large blood blisters, known as hematomas.

By the time Mark was 4, it was clear that he was profoundly disabled. He was still crawling. He wasn’t talking normally. “The words were coming out like a foreign language,” Yvette said.

In December, Mark turned 35. He is six feet tall. Before he had gallbladder surgery last summer he weighed nearly 400 pounds. He speaks mostly in monosyllables, often repeating the last word or phrase his mother says. He watches Sesame Street on a loop and likes trains, forklifts, and Chuck E. Cheese. Not long ago, he learned to draw a circle.

For the first 29 years of Mark’s life, Yvette had no reason to suspect his condition was the product of anything other than misfortune. Had she not heard a radio ad six and a half years ago, she might believe that still.

The ad was sponsored by a law firm. As Yvette remembers it, the announcer asked, “Have you worked in the electronics industry? Do you have a child with these defects?” Yvette: “I go, ‘Yeah, yeah.’ ” She wrote down the phone number and called a few days later.

Risks to workers and their offspring

When it comes to protection against toxic hazards, workers in America are treated differently — that is to say, more callously — than the general public. This legal disparity allows someone who toils inside a factory to face higher risks of cancer and other maladies than someone who lives just beyond the plant fence.

The damage, it turns out, isn’t confined to the workers themselves. Building on science more than a century old, recent studies have found ties between parental exposures and childhood afflictions such as brain tumors, malformations, and learning disabilities. A bicoastal consortium of toxic-tort lawyers has begun targeting electronics manufacturers, blaming chemical-intensive processes for skeletal abnormalities, developmental delays, heart defects, and other problems in workers’ children.

The little-publicized litigation comes on the heels of hundreds of lawsuits filed against IBM Corporation and its chemical suppliers in the late 1990s on behalf of cancer-stricken workers and their injured offspring. It raises questions about the control of teratogens — substances, such as lead, which can interfere with tightly sequenced fetal development — in the workplace.

Across all industries, air samples testing positive for lead by the Occupational Safety and Health Administration from 1984 through 2013 exceeded the exposure limit 40 percent of the time, a Center for Public Integrity analysis shows. Just how many workers have been exposed to unsafe levels of lead in electronics manufacturing is unclear because the sampling was so much more limited.

“There are not enough government protections for the types of exposures that occur,” said Tracey Woodruff, director of the Program on Reproductive Health and the Environment at the University of California, San Francisco. “OSHA’s not even really dealing with cancer, so this is another order down.”

Indeed, OSHA itself says that many of its exposure limits for dangerous substances don’t offer sufficient protection for workers. Parsing 30 years of agency data, the Center found that when air samples across all industries tested positive for teratogenic mercury vapor they were above the legal limit less than 1 percent of the time. But a third of the samples topped the much stricter limit recommended by the National Institute for Occupational Safety and Health.

The placenta was long thought to provide a barrier against most toxic insults to the fetus. Scientists now understand that “it’s nowhere close to a closed system,” said Emilie Rissman, who heads the biological sciences department at North Carolina State University. “It has to get nutrition from the mom and has to get rid of waste, so there is some exchange that has to happen. In the same way that nutrients and oxygen get to the fetus, other things in the mom can come in.”

A father’s exposures also can cause trouble, Rissman said, given that an embryo gets its DNA from both parents. Mutagenic chemicals like dioxins can affect the ability of sperm to fertilize eggs and also can alter genetic material, leading to embryo loss or disease in babies.

“I never questioned anything”

Mark Flores’ mother was born Yvette Yturralde in Carlsbad, N.M., on May 27, 1957. Her family moved to San Jose when she was 2. Her father, Santana, was a plasterer. Her mother, Velma, was a seasonal cannery worker. She had two brothers and one sister.

By the time she was 18, in 1975, Yvette was a few credits short of completing high school. She enrolled in a program that helped her get a GED diploma and find a job. She landed at a company called Spectra-Physics, which made lasers at a plant in Mountain View, northwest of San Jose in what was becoming known as Silicon Valley.

For four and a half years, eight to 10 hours a day, five or six days a week, Yvette worked in a small, stuffy room in Building 5, fusing together glass tubes at a precise angle. A man worked behind her.

Yvette sat at her assembly station with a spray gun, applying a greenish adhesive to the glass tubes and using a blow torch to cure it. A fan turned weakly above her. “It was like no air was coming in there,” she said. When it got too bad, she’d flee to the larger glass-blowing area in Building 5 for relief.

Yvette mixed the adhesive in a beaker using powder from a box and liquid chemicals. “I was never told to cover myself up or anything when I did that,” she said. She would learn many years later that she was being exposed to lead and the solvent methanol, both of which can sabotage a fetus. At the time, she said, “I never questioned anything.”

In 1978, the year before she gave birth to Mark, Yvette had a miscarriage in the women’s restroom at Spectra-Physics. “I had severe cramping. … I went in there and I was bleeding and I just remember being in such excruciating pain.” None of her managers ever followed up, asked if she was all right, she said. She recalls going back to work two days later.

Read the rest of the story.