Charles Darwin made the Galápagos Islands synonymous with the idea of change as a means of survival. In the 19th century, the scientist marveled at how similar endemic finches, mockingbirds, and giant tortoises across the 19-island archipelago were uniquely adapted to individual islands and later theorized that this ability to adapt determines whether a species will survive long term. Today, one of the world’s largest wind-diesel hybrid systems, built on San Cristóbal Island, suggests the human population in the region is capable of the bold adaptive strategies it will need to survive in a post-climate-change world.

Electricity demand on San Cristóbal and the three other inhabited Galápagos islands is on the rise, driven by the growth of population (currently at 30,000 residents) and supported by thriving tourism. A plan to replace diesel electricity generation with renewable energy was already set in motion when, in January 2001, an oil tanker struck a reef and spilled more than 150,000 gallons of diesel near San Cristóbal, threatening the irreplaceable plants, birds, and marine life that had evolved there. 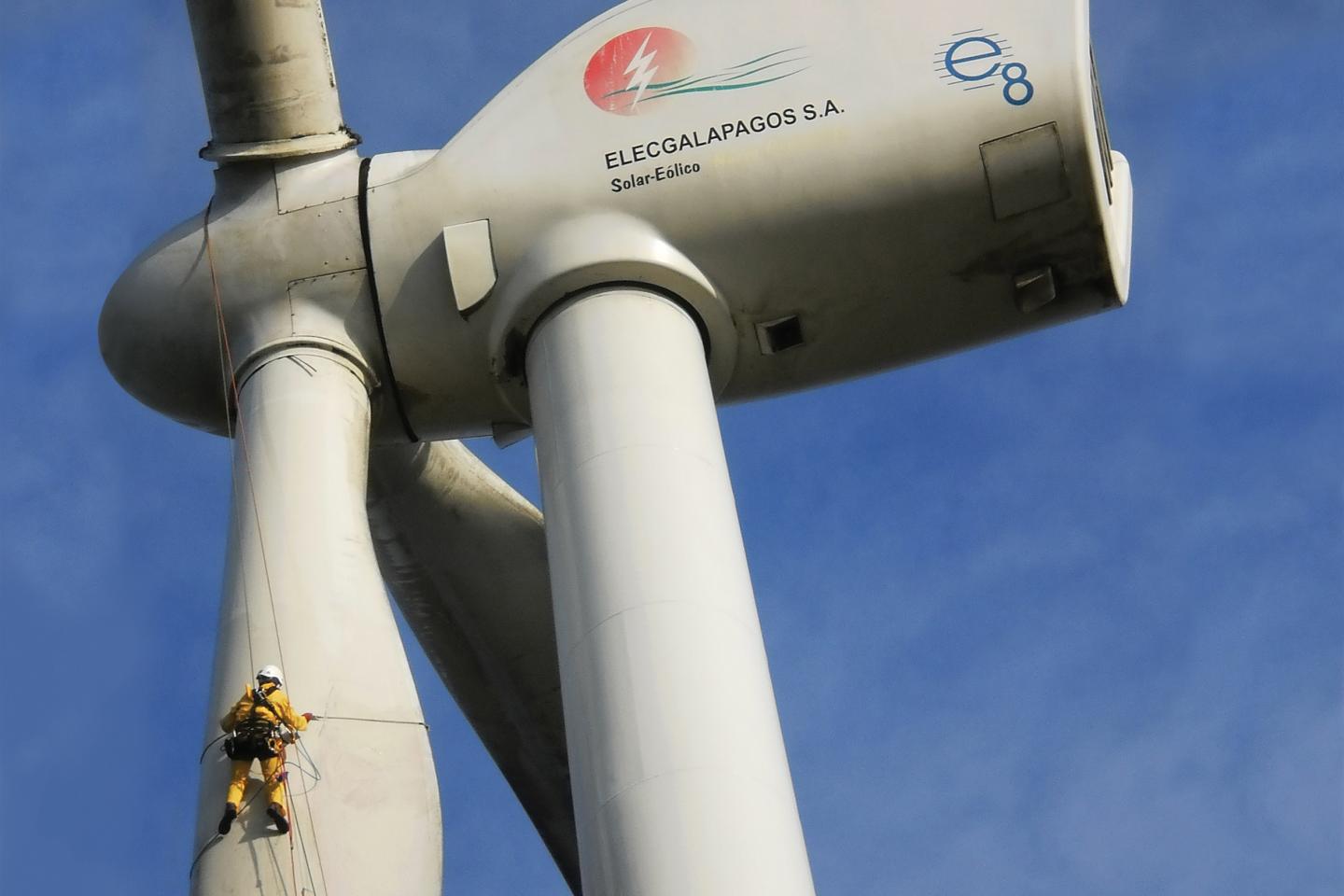 Workers clean the blades on a wind turbine on San Cristóbal Island in the Galapagos. The turbine provides 30 percent of the electricity consumed on San Cristóbal, replacing 2.3 million gallons of diesel fuel and avoiding 21,000 tons of carbon dioxide emissions.Eolisca

Ecuador, with the help of the United Nations, quickly enlisted the help of the Global Sustainable Electricity Partnership, made up of 11 of the world’s largest electricity companies, to reduce the risk of another oil spill at this UNESCO World Heritage Site. Between 2007 and 2015, three 157-foot wind turbines have supplied, on average, 30 percent of the electricity consumed on San Cristóbal, replacing 2.3 million gallons of diesel fuel and avoiding 21,000 tons of carbon dioxide emissions.

San Cristóbal’s energy is now in the hands of Elecgalapagos S.A., the local utility tasked with expanding the project to convert the Galápagos to zero-fossil-fuels territory. They think they can get to 70 percent renewable-energy use in the not-so-distant future. “You have to remember that none of our personnel on the Galápagos had ever seen a wind turbine before we started,” says Luis Vintimilla, an Ecuadorian who has been the project’s local general manager since its inception.

One unexpected problem: Wind turbine blades require regular cleaning, and Vintimilla couldn’t find any locals comfortable in high-altitude conditions. So he hired mountain climbers from the mainland to scrub down the blades. Also new was the job of making sure the turbines had not killed or injured any of the critically endangered endemic Galápagos petrels: large, long-winged seabirds.

The monitoring program’s results have been surprisingly good, considering the common criticism of wind farms as bird killers: Not a single petrel has been identified as hurt or killed. The wind turbines, it seems, are not only keeping the Galápagos green — they’re also making sure the archipelago’s most precarious creatures have a chance to keep on evolving.