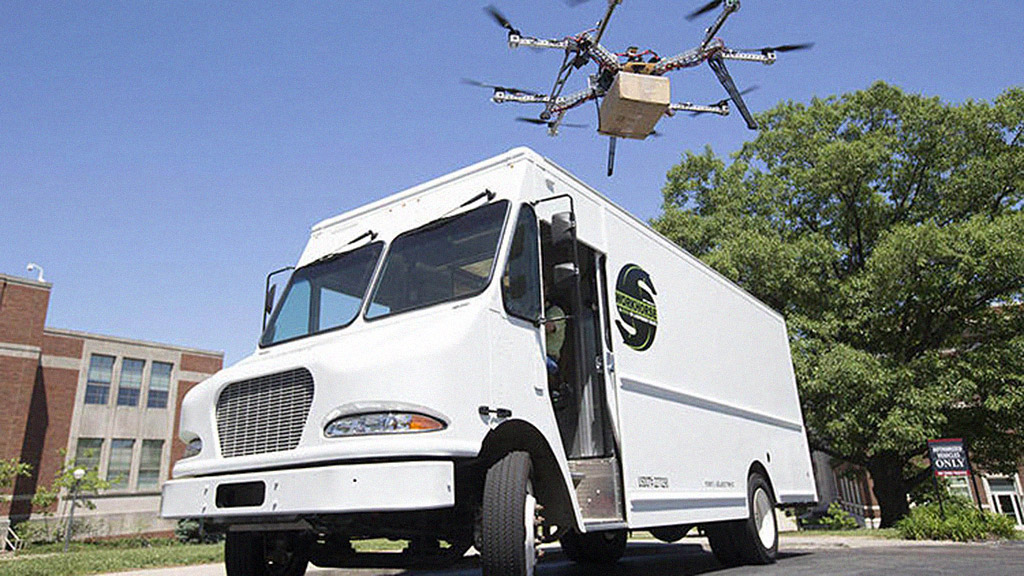 Very soon, your town could be patrolled by a fleet of ultra-quiet electric mother-ship vans, traveling down main arteries, pausing only at optimally calculated locations, then releasing a fleet of autonomous drones to make strategic drops throughout the hinterlands.

Just imagine your horror as you step out of your front door and come eye-to-robo-cam with the hovering machine just as it unloads its package: the ridiculous Christmas sweater your Aunt Gloria in Illinois knitted you. And just in time for Summer in Phoenix.

You may have seen the video released late last year by online retailer Amazon, featuring an octocopter delivering a package from the company’s front door to that of a happy suburbanite. The notion generated the expected terror from the aluminum foil sombrero set, but the fears went further, and for good reason: Do we really trust the decision-making abilities of a company that sells this?

There were doubters among the tech geek set, too, who argued that the numbers just didn’t add up. Here’s the fantastic Marcus Wohlson at Wired:

Picture a typical UPS truck. These generally carry 120 to 150 packages per day per route, a quantity optimized across all the costs of parcel delivery, from gas to labor to truck wear-and-tear. For UPS to make money, it has to put just enough packages on the truck that correspond to a route where the destinations are grouped closely enough to make traveling the distance worth the time and energy. As depicted by Amazon, its drones would make deliveries straight from its warehouses to customers’ homes. To an individual customer, such direct service might seem like the height of efficiency. But to equal the capacity of one UPS truck, an Amazon drone would need to make 120 to 150 round trips per day between its hub and people’s homes–hardly a streamlined vision of the future.

But according to researchers at the University of Cincinnati and Amp Electric Vehicles, drone-and-delivery-truck teams could change the whole equation. Wohlson continues:

The math as described by [Amp CEO Steve] Burns changes radically if that hub has wheels. He says that the fuel cost for running a diesel-powered delivery truck comes to a little more than 50 cents per mile, a price he argues is about as low as diesel technology will allow. The energy to power a drone over the same distance, he says, totals about 2 cents. And it’s that difference that Burns believes will finally convince shippers who can’t squeeze any more savings out of trucks to bring drones along for the ride. “We just think this is really the next step in an industry that’s this refined,” he says.

Now ideally, you’d get off your couch and stroll on over to the local mercantile to make your purchase in person, assuming Amazon hasn’t already destroyed said store. If you insist on purchasing your Hutzler 571 Banana Slicer online, however, the drones, teamed up with electric delivery vans, makes this last step in the global journey of your $.63 hunk of plastic a little greener.

Whatever you do, though, don’t order drone dropped turkeys.