Hip hop was born in an apartment building in the Bronx, but it grew up in New York City’s parks. In the 1970s and ’80s, DJs would steal electricity from street lamps to power their speakers, plug in two turntables and a microphone, and throw a jam. Amateur rappers gathered for freestyle sessions in parks, most famously Manhattan’s Union Square.

The essence of living in a dense urban area is trading private space for public space. City-dwellers don’t have sprawling suburban lawns, or often even a backyard. But they do have access to great public and semi-public places: sidewalks, stoops, and, most importantly, parks. Parks are also where people without big houses, and people who are too young or too poor to gather in bars, go to party. And hip hop is party music, invented by DJs and MCs mixing records and making up rhymes to entertain the crowd.

So it’s natural that an intensely urban art form such as hip hop was nurtured in the parks. Hip hop is filled with nostalgia for the days of park jams, before the era of aggressive policing under the “broken windows” theory led to crackdowns on anything that might be construed as public disorder. But even after the heyday of park jams was past, parks continued to play a vital role in urban life and in hip hop music. From playing basketball to chess, rap lyrics celebrate the diverse uses of great public parks.

Here is my handpicked mixtape of great rap songs that celebrate the role of parks in city life.

Parks are especially important in the history of New York City rapper KRS-One, who helped to invent hardcore hip hop with his groundbreaking 1987 album, Criminal Minded, and then set off the era of social consciousness with his 1988 album, By All Means Necessary. When he was a homeless teenager, KRS-One slept in the city’s public parks. Luckily for him, the parks were, at the time, giving rise to the art form that would make him famous.

KRS-One’s rival was M.C. Shan. Their epic rap battles — with Shan representing the Queens-based Juice Crew and KRS representing Boogie Down Productions from the Bronx — were seminal in the music’s history, echoed a decade later in the deadly East Coast vs. West Coast rivalry between Notorious B.I.G. and Tupac Shakur. In this song, Shan tells the listener about the hip hop scene in the parks: “For this is the place which I made my mark/ And those who resist or try to dis get sparked/ In the park after dark things really got cookin/ I seen the titles of idols and many chains get tooken.”

The chorus of “In Tha Park” is an homage to MC Shan’s 1988 classic. But the song is far from merely derivative. It’s hip hop’s second generation — Ghostface Killah, member of the group Wu Tang Clan, and Black Thought, of The Roots — remembering how the badass young adults of Shan’s generation influenced them when they were children watching the grownups rap and party in the park at night. The great thing about parks, of course, is that unlike clubs, you do not need to be 21, or well-dressed, or even have money to get in. Black Thought rhymes, “A little man, hanging where them grown women is/ Under thirteen, seeing real strong images/ And that’s the reason for my real rap penmanship.”

In 1993, Ice Cube dropped his epic album, The Predator. Recorded in the wake of the L.A. riots, it is filled with Ice Cube’s trademark anger at police and the white establishment, but with far more wit than on earlier tracks like N.W.A’s “Fuck tha Police.” Ironically, though, it was this relatively light, smooth, relaxing single off the album that hit No. 1 on the Billboard chart and became the biggest hit of Ice Cube’s storied career. In it, Ice Cube goes through a perfect day. Most of the pleasures therein cannot be described in a family publication, but one of them is a game of pick-up basketball with friends in a public park.

The Infamous, Mobb Deep’s second album, is one of the classics of East Coast hardcore hip hop. The duo, who grew up in the Queensbridge public housing project, received rave reviews for the album, including 4.5 out of 5 mics from The Source, later upgraded to a perfect 5, for their rugged, spare beats, and even ruggeder, evocative lyrics. “Give up the Goods” is one of the best tracks, an amalgam of tales of street hustling, armed robberies, and gunfights. But interspersed throughout is the vision of what these gangsters are chasing: the good life. It’s a simple vision, of — this being 1995 — a Lexus, a cellphone, and a bottle of liquor to drink out on the park bench.

The Wu-Tang Clan’s lyrics are dense with references to their obscure fixations such as kung-fu films and chess. Most Wu-Tang members hail from Staten Island, the New York City borough with the highest concentration of parkland. In New York City, chess is often played at stone tables in public parks. This song is from Wu-Tang’s third album, The W, and is an alternate version of their first single, from their first album, Enter the Wu-Tang: 36 Chambers.

7. “Back in Philly we be out in the park/ A place called the plateau is where everybody goes/ Guys out hunting and girls doing likewise/ Honking at the honey in front of you with the light eyes”
— “Summertime” by DJ Jazzy Jeff & The Fresh Prince (1992)

The joys of carefree summer are the theme of this early ’90s classic. It epitomizes the radio-friendly and relatively innocent lyrics Will Smith cultivated. In some ways, it’s a clean counterpoint to “It Was a Good Day.” And, like any good Philadelphian, Smith largely spends his summers in the parks and playgrounds. Smith raps: “Yeah I got on sneaks but I need a new pair/ ’Cause basketball courts in the summer got girls there.”

8. “Rollin through the park tryin’ to make another hit”
–“Playground” by Another Bad Creation (1991)

In a lot of urban neighborhoods, playgrounds are central to the lives of preteens. They fulfill the social roles that, in the suburbs, are performed by summer camps, shopping malls, and after-school programs. In 1991, in a sort of Nickelodeon-meets-rap experiment, famed R&B producer Michael Bivins orchestrated an album by a group of kids from Atlanta called Another Bad Creation. The lead hit single, “Playground,” celebrated the social life of an inner-city 10-year-old who always hangs out at the playground. You may laugh, but the song was a top 10 hit.

Parks are not always just a respite from urban grit. Sometimes, especially at night, they can be criminal hot spots, and scary. Harlem-raised rapper Big L reminded listeners of that on his album, Lifestylez ov da Poor & Dangerous, rapping in the confessional tone of a jaded criminal: “Buckwild and foul is the lifestyle that I choose to live … Like a ninja, dressed in black with a ski mask/ I take all the funds, then I run down the street fast.” The park on his block was no place to be caught alone at night unless, like him, you were rolling strapped. Big L was murdered in 1999.

10. “See I was resting at the park minding my own/ business, as I kick up the treble tone.”
–“People Everyday” by Arrested Development (1992)

Parks can also quickly turn from places of relaxation to confrontation. Arrested Development’s hit debut album, 3 Years, 5 Months & 2 Days in the Life Of …, was the epitome of the era’s strain of progressive, intellectual, Afro-centric rap. “People Everyday,” one of the biggest singles from the album, with samples from Sly and the Family Stone’s classic “Everyday People,” is set entirely in a park. The song tells a story of, “My day was going great and my soul was at ease/ Until a group of brothers started bugging out … drinking the 40 ounce/ Disrespecting my black queen/ holding their crotches and being obscene.” The song ends with a fight broken up by the police. But it’s also a plea for comity and mutual respect.

Not all rappers are poets, but Nas, with his deft, multi-layered use of metaphor and allusion, is undoubtedly a poet — and at his best he is a great one. Nas’s best album by far is his 1994 debut, Illmatic, where, on several tracks, he evokes the already-past heyday of parks in hip hop. On “Halftime,” he says, “Back in ’83 I was an MC sparkin’/ But I was too scared to grab the mics in the parks.” On “Memory Lane,” Nas pays homage to the street hustlers who shaped his world and his craft in the streets and parks of his native Queens: “I drop the ancient manifested hip-hop, straight off the block/ I reminisce on park jams, my man was shot for his sheep coat/ Chocolate blunts make me see him drop in my weed smoke.”

In this song off his sophomore album, Resurrection, Common tells the story of hip hop by way of metaphor. Hip hop is an Afro-centric, creative, socially conscious woman he fell in love with, only to see her sell out for money and adopt a fake hardcore attitude. When hip hop first emerged, Common remembers, it was something people just did for love, for free, in the parks. “Now I see her in commercials, she’s universal/ She used to only swing it with the inner-city circle,” Common rhymes. But the song ends on a hopeful note, that Common intends to “take her back.”

Greg Nice is one half of the feel-good, old school rap duo Nice & Smooth. On this 1995 solo track, he nods to the spots where the hip hop scene of the 1980s thrived — Union Square Park and the Uptown club LQ — that became synonymous with the era itself. By 1995, Union Square was on its way to being surrounded with upscale restaurants and chain stores. But, as E.B. White explained, the essence of an emotional connection to an urban place is that what no longer exists can be more real to you than what is currently there.

Welcome to the urban jungle: Nature in cities is Grist’s July theme

This month, look at how nature gets into our cities and under our skin, even where we least expect it.

In a down-and-out corner of Washington, D.C., kids cleaned up a local park. The adults followed, and now it’s a national example of urban renewal done right. 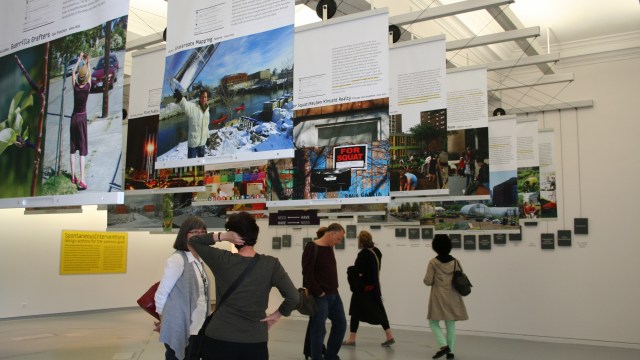 Remember when DIY urbanism was frowned upon if not outright illegal? According to a new exhibition, guerrilla tactics have become symbols of American ingenuity and the rebirth of urban cool.
See all articles in this series