America's cities are still too afraid to make driving unappealing 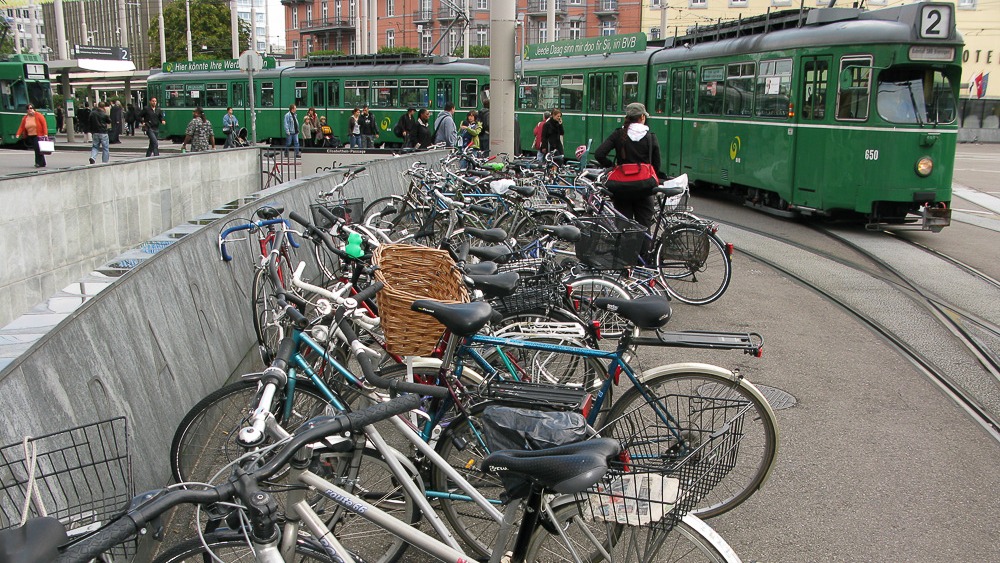 America’s cities are still too afraid to make driving unappealing

The morning I wrote this I took public transportation to work. I hopped on the bus around the corner from my house, then the train for a few stops farther. I took mass transit because it was convenient, because my card was already preloaded with the cash that diverts from my paycheck, and because the ride gave me 20 minutes to start the day browsing Twitter.

Baked into this decision, however, were a number of other nearly subliminal calculations about the alternatives not taken. I did not drive the car (yes, my household has a car) because downtown Washington, D.C., is a hot mess at rush hour, and because parking near the office costs the equivalent of a fancy hamburger a day. I did not bike because it was snowing. (Again.) And I did not walk because the distance was too far.

My commuting choices — just like everyone’s — are the sum of the advantages of one transportation mode weighed against the downsides of all other options. Or, more succinctly: My feelings about the bus are mediated by what I’m thinking about my car.

At a macro level, this decision-process implies that there are two ways to shift more commuters out of single-occupancy vehicles and into other modes of transportation, whether that’s biking, carpooling, walking, or transit. We can incentivize transit by making all of those other options more attractive. Or we can disincentivize driving by making it less so. What’s become increasingly apparent in the United States is that we’ll only get so far playing to the first strategy without incorporating the second.

“One of the things I keep looking at is cities like Boulder, Davis [California], and Portland –places well-known for walking and biking,” says Daniel Piatkowski, a recent graduate of the design and planning doctoral program at the University of Colorado at Denver. I met him earlier this year at the Transportation Research Board annual conference, where he was presenting on what he’s simply come to describe as the “carrots” and “sticks” that might be deployed to get people out of their cars.

“We’re still not seeing any really significant mode shifts, despite decades of investment,” he says, still talking about the cycling capitals of Portland and Boulder. “The crucial component that’s missing is that we’re not implementing any policies that disincentivize driving.”

We can quibble over how to define “really significant” mode shifts. In Portland, the share of commuters who get to work by bike is about 6 percent, well above the national average (roughly half a percent). But Piatkowski’s latter point is unquestionably true: Relative to European cities, it is exceptionally hard in U.S. communities to implement real disincentives to driving.

There are ways to do it. We could reduce parking availability or raise parking rates. We could implement congestion pricing. We could roll back subsidies for gas and highways and public parking garages. We could tie auto-insurance rates or infrastructure taxes to how much people actually drive. All of these “sticks,” to use Piatkowski’s term, would have a real impact on how people chose to get around. And that impact would no doubt be larger than what we get from building new bike lanes, sidewalks, or bus stops.

But these are the options we almost never choose. For his research, Piatkowski looked at four cities that won grants each worth $25 million to increase biking and walking as part of a federal Nonmotorized Transportation Pilot Program. Unanimously, those cities spent almost all of their money on “carrots.” Piatkowski couldn’t even find much literature on the impact of driving disincentives in the United States because so few are implemented.

“On a scale of getting to a place that is like Zurich or Freiberg, one of these really epic walkable, transit-friendly, bikeable places,” he says. “We’re just so far away from that.”

Piatkowski and his research collaborator, Wesley Marshall, aren’t arguing that cities shouldn’t deploy carrots like striping bike lanes or improving bus service or paving shaded sidewalks for pedestrians. After all, driving disincentives won’t be all that effective if commuters don’t have viable alternatives. More likely, these would just harm low-income commuters by increasing the burdens of driving without decreasing the burdens of alternative transportation.

The question is really how far we can get down the path of least resistance, pursuing only the politically easy tactics. If the goal at the end of the day is changing behavior, how much can you really achieve by showing people a nice new bike lane?

“It’s going to be marginal,” says Marshall, an assistant professor in the College of Engineering and Applied Science at UC-Denver. “You can’t expect to put in a bike lane and for it to be a magical elixir in most of the country.”

That’s not always the case. Carrot-like improvements to transit in New York City have significantly changed behavior because disincentives to drive are already built into the environment. New York is expensive and crowded, which means that parking is costly and congestion is bad. But elsewhere — in cities where driving is systematically subsidized in so many ways — the disincentives would have to come from more explicit policy.

In the absence of such policies, Arlington County, Va., offers a good case study for the upper bounds of what’s possible with incentives alone. The county’s commuter services office runs one of the most advanced travel demand management programs in the country, just across the Potomac from Washington, D.C.

“The stuff we focus on is much more mundane, ground-level tactics,” says Chris Hamilton, chief of the county’s Commuter Services Bureau. “The Bike Arlington guys  are just trying to help so many adults over the hump of riding a bike for the first time again.”

The county runs commuter stores and bike clinics. It teaches people how to swipe transit cards and find the bus. It works with building managers to coax them into putting bike lockers in the basement, and transit screens in the lobby. It prods local employers to subsidize transit cards and bikeshare memberships.

Through all of this work, Hamilton’s office calculates that 42,000 trips a day in the county that would otherwise take place in a single-occupancy vehicle now occur in other modes instead. Three-quarters of those trips are taken by mass transit. All of that has come through lowering the barriers or increasing the appeal of alternative transportation.

That’s an impressive number. But when asked if he wouldn’t rather the county just tax the heck out of parking, Hamilton laughs. He knows that would make his job much easier. “We wouldn’t have to do any of this,” he says.

A creative city might be able to make a disincentive feel like an incentive. Piatkowski points to a “parking cash-out” law in California that requires employers to give workers a cash allowance to not use parking.

“The stick then becomes missing out on the reward,” Piatkowski says.

But why not just wield disincentives as what they honestly are? “Behavior change” sounds vaguely manipulative (whether we’re talking about behavior involving automobiles or thermostats). But in this context, the disincentives are really about removing subsidies and distortions from the market. Parking isn’t really free. Gas taxes don’t actually cover the costs of maintaining our roads. So why is it so hard to disincentivize driving at the same time that we incentivize the alternatives, at least until they’re in some better kind of equilibrium?

“Because we’re afraid,” Hamilton says. “Because we don’t have the guts to pull the levers on what we want. We know that we want a walkable, bikeable, transit community. We’re building it. But we’re afraid to push the disincentive lever too hard.”

This article is part of ‘The Future of Transportation,’ an Atlantic Cities series made possible with support from The Rockefeller Foundation.