EPA chief Gina McCarthy pulls off a miracle in Newark 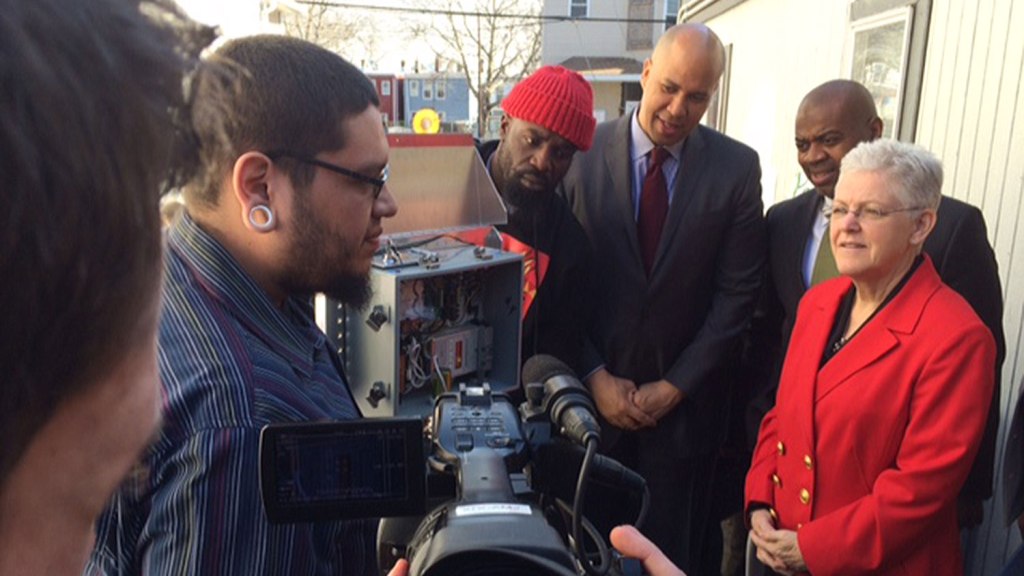 EPA chief Gina McCarthy pulls off a miracle in Newark

Hillary Rodham Clinton is not going to be the first woman president. Environmental Protection Agency Chief Administrator Gina McCarthy will be. You know how I know? She just pulled off the impossible. This morning she came out in Newark with the city Mayor Ras J. Baraka and its former mayor, U.S. Senator Cory Booker, to introduce a “first-of-its-kind community air monitor” as part of an effort to help communities build expertise around collecting environmental pollution data.

The impossible is not the air monitor project — communities have been finding DIY ways to monitor air  for years (because the EPA’s has been random, and lacking). Just Google “bucket brigade.” The impossible is that SHE BROUGHT CORY BOOKER AND RAS BARAKA TOGETHER.

If you don’t understand the significance of this, let me help you. Booker and Baraka have been the bitterest of foes. When Booker was mayor, his much ballyhooed wooing of Silicon Valley and Wall St. billionaires to help reform Newark schools incurred the wrath of then-city council member Baraka and many of Newark’s black parents whose children have come out no more advanced because of it. (You can read more about this in detail in Dale Russakoff’s profile of the situation in The New Yorker last year.)

The Booker-Baraka beef runs deeper than that, though. Baraka — son of the late, great, Beat Generation/Black Arts Movement poet laureate Amiri Baraka — has long been recognized among Newark residents as the people’s champ. The Ivy-bred, Wall Street Generation/Capitalist Arts Movement politician laureate Booker had to scrap through a bunch of streetfights to achieve the people’s trust when he was mayor, and even today as a U.S. Senator.

So the two of them appearing together for a press conference this morning is kinda like the moment when rappers Nas and Jay-Z came out on stage in solidarity after years of superugly feuding. And the Booker-Baraka bonanza is a good thing, because the problems in Newark are much bigger than their rivalry. They met today at the Ironbound Community Corporation to introduce the new community air monitoring project, much needed given roughly a quarter of the children there suffer from asthma, which is the leading cause of absenteeism for Newark students — a school-to-hospital-pipeline problem this heavily troubled city doesn’t need.

“The Ironbound neighborhood is a perfect example of the negative environmental and health impacts of industrial pollution,” said said Isella Ramirez, environmental justice manager for the Ironbound Community Corporation, said in a statement. “Citizen science projects that connect local residents to air quality data helps to ignite the community to advocate for health-protective policies at the local, state, and federal levels.”

They’re gonna need it. This is New Jerz, the state where Gov. Chris Christie said earlier this week that he has spent most of his tenure dismantling the environmental protections that former U.S. EPA Chief Lisa Jackson put in place back when she was New Jersey’s environmental chief. This is also the same Gov. Christie who just sold out his citizens by arranging a $250 million settlement with Exxon-Mobil after state courts were prepared to hit the company with a $9 billion fine for polluting thousands of acres of the state’s wetlands. Here’s Jon Stewart with the wisdom:

So if the state ain’t gonna regulate, then you might as well give the power to the people, which is what the EPA is trying to do through this Citizen Science Air Monitors program. From the press release:

The four air monitors … designed by EPA’s Office of Research and Development … include sensors for measuring nitrogen dioxide concentrations, temperature, and humidity, in real-time and a sensor for measuring fine particulates that are 1/30th the diameter of a human hair. The Citizen Science Air Monitors can collect data for 7 days on a single battery charge. The monitors are being moved to different locations so that they can collect data from multiple locations.

This is truly wonderful news for the Newark community, and I hope the hard-working-class residents have the time and capacity to actually employ the new technology.

But let’s get back to this Baraka-Booker combo, which is basically like the legendary New Jersey rap group The Fugees coming back together. I have so many questions (An EPA official told me that getting the two together “took some doing”): How did Chief McCarthy arrange this? First she meets with The Pope and now this? What’s next? She takes over Empire Records from Lucious Lyon? She brokers a permanent peace agreement between Israel and Palestine? She converts ISIS into a PeaceCorps unit?

Hillary better watch her back.