Here's why narrower streets are safer 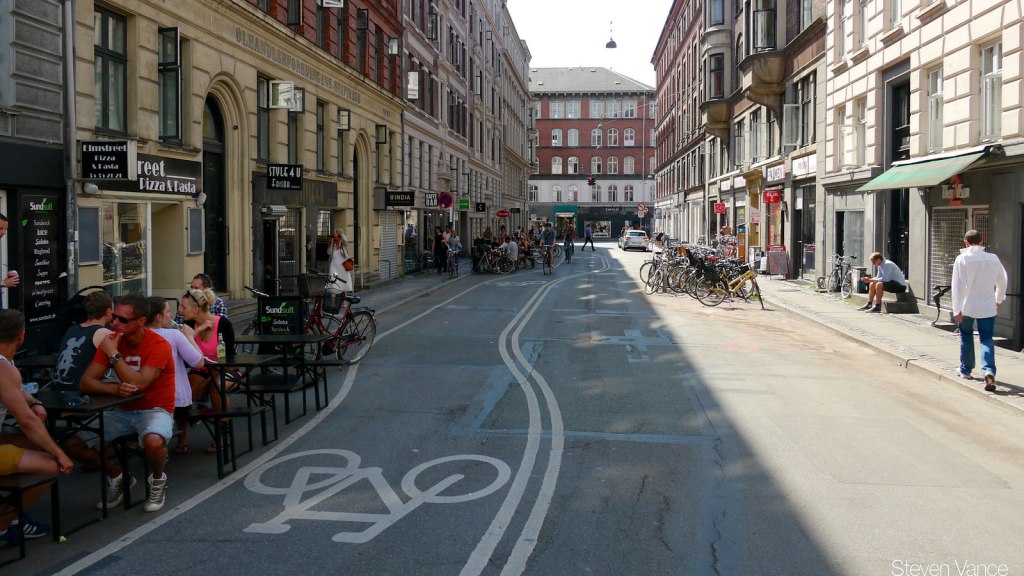 Here’s why narrower streets are safer

If you could change one thing about your city, to make it a safer and more pleasant place, what would you pick?

My first answer was solar-powered hover-buses, but it turns out that the real deal is much simpler than that. The one single thing we could actually do to limit traffic fatalities and make cities more bike- and pedestrian-friendly is *drumroll* …. restrict the lanes on our busiest streets to 10 feet wide.

I know, it’s way less cool than a diesel-free levitating commute, but on the other hand, it would actually work.

City planner Jeff Speck, also known (by me, as of this moment) as the wizard of walkability, summed it up quite pithily for CityLab:

When lanes are built too wide, many bad things happen. In a sentence: pedestrians are forced to walk further across streets on which cars are moving too fast and bikes don’t fit.

Right now, the busiest roads in cities feature lanes between 10 and 12 feet wide. But 12 feet is just absurdly wide, Speck points out. The standard in cities used to be 10 feet; it’s only recently they’ve been expanded, under an assumption that wider lanes will put cars farther away from the things and people they might hit.

But that premise ignores the fact that drivers will change their behavior in different environments. Think about it: When you’re driving down a wide, straight road with a generous buffer on all sides, you are more likely to nudge past the speed limit. Whereas a narrow road, hemmed with trees, separated bike lanes, and other traffic-calming features, might be more likely to make you slow down and keep a sharper lookout for fellow bipeds.

So far, so logical. And there are reams of studies to back up this assumption, including one authored by Rutgers professor Robert Noland, who determined that wider lanes were responsible for approximately 900 extra traffic fatalities each year.

And not only do narrower lanes lead to fewer accidents — they also mean the accidents that do occur are much less likely to be fatal. Speck again:

According to a broad collection of studies, a pedestrian hit by a car traveling 30 m.p.h. at the time of impact is between seven and nine times as likely to be killed as one hit by a car traveling 20 m.p.h. This tremendously sharp upward fatality curve means that, at urban motoring speeds, every single mile per hour counts.

Meanwhile, a multi-lane street with lanes cut down from 12 feet to 10 feet leaves plenty left over for protected bike lanes. Sounds like a win-win to me.