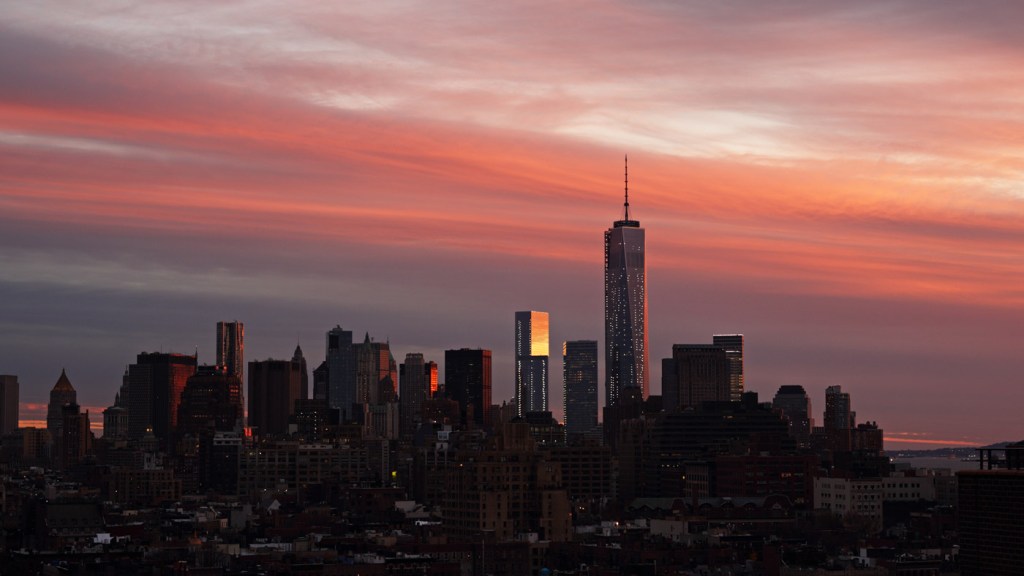 One World Trade Center, or the “Freedom Tower,” as it was formerly known, soars above New York City, finally filling a void left by the 9/11 terror attacks. The brilliant blue-silver facade glints no matter where you are in the city — nothing less than a “beacon of hope, just like the Statue of Liberty,” says the Port Authority of New York and New Jersey, which runs the site in a joint venture with real estate giant the Durst Organization.

The tower is now the tallest building in the Western Hemisphere. And it’s also supposed to be one of the greenest — a first on its scale to aim for the U.S. Green Building Council’s LEED gold certification, a coveted prize for sustainable building design. One World Trade Center features lighting that reacts to sunshine, rain harvesting, and a state-of-the-art onsite fuel cell installation, one of the largest of its kind in the world. In 2008, then-New York Gov. David A. Paterson praised this “space-age energy technology,” adding, “I can think of few sites in the country where the symbolism of this is more important.”

A 26-page trove of internal documents obtained by Climate Desk from the Port Authority reveals for the first time a substantial hit to the project’s green ambitions: Superstorm Sandy caused critical damage to the World Trade Center’s $10.6 million clean-power sources — those world-class fuel cells — a third of which went unrepaired and unreplaced, in part because of a costly flaw in the main tower’s design, and pressure to honor a billion-dollar deal with Condé Nast, the global publishing powerhouse and high-profile anchor tenant.

What happened in the basement of One World Trade Center after Sandy is a previously untold — and as yet unresolved — chapter in the site’s redevelopment, already dogged by false starts, political squabbling, and cost overruns, involving some of the biggest names in New York City’s world of corporate real estate.

In 2007, the Lower Manhattan Development Corporation, a state agency created in the aftermath of 9/11 to coordinate rebuilding efforts, introduced aggressive green standards for the Freedom Tower and its surrounding complex — “unprecedented in their scope and depth,” according to the building’s architects. The World Trade Center towers would be required to attain LEED gold certification, achieve net zero CO2 emissions (by purchasing green-energy credits), and operate with at least 20 percent more energy efficiency than the state’s current building code. “Every day is Earth Day at the World Trade Center,” claimed the Port Authority.

Another key requirement in the agreement was a fleet of fuel cells, which work by converting natural gas into electricity using an energy-efficient electrochemical process, rather than by burning it. They’re also cleaner because they don’t emit greenhouse gases or soot on location; the heat and water they generate as a byproduct can be used for cooling and heating the tower.

And so, in 2008, the Port Authority helped orchestrate a $10.6 million dollar deal with Connecticut’s UTC Power to provide nine fuel cells to supply power to three main towers at the site, including One World Trade. In Tower One, the fuel cells would provide up to 10 percent of the building’s electricity source, according to the fuel cell manufacturer; in towers Three and Four, they would supply a combined 30 percent.

Then, three years later, Sandy hit. Some 200 million gallons of water cascaded into the lower levels of the site, flooding the National September 11 Memorial Museum with at least five feet of water, according to the New York Times. What no media outlets reported, though, was that the flood also destroyed all nine fuel cells.

And while towers Three and Four now have new fuel cells, the main tower’s have never been replaced. The building opened without them — despite the fact that they were required in the original agreement.

So why didn’t the Port Authority replace the fuel cells? Evidence suggests that the reason had to do with financial pressure.

In May 2011, the publishing giant Condé Nast signed a $2 billion deal to become the tower’s anchor tenant. Built into the terms of the lease was a move-in deadline: The Port Authority would be liable for penalties or lost earnings if Condé Nast was forced to wait beyond Jan. 1, 2014, to begin the process of moving in. (Climate Desk contacted Condé Nast, but the company did not respond on the record.)

But the fuel cell disaster created the real possibility that the Port Authority and Durst were not going to make that deadline, a potential financial disaster. Part of the problem was a well-documented mistake in the building’s design: A temporary underground structure serving an existing train station was preventing builders from finishing the tower’s giant underground loading dock — the central piece of infrastructure used to haul masses of equipment up into the tower. Without the loading dock, there was no way for tenants to start moving their equipment into the building. And once a new loading dock went in — budgeted to cost $18.4 million — it would be all but impossible to remove and replace the dead fuel cells. Nevertheless, with the tight deadline, Port Authority decided to build the new loading dock. That meant the fuel cells had to come out fast — and finally, after several months, they did.

Today, more than two years after Sandy, the new loading dock still blocks access to the one window through which the fuel cells could possibly be replaced. Durst admits in a statement to Climate Desk that “in order to replace the fuel cells that were destroyed by Super Storm Sandy, One World Trade Center’s interim loading dock needs to be disassembled,” but did not say if or when that might occur.

With no new fuel cells, the Port Authority needed to figure out how the main tower was going to reach the 20 percent energy efficiency goal stipulated in the rules. According to Durst, the building has now met the goal, but the company did not detail exactly how the building now makes up energy savings, except to say it “has been achieved through a number of means,” including the use of LED lighting. Focusing on the fuel cells is “missing the forest” for the trees, said Jordan Barowitz, a spokesperson for Durst.

But that leaves a key part of the green deal in limbo: The rule that states that fuel cells must be built “into the towers.” Durst did not deny that the building was currently in a state of noncompliance with the original 2007 agreement. Neither the Port Authority nor Durst would confirm which organization in the joint venture is ultimately responsible for replacing the fuel cells. The Port Authority declined to be interviewed or to answer a series of questions for this story, instead referring us to Durst.

Richard Hankin, the director of 16 Acres, a documentary that charts the deeply convoluted progress at the site, says this confusion over who’s in charge of final sign off is typical of the site in general. “Over the years, the sheer size and complexity of the bureaucracy has often made it impossible to figure out who’s responsible for any given area or ultimate oversight,” he said.

Hankin found that complications at the World Trade Center stemmed from the tremendous number of invested parties — developers, architects, insurance companies, and victims’ groups — combined with the high turnover in top positions at the agencies responsible. “It’s that classic situation: The right arm is unaware of what the left arm is doing, compounded by the fact that it’s often a new left arm,” he said.

In addition to potentially flouting the original agreement, it remains unclear whether or not the fuel cell fiasco will undermine the tower’s LEED certification efforts. The U.S. Green Building Council listed the gold certification as “projected” as recently as May 2014 in its magazine. But, says Marisa Long, the communications director at the U.S. Green Building Council, “if the calculations for the LEED certification included a component like fuel cells, and damage to that component forces a change in calculations, the number of points earned to achieve LEED will be based on the new calculations.” Those calculations appear to be based on the original 2007 deal, which contains a variety of standards, not simply those concerning energy efficiency. Durst says it will still meet LEED gold certification.

Despite the setback for the building, those involved continue to publicly laud the project’s green cred. Patrick Foye, executive director of the Port Authority, opened the building earlier this month by saying the building “sets new standards of design, construction, prestige, and sustainability.” Kenneth A. Lewis, of Skidmore, Owings & Merrill, told the USGBC magazine: “We want to open it up and have the LEED plaque on the door.”

While there’s still time to get the building across the line, Lewis’ hope for a grand LEED-certified opening has vanished. For now, the doors are wide open, without the plaque, and without a clear solution to the alternative energy demands of the tower.

“If one thing is delayed or goes wrong, it very much has a domino effect with all the other parts,” Hankin said. “It can result in a lot of finger-pointing.”