Richard F. Hall will land in the history books, if he makes it at all, alongside dreamers and hucksters who sold swampland in Florida and on parched mesa tops in New Mexico. Hall was the developer who tried to build a beach town on Cedar Island, a patch of wind- and wave-tossed sand off the Virginia coast.

Here’s Tom Horton, writing in The Baltimore Sun in 1998:

Once, Cedar was touted as the mid-Atlantic’s next premier beach resort. “Ocean City, Virginia,” it was dubbed in a glowing, 1950s sales brochure published by developer Richard F. Hall.

He envisioned a bridge to the island from the Accomack County mainland and a highway running the length of Cedar. Without either one, Hall sold some 2,000 lots …

The bridge and the highway never materialized. Still, Hall’s granddaughter, Elizabeth, and her developer husband, sold more land on the island in the 1980s, even as the houses that people built there washed, one by one, into the sea.

Those who had the means moved their vacation homes away from the advancing surf. A few of them hung on for decades. But now comes the news that the sea has swallowed the last house standing on Cedar Island.

From Rona Kobell at the Bay Journal:

The pretty red fishing cabin has joined the remnants of dozens of other homes — some with grand pianos — in the waves of the Atlantic Ocean. But the owners of the last house wanted to be responsible, so they burned the cabin when they knew the end was near. [They] did not want their septic tanks, their drywall, to pollute the ocean. Their care is remarkable only because so many failed to do even the minimum to protect the natural environment that drew them there, and then did what it was always going to do: it turned on them. 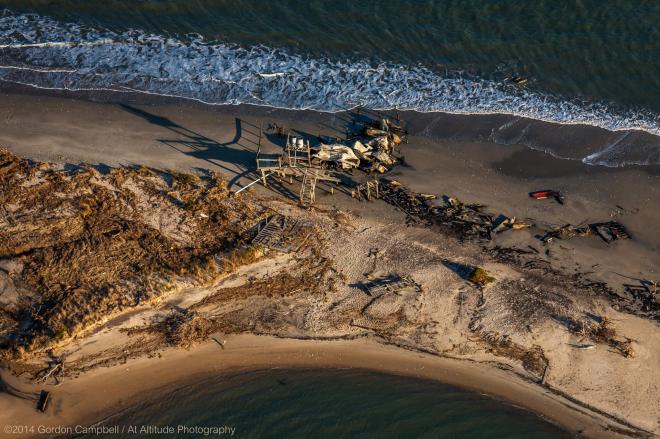 Scientists warned that building on Cedar was like trying to sink a foundation into a cloud. Driven by storms, wind, and waves, the island shifted hundreds of feet in some years. As Horton explained in that Sun story, there is simply not enough sand in the surrounding water for the waves to rebuild Cedar Island when storms wash it away. State regulators knew this, but allowed the development anyway.

And people bought it, some of them fully aware that the clock was ticking on the place. As one of the last residents told Horton, even if his place were to wash into the ocean the following week (and it very well may have), “it was worth it to be out here.”

That comment brought to mind a conversation I had with a bookstore clerk in Miami Beach last spring. That community, also built on a barrier island, has spent millions to replenish its eroding beaches — all in an effort to avoid, or at least delay, the same fate as Cedar Island and others before it.

The clerk asked me how much time the community had before the waters that are already lapping at its doorsteps swamp it completely. I told him that scientists believe that the seas will rise three feet or more by the end of the century.

“Well, that’s a couple more mortgage cycles, at least,” he said, optimistically. “As long as there’s money to be made, I don’t think people here are going anywhere.”

Updates on things I’m obsessed with