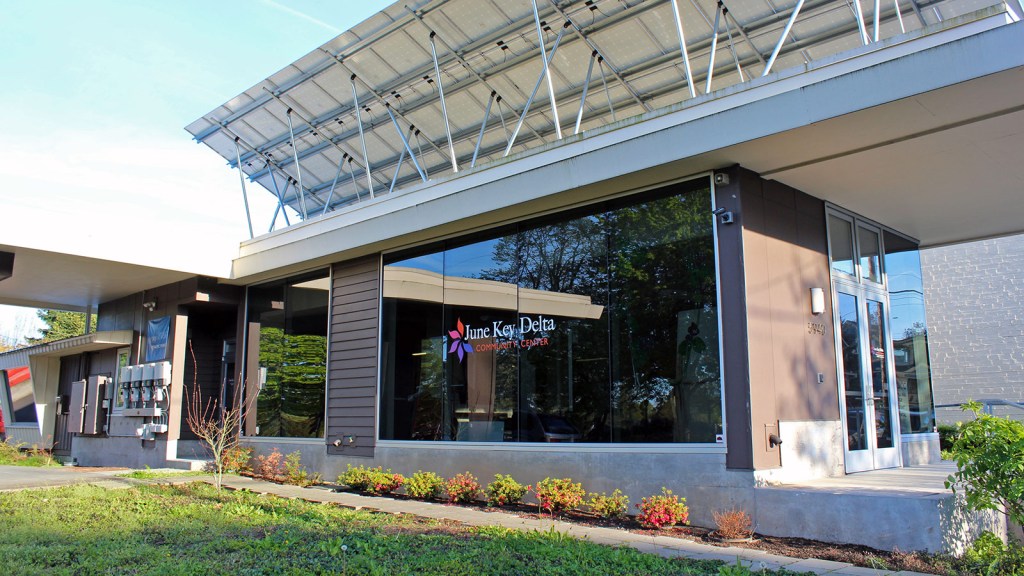 When the Portland Alumnae chapter of the Delta Sigma Theta sorority purchased a long-abandoned gas station in east Portland in 1992, the idea was to use it as a meeting place. But it was a little dirty.

Correction: “It was nasty!” insists Aletha Chavis, a retired educator and Delta since 1951. “It was just awful — dirty and cobwebby and really grimy.”

Chavis didn’t know, then, that this grimy, dilapidated brownfield site would have a remarkable future as one of the greenest buildings in Portland.

At the time, Chavis had simply accompanied Delta founder June Runnells Key to a few potential properties, including an old theater full of pigeon droppings. When they visited the former Arco gas station, shuttered for decades and plastered in graffiti, “June came in and she said this was ‘workable,’” Chavis recalls. “I don’t know how she could have said that. Ugh, when you saw this place! It was scary! It was dark and dismal and dusty and piled with junk. It had a flat roof, so we had lots of leaks. And no electricity.”

It’s a warm spring day at the June Key Delta Community Center, and sunlight pours in the repurposed windows, glinting off the recycled-rubber floors and donated armoire full of environmental awards. A handful of Deltas have come by to give me a tour of the building and reminisce. “Remember the office, Francetta, where the little mice were?” Chavis says, turning to her sorority sister, Francetta Cross, and laughing, but making it quite clear that she hadn’t been amused at the time. “Remember the little mice?!”

It was only after the valiant cleanup efforts of a whole bunch of Deltas, as well as their husbands and friends, that the place got into “some kind of walk-in order,” says Chavis, “so that at least you could come in and not have something fall on your head.”

Today, the building’s original incarnation is hard to picture. From a graffiti-smeared gas station, the center has turned into a shimmering eco-paradise, well on its way to meeting the Living Building Challenge — a certification process developed by the Cascadia Chapter of the U.S. Green Building Council in 2006. “Living Buildings” are designed to be even greener than anything certified by LEED, in large part because the challenge incorporates not only the structure of the building, but the way people interact with it. The June Key Delta Community Center — with its solar panels and sustainably-logged wooden cabinets and native-plant landscaping and community outreach, among many other things — is a good chunk of the way there.

And that’s all thanks to several dozen tireless Deltas, over several dozen painstaking years. “We’re glad to get it to this point,” says Francetta Cross, matter-of-factly. “But we’re not done yet.”

The Delta Sigma Theta sorority was formed in 1913 at Howard University in Washington, D.C., by 22 African-American women. Now, it has 200,000 members and 900 chapters across the world (and you don’t have to be a Howard University alum to join). From the beginning, the sorority emphasized community engagement and public service. Its Portland chapter was founded in 1945, and in those days, in what was and remains one of the whitest cities in America, members weren’t welcome to hold meetings in downtown hotels. They’d usually meet at each other’s homes, and, eventually, through some personal connections, at the historic Portland hotel now owned by Hilton’s Embassy Suites. But after years of making do, June Runnells Key — a compelling firecracker of a woman, say the Deltas — was determined to change that. The chapter had some donated seed money, and by the late 1980s, she was hunting for a place to spend it.

But buying property and sprucing it up for meetings was one thing; turning it into a green building and thriving community center was quite another. In fact, the Deltas didn’t buy the building with an explicitly green transformation in mind; one dedicated Delta, the late Chris Poole-Jones, drove that idea.

A former librarian and beloved community leader who passed away in April 2014, Poole-Jones championed the building’s sustainable features. Once she started getting grants for the build (fact: it’s easier to get funding for an effort like this if you go green, especially in a place like Portland), she brought the other Deltas along with her. Now, the members who’ve been involved with the project have stopped using Styrofoam, started getting energy audits on their homes, and embraced the eco-friendly ethos of Portland.

“Chris did all the dirty work to make it happen,” says Irene Schwoeffermann, a Delta who was enrolled in a sustainability certificate program at Portland State University in 2011 when she began working closely with Poole-Jones on coordinating the building’s eco-friendly features. “She wasn’t a grant writer, but learned how to write grants. She wasn’t up on technology, but was always going to trainings to make sure she had the tools she needed to move the project forward. She was always encouraging more people to get involved,” Schwoeffermann adds with a laugh, “always, always, always. Just so we could keep the doors of the building open and keep construction moving.”

Poole-Jones helped secure numerous grants and awards for the center over the years, including an EPA Green Power Award and two Oregon Brownfields Awards, annual prizes the Northwest Environmental Business Council presents to projects and individuals that transform contaminated sites into something beautiful.

“I don’t think she ever sat still,” says Patricia Dickerson, one of the head coordinators on the project. “And she always had a plan. It was never, ‘Oh, we can’t do that.’ It was: ‘We will do that.’”

But it takes a village, of course — all this dedicated community service, all this fundraising, all this volunteering. “We like to think that that’s just part of [the Deltas’] culture,” says Irene Schwoeffermann. Although the idea of pushing the development from livable space to Living Building wasn’t there from the very start, “Along the way, we said, ‘Portland’s doing this green thing; let’s try it.’” Instead of local government trying to get people involved in green initiatives, she says, “This was the reverse: this was saying, hey, we see it happening around us, and we’ve not been tapped to be involved in that. So how about let’s do it ourselves?”

In the early 2000s, the Deltas enlisted University of Oregon architecture professor Greg Acker and his graduate students to offer green construction expertise, and in 2003, they presented five potential designs. Architect Mark Nye then put together a final design that incorporated the elements the Deltas already had on hand — shipping containers, salvaged glass, donated wood. Construction began in earnest in 2007, and the building’s grand opening took place in summer 2011.

The work does, of course, continue — as does the fundraising. While the overall budget has been impressively small, the project has relied on small donations and grants from a slew of individuals, government entities, and foundations over the years, including the city of Portland, the EPA, and the Black United Fund.

Today, as I’m led around the building, the list of green features is dizzying. The floor of the building’s main room is made of recycled tires. The large windows were rescued from Seattle’s landfill. Several bathrooms and an extension to the kitchen were built from old steel shipping containers. The paint on the walls came from a regional paint recycling program. Permeable pavers in the parking lot filter storm water. The bathrooms and kitchen have low-flow sinks and toilets. The community garden is growing half a dozen kinds of vegetables. The 62 solar panels power the entire facility, and an onsite rain collection and treatment system will, when completed, turn storm water into drinking water.

Many Deltas believe the project has invigorated their ranks and elevated their presence in the community. Many local groups have gotten involved along the way — particularly groups promoting diversity in the environmental movement. Verde, a green jobs training program for low-income people of color, did the center’s landscaping; Constructing Hope, a construction apprenticeship program for low-income community members, built the shed; Oregon Tradeswomen did its electrical work; even the company that installed the solar panels, Synchro Solar, is 50 percent women-owned.

Today, the June Key Delta Community Center is no longer just a meeting place for the sorority, but for all Portlanders. It hosts education programs and community workshops and rents the space at cost to local residents for birthday parties, dinners, and receptions.

And because it’s a green building, Deltas themselves have become green role models, both inside the building and in their own lives. They went from using plastic dishware to compostable cups and plates, and from conventional cleaners to nontoxic ones. They got a grant from the city of Portland called reTHINK, designed to engage communities of color in climate work, and hosted workshops, trainings, and Earth Day events at the site; some Deltas even started getting energy audits in their own homes and solar panels for their own roofs. “We knew it was important,” says Irene Schwoeffermann, “especially for African-Americans to be engaging in the green culture of Portland. We wanted to be a part of helping our community do that. And it started with us, and it just kind of has multiplied.”

Francetta Cross finishes the building tour by showing me the art gallery, featuring local African-American artists, and pointing out the hand-drawn “Burn the Mortgage” sign on the wall — there’s still another $50,000 left on the mortgage — with its associated Buy-a-Brick fundraising campaign.

“That’s another plan,” Cross says, and then, in true Delta fashion, starts laughing. “We have lots of plans.”