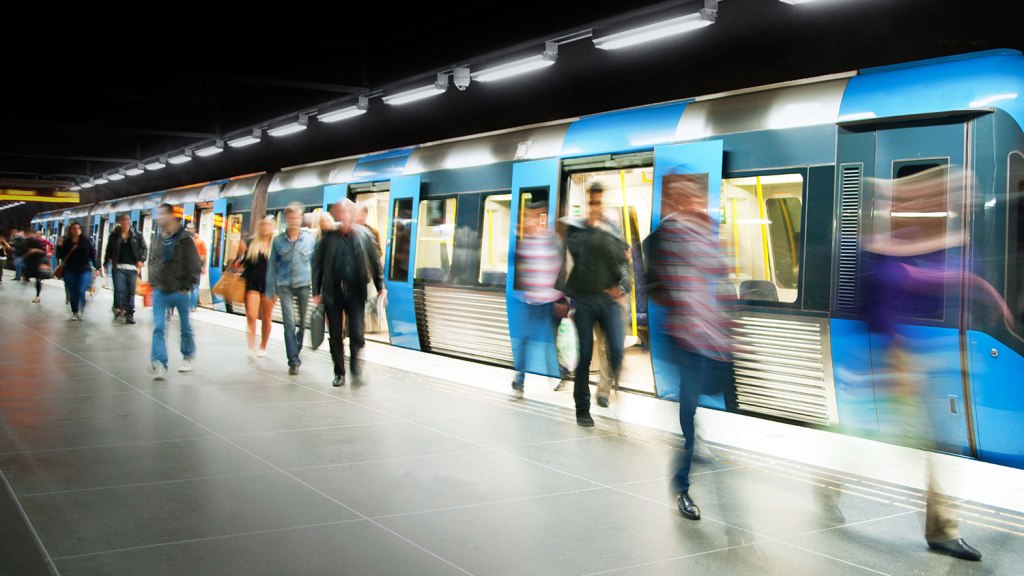 After decades of gradual dispersal to the suburbs, jobs are beginning to return to the center of cities — and that creates opportunities for expanding mass transit systems.

A new analysis of Census data from the think tank City Observatory finds: “Downtown employment centers of the nation’s largest metropolitan areas are recording faster job growth than areas located further from the city center.” City centers, defined as a three-mile radius around the central business district, averaged 0.5 percent job growth per year from 2007 to 2011, despite the massive recession of 2008-2009. During the same period, surrounding peripheral areas lost jobs at an annual rate of 0.1 percent.

This represents a major departure from the previous 60 years of American history. Jobs have been radiating outward from the urban core since the beginning of the post-War period that I like to call the Sprawl Era. Between 1947 and 1963, central cities lost jobs in every sector except services. Suburbs, meanwhile, rapidly gained jobs in everything from manufacturing to services to retail. By the 2002-2007 period, that trend had slowed: city centers experienced 0.1 percent net job growth per year, versus 1.2 percent for the periphery. (The periphery, since it includes outlying areas within cities, is not exactly the same as suburbs.)

The shift in job growth from outer areas to urban ones in the latter half of the last decade mirrors the recent shifts we’ve seen in population growth and in how people get around. Big city populations started growing around 2010. Vehicle miles traveled per capita dropped for the first time ever in 2005 and they have kept declining.

Concentrating jobs in central cities has many benefits. The city center tends to be closer to denser and poorer neighborhoods, so more urban jobs mean more economic opportunity for non-white and lower-income families, who are less likely to own cars. And shorter commutes not only have lower economic costs but lower social and environmental costs too.

Clustering jobs downtown is also necessary for the development of mass transit. To see why, look at maps of the world’s oldest major subway systems, such as the London Underground, the Paris Metro, or the Boston T. They all follow a common pattern, sometimes referred to as “hub and spoke.” Transit systems are most efficient when each line runs through the city center, allowing transfers between lines. This model arose at a time — the late 19th century — when commerce was mostly in a city’s central business district.

During the Sprawl Era, many factories and offices moved out to the hinterlands where land was cheaper and empty lots allowed for plenty of parking and more control over floor plans.

But here’s the problem with suburban workplaces: not all the workers live in the same town. Imagine that an insurance company with 1,000 employees relocates from a city center to the metro area’s northernmost suburb, where the CEO lives. It’s a fancy town, with zoning that requires large minimum lot sizes and astronomical property taxes to support its highly regarded public schools. Hardly anyone below the top management can afford to live in or near that town. Most of the lower-level employees live in more modest suburbs to the city’s east, west, and south. That means their commutes will now be much longer than they were when the office was in the middle of the region.

Meanwhile, the local toy parts manufacturer decides to leave for the suburbs as well. But it operates on a lower profit margin and it uses a lot more space. So it needs cheaper land than can be found in the fancy northern suburb. It goes to a cheaper suburb at the farthest southern edge of the region. But the toy company’s top managers live in desirable northern suburbs. Instead of moving to the unfashionable town where they now work, they drive really far every day — and most of the other employees do too.

So, whereas before you had large numbers of commuters going to and from the city center, now little clumps of people are all going in different directions and taking different routes around the periphery. This “lateral commuting” makes it impossible to construct rail systems that cover a large portion of regional commutes. Sometimes there aren’t even buses around these suburban areas, and getting to work without a car is outrageously difficult — as in the case of a Detroit man who recently came to national prominence for walking 21 miles every day as part of his eight-hour round-trip commute to his job in the suburbs. Even where buses exist, low demand means infrequent service, transfers between suburban bus lines are often inefficient or difficult, and traffic can make buses slow or unreliable. A 2012 Brookings Institution report found, “The typical job is accessible to only about 27 percent of its metropolitan workforce by transit in 90 minutes or less.”

This problem cannot be totally solved by throwing money into better transit systems. Having widely dispersed workplaces means you just can’t serve very many people with transit. As Brookings’ Adie Tomer writes, “The suburbanization of jobs obstructs transit’s ability to connect workers to opportunity and jobs to local labor pools.”

In the 47 metro regions in the City Observatory study, 15.8 percent of jobs are in city centers. New York and San Francisco — which rank first and second in the U.S., respectively, for mass transit usage — are among the metros with the highest proportion of jobs in the center city, with well over 20 percent each. Older industrial regions — even around smaller, notoriously desolate cities like Birmingham, Ala.; Hartford, Conn.; and Rochester, N.Y. — tend to have more downtown job concentration than newer metros like Miami, San Diego, or Las Vegas. At the very bottom, with less than 10 percent of jobs in the city center, are sprawling Sun Belt boomtowns such as Atlanta, Dallas, Houston, and Los Angeles. Although some of those cities have committed to expanding transit, their lateral commuting patterns make it difficult. And those same four cities have all defied the larger trend: even between 2007 and 2011, they had more job growth in the periphery than in the city center. The sprawling regions are getting sprawlier, while it is the denser, more transit-rich ones — Chicago, Philadelphia, San Francisco, New York — where job growth is returning to the urban core.

But the lack of central job concentration afflicts even cities with good transit systems. Consider Washington, D.C., where Metrorail follows the hub-and-spoke model. Owing to the city’s arbitrary building height restriction, downtown office space is in short supply, and commercial rents are among the highest in the nation, forcing many companies out to suburbs in Northern Virginia. Some of those suburban offices are simply inaccessible by Metro. But even those near a Metro station are still much less efficient for commuting. If you live in a peripheral neighborhood of D.C., or a Maryland suburb, you have to go downtown to transfer to a Metro line that can take you to Northern Virginia. That means making a commute that is shaped like an L instead of a straight shot. When I lived in D.C., my commute from the neighborhood of Mount Pleasant, two miles from downtown, to my office in Arlington, Va., was just 4.5 miles and 12 minutes by car without traffic. But by Metro, it took 50 minutes door-to-door.

Faced with that kind of tradeoff, a lot more people will drive to work. We should bring the jobs back into the city so they don’t have to.