Kanye West says design can save the world; students respond 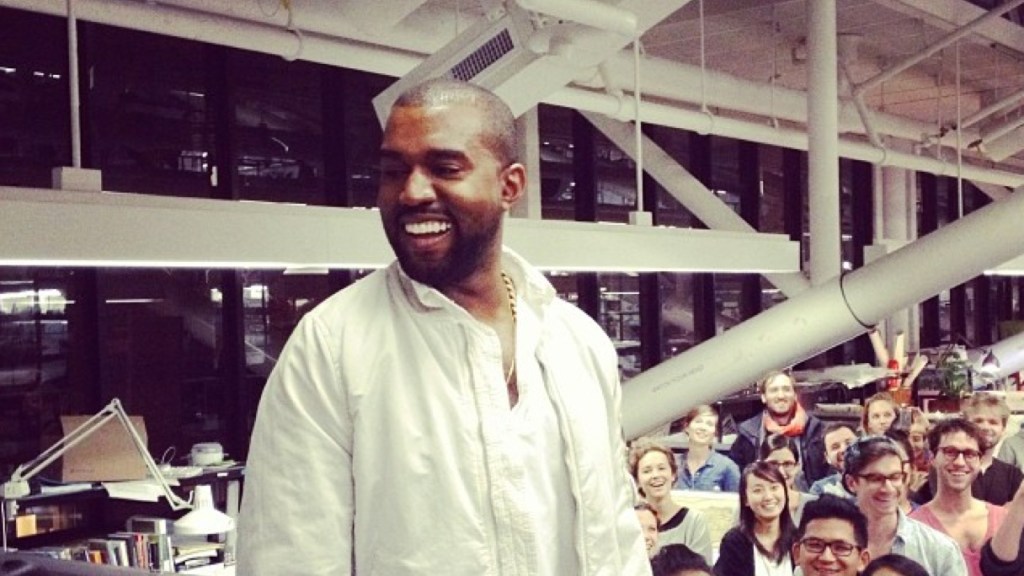 Kanye West says design can save the world; students respond

Hip hop savant Kanye West made the news a lot this week. First, there was the SNL spoof of him and his wife Kim Kardashian this past Saturday. Then he unrobed his new music video on Ellen DeGeneres’s daytime talk show. But he also made a surprise visit to Harvard University’s Graduate School of Design to meet with its African American Students Union, a group of about 20 black students working toward careers in architecture and urban planning.

If the numbers seem low for that union it’s because African Americans are extremely underrepresented in the design disciplines, as are people of color in general. This, in fact, is what the Harvard students invited Yeezy to their campus to talk about after hearing him vent about how people don’t take his ambitions as a designer seriously because he’s black. Last month, Ye told a radio host in Los Angeles that he will “design the new Sistine Chapel.” (One might argue that preposterous statements like that are what get him laughed off, not his race, but how preposterous would it sound if Mark Zuckerberg or Bill Gates made that same declaration?)

West showed up at Harvard while in Boston for a leg of his Yeezus tour. He had a closed-door discussion with the black grad students, and then, as they were concluding a tour of the school building, he spontaneously hopped on a table to deliver a speech — really a manifesto: “I really do believe that the world can be saved through design,” he said.

It was a bold performance that captured plenty of media attention. But obscured by the Yeezus media circus were the people who invited him and why. A few of the students responsible for bringing Kanye took a break from their end-of-semester finals to talk with Grist about the lack of of equity and inclusion in the world architecture. They too believe that design can save the world, but only if it is more reflective of the public, which is not all white.

Q. So what specifically did Kanye say that made you all summon him to Harvard?

Tarrido-Picart: Over the summer, Kanye West performed a series of interviews through which he exposed his interest in architecture and design in general. The New York Times published an interview where he stated his interest in Le Corbusier and architecture. Subsequently, in an interview with Zane Lowe on BBC, he expressed his frustration about not being taken seriously as a designer because he is black. These interviews sparked a series of discussions within the African American Students Union here at the Harvard Graduate School of Design. After that, we decided to send him a letter, expressing our shared frustration.

Q. It was that simple? You sent him a letter and then he decided to show up?

Tarrido-Picart: The letter was sent through a personal contact. Yeah, basically, it was that simple.

[Editor’s note to self: Setting reminder to use that personal contact I have with Soledad O’Brien to send her letter about frustration with lack of diversity in journalism, with hopes of getting same visit.]

Q. So what exactly are your frustrations as black architects?

Hansley: I don’t think any of us view ourselves as black designers, or minority designers first. We are designers. But there are subtle things that let you know that there are still prejudices. Perhaps because there are so many boundaries to entering [the profession].

Zewde: The underrepresentation of people of color in the design disciplines is bigger than numbers, bigger than just presence. Because design as an act is loose and improvisational — more so than say, engineering — it really draws from emotions and empathy and personal values. This is important, because everything is designed. The doorknob, the home, the park, the street, the city, the landscape… And in this way, a diverse range of design professionals, with many perspectives represented, suggests a deeper well of creativity, dreaming up a wider range of what’s possible.

Boateng: Underlying the numbers is the lack of a sense of a critical mass underneath you, in the form of young people who are exposed to design as a field, and see it as an available option. The frustration is that we are the fortunate ones, and that young people of color aren’t generally exposed to these disciplines, and that not enough of them see it is a way to make a positive change in the world.

Q. What do you mean by you “are the fortunate ones?”

Boateng: When you meet other black students here at Harvard and you tell them you’re at the design school, the first reaction is usually, “I didn’t even know there was a design school here.” This really speaks to the lack of exposure in communities of color, and a funneling of talented students to other disciplines.

Q. Is there a hope that Kanye’s Harvard visit might help expand their exposure?

Cox: Kanye right now has this unique position in society that when he speaks, people listen and react. So he has a powerful platform, and we are happy that this is something that he wants to push because we know he will reach a broad and deep audience, larger than we ever could.

Q. Was there a moment in the discussion with Kanye when you realized that he really did speak your language, both culturally and professionally?

Boateng: I’ve always known that Kanye speaks our language because he speaks the language of creativity, of imagination, of building out your dreams and aspirations bigger than anyone has done before. If you look at his music or the work he does with fashion, design, even architecture, there’s always a strong belief in his own ideas and imagination and that those ideas should live in the world as he sees them.

Q. When around white students/professionals in your field, do you feel there is a language barrier? Meaning, a difference in the way you as people of color talk about or see design as opposed to how they talk/see it?

Hansley: My knee-jerk reaction is to say no, there is no language barrier. But I will say in architecture that there is this push to feed us so much information that race and politics don’t seem to have a place in our pedagogy. We are either focusing on issues of the past and how they influence space, or we focus on our current projects in the studio. If you try to institute some social change in your project, it’s seen as a deviation from the project.

Tarrido-Picart: One of the problems is that in academia, the question of race and poverty gets abstracted to a level where there is a loss of humanity, in understanding what’s behind it. On the other hand, while in Boston, I had the chance to work with City Life / Vida Urbana, an organization that concentrates its effort on fighting foreclosure in black and Latino neighborhoods, and when we discussed the questions of racism and foreclosure, we naturally arrived at the question of urban planning. I feel like when one is  engaged with these questions hands-on, one does not need to be a scientist to understand the implications.

Q. Kanye said that design can save the world, do you all believe that?

Tarrido-Picart: Yes. If design means the act of human self-organization, cooperation, vision, and intervention … then yes.

Q. Can design save the world from climate change? In Kanye’s speech, he said: “I believe that utopia is actually possible — but we’re led by the least noble, the least dignified, the least tasteful, the dumbest, and the most political.”

Tarrido-Picart: Climate change is something you have to tackle at the global scale. A report came out from the Department of Defense making the projection that the next line of defense will be how to respond to geopolitical changes that force people from their respective homes and coasts as sea-level rise becomes more problematic. In New York City, [Hurricane] Sandy showed you can no longer just ignore these questions, like how it can operate without its subway system, or how do you design a new subway and switch system that can accommodate that kind of density without compromising the health of all those people.

When Kanye said he wanted a utopia, I personally didn’t read that as utopia in the literary sense, but rather him saying that the future has to be thought out, because if not, we won’t be prepared for what’s to come. You can come up with 20 to 30 different scenarios that can correct the climate change problem, but at the end of the day the problem is politics.

Q. I want to push back on that idea that design can do the trick if politics just got out the way. Historically, there were people who used that logic to design concentration camps and bigger plantations.

Hansley: I don’t think we’re arguing against politics at all. I think if you break down how you define design or even how you design politics, what’s lacking right now is the aspect of collaboration. Politics is design, but I feel like there is so much deadlock in so many instances that it fails to succeed as design because of the lack of collaboration the and lack of movement.

Tarrido-Picart: Yeah, look at one scenario, with Le Corbusier, the architect Kanye referred to. He said in many instances that architecture alone could save Europe from war, from poverty, and he acted upon it, like when he built L’unite d’Habitation and plans he had for cities like Chandigarh and Brasilia. But time and time again we saw that because the designs and proposals did not understand the dynamics of real people in interaction, and the democratic nature of societies we live in, his projects actually turned for the bad. So we have no illusion that design by itself can save the world, but we know it’s crucial in how to shape the world for the better.