Lake Mead, the body of water formed by the Hoover Dam, is the United States’ largest reservoir, supplying water to 25 million people across Arizona, California, Nevada, and northern Mexico. It’s also looking rather scant lately, to put it delicately.

Due to long-term drought and increased demand caused by the booming growth of the cities that source their water from it, Lake Mead hasn’t been at full capacity since 1993. And the situation has become even more dire in recent years as snowpack in the Rocky Mountains has declined: Since 2000, Lake Mead’s water level has only reached its historical average five times.

Why is Lake Mead lower than it’s been since its creation in the 1930s? A possible answer, WQAD News points out, can be found just 30 miles away from the shrinking reservoir: The neighboring city of Las Vegas has quadrupled in size in the past thirty years. Taking that into account with the growth of other Lake Mead-fed cities like Los Angeles and San Diego, it’s easy to see how the lake is dwindling.

While this is clearly a problem, it’s hardly an unexpected one. Moving millions of humans — who require water to live — into the desert clearly comes with some challenges.

“Historically, droughts last four to seven years, and the West has been in a drought since 2000, greater than double the average duration…,” said Terry Lowe, water resource management director of Surprise, Arizona. “Are we actually in a drought or is this truly how it is? And should we get accustomed to this for the foreseeable future?”

Unless the drought ends soon, it looks getting accustomed to it may be the only option. See NASA satellite images from Lake Mead in 1984 and 2016 below. 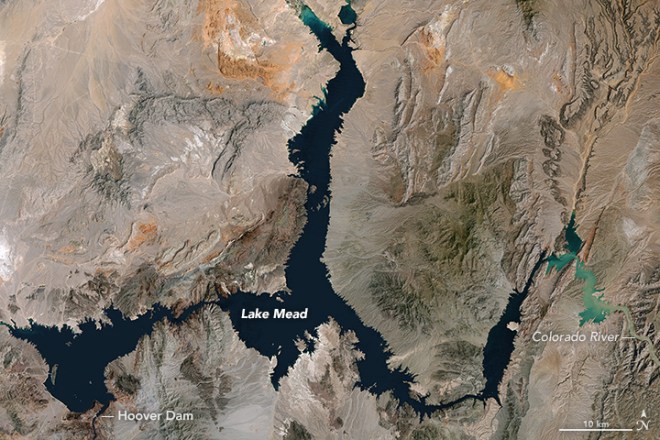 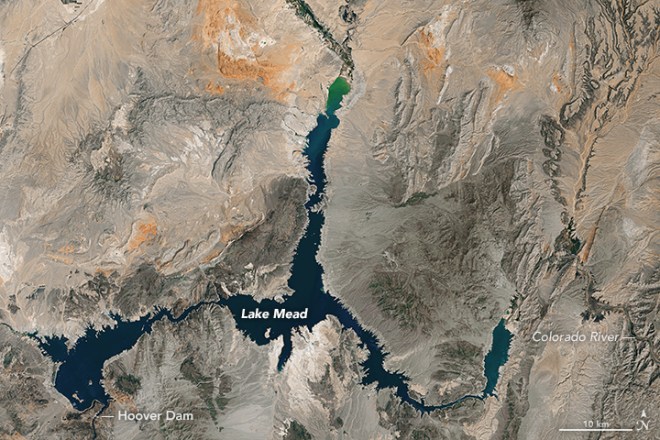