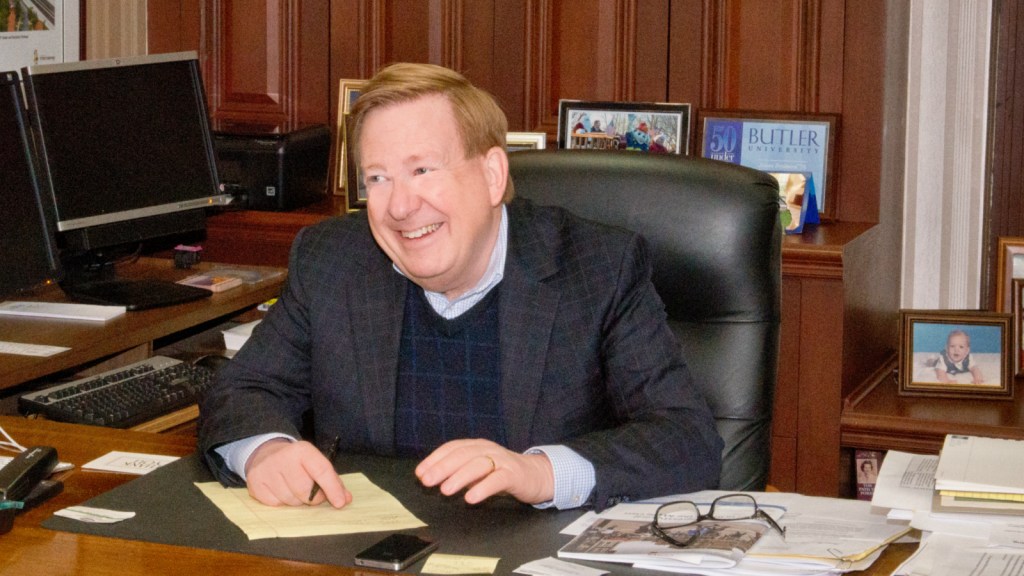 Jim Brainard, the six-term mayor of Carmel, Indiana, may seem like a typical Midwestern Republican, but he doesn’t govern like one. Carmel, a city of 86,000, is a suburb of Indianapolis. Over the course of his 21-year tenure, Brainard has made it steadily greener and more bicycle- and pedestrian-friendly. Those improvements have cut the city’s greenhouse gas emissions — and helped Carmel rank consistently in recent years among the nation’s best places to live, according to Money magazine.

At the same time, Brainard is a Republican and proud of it — even though his party just adopted a stridently anti-environment platform. He spoke with Grist by phone about what it’s like to be a green, urbanist Republican.

Q. Will you be at the Republican National Convention this week?

A. I’m a delegate. I was selected by the Indiana county party chairs.

Q. Does that mean you are a pledged delegate? For whom?

A. Yes, Donald Trump won our state primary, so I’m pledged for him. Personally, I was John Kasich’s co-chair in Indiana. I haven’t endorsed anyone since he dropped out.

Q. How do you square being tough on climate change with being a Republican?

A. There are multiple paths to the same result. Conserve is the root of the word conservative. We ought to be preserving our fossil fuels if they’re needed in a future emergency. We wouldn’t have to be involved in as many of the wars we’ve been involved in if we weren’t protecting our flow of oil. Whether one chooses to believe the scientists or not, there are many reasons to reduce our use of fossil fuels. In terms of science, a conservative ought to err on the possibility that [scientists] might be right.

Q. What is your proudest environmental achievement?

A. We’ve done a lot of things. One thing, which we did for other reasons, but it has huge environmental benefits: We’ve built the most roundabouts of any city [in the U.S.]. Initially it was because we wanted a reduction in fatalities and injuries from car accidents. It saves electricity on traffic lights and it saves millions of gallons of fuel per year because people aren’t sitting idling at lights. It’s more efficient to just slow down than to stop altogether and restart.

Twelve years ago, I issued an executive order for our fleet of city-owned automobiles to be hybrids. We built a geothermal energy plant. We’ve done a lot of tree planting to absorb some of the carbon we’re putting out. We’re using the methane flame from our sewage to heat our biowaste to about 900 degrees, which turns the biowaste into fertilizer. So we’re no longer filling our landfill with biowaste.

Q. What other transportation policies have you implemented that reduce emissions?

A. We’ve created a bike-share program. We were a car-centric sprawling suburb. It was not walkable. So we took the little village area and turned it into an arts district. Then we master-planned a walkable downtown where people can work and live and play. Our goal is 190 miles of bike and pedestrian trails so people from almost every neighborhood now can get to the city center without a car.

Q. If you support smart growth and environmentalism, why are you a Republican?

A. These parties are big tents, unlike Europe where you’ve got nine or 10 parties on the ballot. Lots of people with very different opinions are in those tents. I grew up in a small town in Indiana and we grew up thinking that Republicans believe in equal rights and investments in education. Seventy-five percent of my city votes Republican. It’s cultural as much as anything. If I grew up in Manhattan, I’d probably be a Democrat.

A. The environment used to be a Republican issue. Teddy Roosevelt created the national parks, Eisenhower protected the Arctic, Dick Nixon signed the Clean Water Act, Clean Air Act, the Endangered Species Act, Ronald Reagan believed in the science of the hole in the ozone layer and joined the Montreal Protocol.

I’m very frustrated that some in my party are denying the science [of climate change]. It seems to rank up there with people who think the Earth is flat and the moon shot was a hoax. I grew up with the kids of farmers and preserving land was a Republican value. Since when do Republicans or Democrats want to drink dirty water or breathe dirty air?

Q. As a mayor, what federal policies would help you reduce carbon emissions in your city?

A. Energy and environmental block grants to local government. They were passed once during the economic stimulus. And this is a conservative idea: Government closest to the people gets to decide how the money is spent. We used stimulus money to switch out our street lights for LEDs. We got a 20 percent return on investment.

Q. If your city is 75 percent Republican, do you ever get public opposition to some of the policies you’ve enacted?

A. Our voters love what’s happened. Educational attainment levels in the city are very fortunate. I think most of our voters are fiscally, socially moderate to liberal, and in terms of innovation, creativity, lack of resistance to change, they’re a pretty progressive place.

Q. Even progressive towns often find it impossible to get rid of space for driving and parking, given how wedded so many people are to their cars.

Q. Mike Pence, the Republican nominee for vice president, is the governor of your state. What do you think of him?

A. He has balanced the budget. Our economy is good, ahead of the national average and neighboring states. I think he has been distracted by some social issues in the last year, but overall has been a good governor. He’s also a very nice man.

A. And I disagree with him about that.

Q. Or evolution, or that smoking causes cancer.

A. Are you sure that he said that smoking doesn’t cause cancer?

Q. Yes, he said, “Despite the hysteria from the political class and the media, smoking doesn’t kill.”

A. I had never heard that quotation before. It’s very disappointing.

Q. Why do you think so many Republican politicians reject climate science?

A. In the primary system, so few people vote and they tend to be far right or far left. It forces candidates to the extreme. The people who do well run to the far left or far right. They’re so committed to the far left or the far right that they get into office and it’s impossible to get things done. Whether they’re privately moderate and don’t really believe some of those things, I don’t know. States should do what California did with nonpartisan primaries and get candidates in the middle. Also the system of money in politics has to be addressed by the Supreme Court.

A lot of Republicans are bothered by the science deniers. I don’t call them climate skeptics; they’re science deniers. By speaking out, I hope that other Republicans who are concerned about the shape of the planet that we leave to our children will speak out too. Just because Democrats are for something doesn’t mean Republicans can’t be too. Can the Republican Party get back to the principles that made it a strong party years ago? I hope so.