You don’t have to look 85 years into the future to see what a sinking world looks like — you only need to look as far as Miami.

Climate scientists have been warning the world about sea-level rise for years, pleading with governments to cut back on carbon lest all our coastal cities go the way of Venice. In 2014, the Intergovernmental Panel on Climate Change released its fifth Assessment Report, predicting that oceans would rise more than three feet by 2100. Those projections make for some alarming visions of the future — cities water-logged, monuments submerged, islands created.

But the flooding is already happening in Florida. At the University of Miami’s Department of Atmospheric Sciences, Brian McNoldy and other researchers have been accumulating sea-level data from Virginia Key (a small island just south of Miami Beach) since 1996. Over those 19 years, sea levels around the Miami coast have already gone up 3.7 inches. In a post updated Monday, McNoldy highlights three big problems that follow from those numbers — and they should worry all of us. 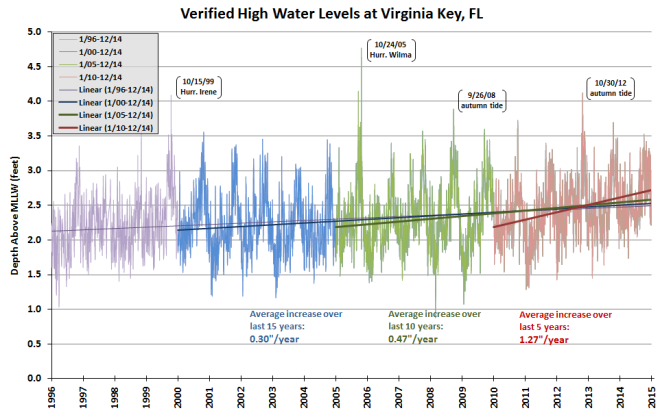 First: Sea-level rise is accelerating — perhaps faster than the IPCC has projected. When McNoldy tracked the average daily high water mark, when flooding events are most likely to occur, he saw it increase over time — but he also saw the rate of that increase go up. The last five years saw an average increase of 1.27 inches of water per year. If that rate holds steady for the next 50 years (and if McNoldy is right, it will only get worse), high tide levels in Miami would go up over five feet.

Second: Predictions about day-to-day tide levels are less accurate than ever, threatening the city’s ability to plan for weather events. Tidal predictions are made through what’s called “astronomical factors” — essentially the moon’s orbit around the earth. But these don’t take into account factors like weather or sea-level rise — so as climate change exacerbates sea-level rise, tidal predictions will be more and more unreliable. While water levels in May 1996 typically were close to predicted values, McNoldy observed that the same values in May 2014 were consistently higher than predicted. That kind of discrepancy can’t be caused by weather alone. 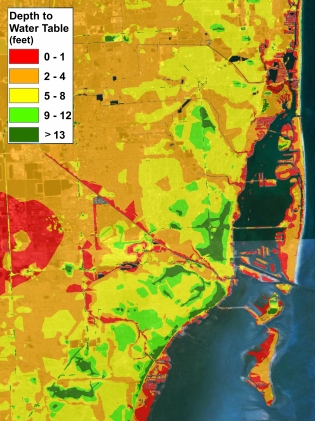 Map of the Miami area, where colors indicate the depth to the water table. A lot of area is covered by 0-4 feet, including all of Miami Beach.Keren Bolter, Florida Atlantic University

Third: Besides creating higher risks of flooding, sea-level rise is creating an unexpected danger: saltwater intrusion into aquifers used to extract freshwater. Almost 90 percent of south Florida’s drinking water is supplied by porous limestone aquifers. As sea levels rise, the saltwater exerts more pressure on the fresh water in the aquifer, and fresh water is pushed off further from the coast. Already, some cities have shut down wells because of saltwater contamination.

Based on what scientists can glean from sea-level data from the past 20,000 years, McNoldy estimates that the world could still have up to 100 feet of sea-level rise to go. He believes even if humans were to slow down or stop the human-made factors contributing to climate change, “we’re already pretty well committed to significant sea-level rise. We would be more prudent to consider how to adapt to those conditions.”