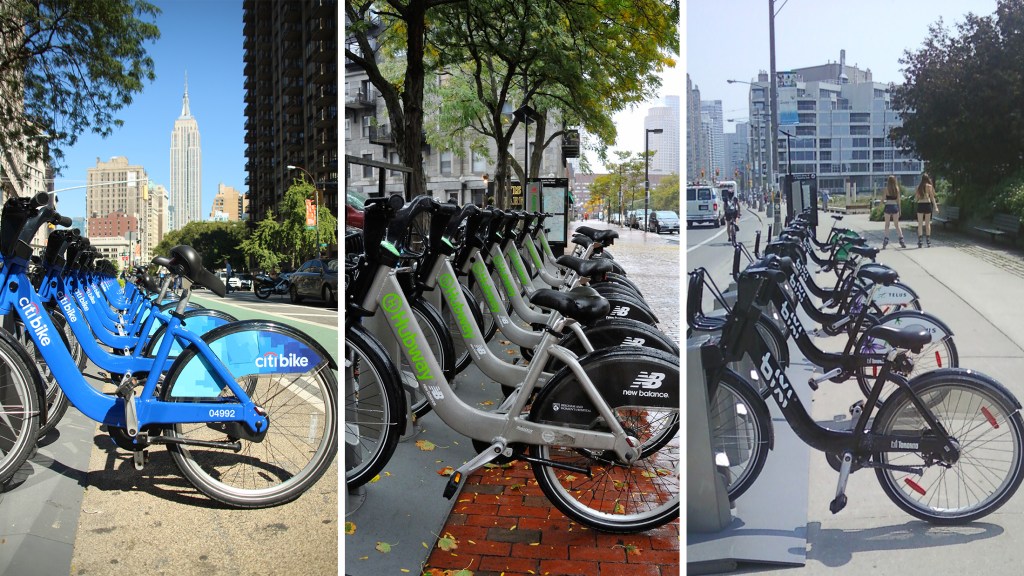 My life as a bikeshare tourist began three years ago. Before, whenever I visited a new city, I felt like it was hard to get a sense of the local geography. Traveling by subway was fast and provided an excellent opportunity to check out what other people were reading. But the experience of going down into the subway and reappearing in a different location was disconcerting. I felt like I was teleporting, or a prairie dog.

When it works, bikeshare is like the Sesame Street of urban cycling: The bikes are big and cartoonish and comfortable. Cars seem to give you more space on the road, possibly because you look like a total n00b and they don’t trust you to know what you’re doing. And moving from neighborhood to neighborhood gives you a sense of how the city fits together.

I’ve only used bikeshare in three cities, but hope to use more. (Cleveland, I’m looking forward to it. San Francisco, can’t wait ’til you’ve got enough of a network to bike to more than just the shopping malls downtown.) Here, I give you: what I’ve learned so far.

The first time I used a bikeshare was at a conference in Boston. At the end of the day there, I felt as though I had spent hours paddling a tiny boat through a howling vortex of schmooze, unsure of where or how I might come ashore.

I stepped outside the hotel to get some air, and then I saw it: a row of silver bicycles attached to a solar charging station. It was Boston’s Hubway system, installed July 2011, only a few months before.

Fortunately, I had a credit card on me. While earlier bikeshare networks were hampered by the way that bikes kept disappearing, modern bikeshare networks depend on credit cards to make sure the bikes are actually returned: Hefty fees are incurred if they aren’t. My past, youthful self, who refused to use credit cards way longer than was practical out of punk/DIY idealism, would not have been able to check out a bike, and neither would anyone else who is outside of the banking system, either voluntarily or involuntarily. The dependence on credit cards also means that the bar to use a public transit system like a bikeshare is higher. Hubway needs access to your bank account, but anyone with $2 can ride the bus.

I used my card to check out a bike and pedaled in the direction of the Charles River. I had to return the bike to one of the stations around the city in half an hour to avoid a penalty, but I wasn’t sure where I was going to return it: The station didn’t have any paper maps of where other stations in the city were, and I didn’t have the kind of phone that could download one. The late fee, though, was minor — about $6. I could pay $6. I biked around the city for hours.

Hubway is not my favorite system. I wish it had more stations, especially near the bike paths along the Charles River. I wish that the bicycles didn’t get packed away in the winter. I almost always use it when I come to Boston, though. It’s easier and faster than figuring out the bus system, especially late at night, and it feels safer to be riding a bike at 2 a.m. than to be hanging out outside the bus shelter.

Bixi is an earlier rollout of the same system as Hubway — same bikes, same terminals, same interface to check out a bike. By the time I visited Montreal last fall I had Spotcycle on my phone, so finding terminals wasn’t a problem. Worrying about the usage fees that my phone company was going to hit me with for using my American phone on Canadian soil was a problem, and made the whole rental experience more expensive. It also made me miss maps — nice, sturdy paper maps, that never charge you roaming fees or run out of electricity.

That said, Bixi was my favorite bikeshare of them all. Stations were everywhere, so I was always able to return a bike before the late fees kicked in. My friends and I had a car that we could have used, but we never drove it — partly because Montreal was full of Bixi boosters, who talked about the system with the kind of enthusiasm that most cities reserve for their local sports team. “Just Bix it over!” someone said, when they invited us to a party and we mused about how to get there. Then, when we arrived, “Did you Bix it?” usually with some kind of high-five component.

“How does this system make any money?” I wondered out loud, as we biked back to the apartment we were staying at. We had been using Bixi for three solid days, and all we had paid was $15 apiece for a 72-hour pass, or about the cost of one very fancy sandwich. A more conventional bike rental would have been about $40 a day.

“Maybe not everything has to make money, Heather,” one of my friends said.

Bixi, indeed, does not make money, which has its drawbacks. In 2011, the company was bailed out to the tune of $108 million in loans by the city of Montreal. This January, the city stepped in and took over the operation entirely, so that it could be managed as a nonprofit, instead of a company in need of repeated cash infusions.

I’ve seen more people on bikeshare bikes in New York than in any other city with a program. This is despite the fact that, in Manhattan, the major bike lanes have been appropriated by everyone: pedestrians, people pushing overloaded garment racks, people pushing catering carts, people pushing recycling carts.

Still, I avoid using CitiBike in New York, because the interface to check out a bike is horrible. It can take as many as 20 minutes of typing, failed card readings, and being sent back to the main menu without any warning before a bike is finally yours to check out. There’s a reason for this: New York’s bikeshare has a different software system managing it, because of a quarrel between the hardware and software manufacturers of the older systems.

New York is also frustrating because the area where a bike share would be most useful to me is in the underserved-by-transit areas of Brooklyn, while CitiBike has yet to move south of Fulton. In the Big Apple, I’ve been sticking with my old bikeshare routine: Borrow A Friend’s Ill-Fitting Bike.

The success of bikeshare systems in the U.S. (and Canada) is amazing. I worry, sometimes, that it’s a civic fad — as when cities got really excited about building zoos, or aquariums, or velodromes. I certainly hope not; I want to continue being a bikeshare tourist.