New U.S.-Canada bridge will carve through one of Detroit's loneliest neighborhoods 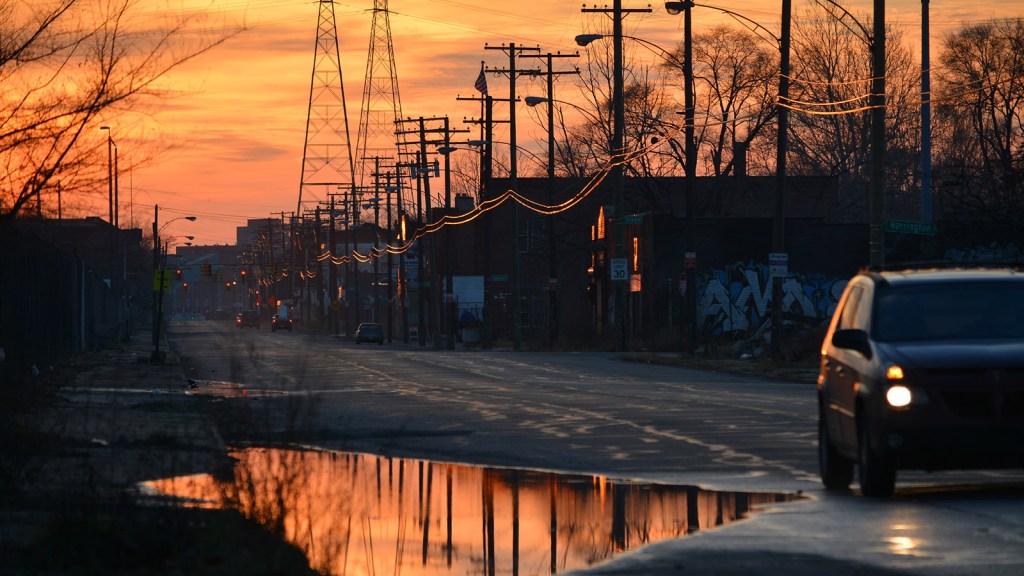 New U.S.-Canada bridge will carve through one of Detroit’s loneliest neighborhoods

Like much of Detroit, the Delray neighborhood has fallen hard. Its blighted buildings, quiet streets, and fields of overgrown weeds where pristine lawns used to be are all telltale signs of the urban decay that Detroit has become known for. But change is coming to this long-neglected corner of the Motor City, in the form of a massive bridge that’s right out of the glory days of urban freeway building.

Here’s the short version of Delray’s story: Once a booming industry town full of shops, restaurants, and bars, Delray hit its peak in the 1930s with a population of about 24,000. Over time, as factories closed and the suburbs drew people away from the city, Delray’s population shrank, hitting around 18,000 by the 1950s. Then, the deathblow: The city built a freeway along the northern edge of Delray in the late ’60s and early ’70s, cutting it off from the rest of Detroit. Within a decade, the population dropped to 9,800, and continued to fall.

Today, Delray is almost completely surrounded by heavy industry. At one end of the neighborhood, there’s Zug Island, site of a decades-old U.S. Steel mill and the Detroit Wastewater Treatment Plant, which services more than one-third of the state’s population. At the other end of the neighborhood, there’s the Ambassador Bridge, depositing thousands of trucks into Detroit every day (about 25 percent of trade traffic between the U.S. and Canada crosses the Ambassador). North of the freeway, there’s a freight yard. Along the river to the south, there’s the LaFarge Cement silo.

The community is still home to more than 2,500 people, but it’s also home to a lot of empty lots and burned down houses. More than 150 structures around the neighborhood need to be boarded up, and more than 170 lots are blighted with illegal dumping. Poverty is high and pollution is everywhere, and a massive international trade crossing is about to run straight through the middle of it.

The U.S. and Canada announced back in 2004 that they needed a new or expanded crossing over the Detroit River to ease the Ambassador Bridge bottleneck. By 2008, the two countries had decided on a new $2 billion bridge connecting Highway 401 in Windsor, Ontario, to I-75 in Detroit, through Delray. The project stalled for a few years as the Ambassador Bridge’s billionaire owner waged a long, expensive war against the new crossing in the hopes of maintaining his own monopoly over the river. But plans for the publicly owned bridge are finally moving forward.

In February, Canada agreed to pay for the $250 to $300 million U.S. plaza in Delray after having already agreed to bankroll the rest of the bridge. The U.S. has been slow to pony up cash for the project, but Canada is desperate to get the ball rolling and is going to let the U.S. pay it back over time with toll revenue.

Meanwhile, the project has been looming over the residents of Delray. For years, they’ve been hearing about the chunk of land it’ll require, the thousands of construction jobs it’ll bring to Michigan, the thousands of trucks it’ll usher through the neighborhood. About 700 Delray residents will have to move to make way for the 170-acre customs plaza, and those who remain will have to live with the bridge.

Scott Brines is one of the latter. His house sits about four blocks from where the plaza will be, and he said that he and others in the community are worried about what the bridge is going to do to their already neglected neighborhood.

“The city has always said long-term plans for this area is industrial, and they’ve said it for years, since the ’50s. They’ve said this was industrial. Well, it’s not. It’s industrial and residential,” he said. “You can’t just keep doing that to a community, and that’s what we’ve been left with over the years — just each developer comes in and takes a little piece, and the community doesn’t want any more of that.”

This video from the Community Development Advocates of Detroit gives you some indication of what the bridge will mean for people who live in the community:

The residents of Delray have long accepted the inevitability of the bridge. In return, they’ve made a few small requests for compensation: some green space, a few bike trails, maybe a way to mitigate the already-high diesel emissions in the area (asthma rates are unusually high in Delray and other Southwest Detroit neighborhoods).

Brines said that he’s worried that Delray will end up with the same notoriously bad air that now surrounds the base of the Ambassador Bridge. “We know it’s going to bring that same effect to our neighborhood, and nobody wants to live with that,” he said.

In an email, Michigan Gov. Rick Snyder’s press secretary, David Murray, wrote that it’s still too early for there to be any specifics regarding community benefits.

“It is a little premature at this point. We still are very early in the design process for the bridge, including how and where it will connect with major roadways. State agencies have been working on a community benefits plan with Delray residents that include parks and green space,” he wrote.

But after years of asking for assurances that they’ll be taken care of, the residents of Delray feel largely ignored. “We’re a long way from really believing that there’s going to be a great community benefits package,” said Simone Sagovac, head of the Southwest Detroit Community Benefits Coalition, which formed in 2008 to advocate on behalf of Delray.

A proposed ordinance currently up for a vote in Detroit’s city council would require developers behind projects of a certain size and with a certain amount of taxpayer subsidies to sit down with community members and discuss benefits packages. But while people in Delray support the ordinance, they probably wouldn’t benefit from it since the bridge project is already well underway.

According to Mark Butler of Transport Canada, there should be a developer in place sometime later this year, and that developer will be in charge of working with Delray residents. Meanwhile, scenes on the Canadian side of the border are looking positively idyllic.

Back in 2008, an environmental impact report pegged the Windsor-Essex Parkway in Canada as the ideal access road for the crossing, prompting a massive renovation. Now it’s called the Herb Gray Parkway and is surrounded by 300 acres of green space — more than half of which features preserved native landscape — and more than 10 miles of walking and biking trails. During construction, endangered plant and animal species were relocated to new habitats, materials from demolished buildings were salvaged and donated, and residents of a social housing development that stood in the way of the parkway were relocated to new homes.

It’s a stark contrast to Delray, where Sagovac said that residents in the footprint of the bridge don’t even know how the buyout process will work. She said she expects the Michigan Department of Transportation to get in touch with those residents sometime next month, and in the meantime, the benefits coalition is providing them with free legal support.

“There are two choices that everyone has in this process,” Savogac said. “How are you going to invest in and ensure quality of life for the remaining community, or what are you going to do to offer the rest of the people a way out? It’s got to be one or the other.”

There’s currently no option on the city or state level to buy out the rest of the neighborhood, and most residents either don’t have the means to leave or don’t want to because Delray is their home.

And so, after decades of industry encroaching on their neighborhood, destroying their air, and sending their property values plummeting, Delray residents are left bracing for what could be another deathblow. It seems the U.S. still has a thing or two to learn about the utterly destructive nature of urban freeways.

Who knows? Maybe Delray will get lucky this time. Maybe in 10 years, trucks crossing over from that beautiful green parkway in Canada will enter the U.S. not through a rundown and neglected neighborhood, but through a revived Delray. At this point, your guess is as good as theirs.