The Anacostia neighborhood of Washington, D.C., reacted less than embracingly last month to the idea of an artist submerging a “mock gas station” into its eponymous river as an artistic statement about climate change.

Mia Feuer’s “Antediluvian” proposal was supposed to clue drivers traveling the bridge over the Anacostia River that the gas in their tanks was abetting climate destabilization. The D.C. Commission on the Arts and Humanities ordained Feuer’s concept as a crown feature of its upcoming 5×5 Festival.

But the mostly African-American, working-class Anacostia community, which has been fighting for the government’s attention to clean the river for decades, felt that the project sent the wrong message. The project was ultimately nixed when the D.C. Department of the Environment said that it would interfere with efforts underway to mitigate river pollution. Rejecting the site was appropriate — as Feuer has accepted herself — given that D.C. has been less than embracing of Anacostia for basically all of its history.

As disappointing as this decision is for those who donated thousands of dollars to see this climate change critical Elenchus happen, Feuer, an accomplished artist well before this, may pull “Antediluvian” off at another time in another city.

Still, the controversy that arose from the project’s mere announcement illustrates what happens when the various activist tributaries of climate change, public art, environmentalism, and environmental justice converge. Each feeder carries its own baggage and that means it’s fated to get messy at the confluence — that is unless social equity is considered up front.

Let’s unpack some of this baggage, as it helps explain the Anacostia River art fiasco and why it played out the way it did.

The baggage: The climate movement is often perceived as believing its agenda trumps all others, even the concerns of its non-climate environmental kin. This kind of absolutism is likely one of the major reasons that the movement hasn’t made more progress. Feuer actually was considering the local environment, though. Along with the gas station dunking booth, she also planned riverboat lectures and workshops, where the public could learn about the problems of the dirty river alongside the global problems of dirty energy. Those plans were obscured, however, when sketches of her concept swiftboated through the media, fueling perceptions that it was purely an abstract on climatology.

“A lot more people need to get a grip on climate change before it’s too late,” said Doug Siglin, executive director of the Anacostia River Initiative. “But people also need to get a grip on what belongs in the Anacostia River and what doesn’t. Here are five things that don’t belong there: Toxic chemicals. Trash. Excrement of any kind. Oil and gas. And mock gas stations.”

The local environment — whether defined by plant and animal life in the river or the people living in the adjacent community — has been compromised since the district was first planned in the late 18th century. Siglin recounted this history to me as he and Anacostia Riverkeeper Mike Bolinder took me on a river tour of the Anacostia last week.

The baggage: For over two centuries the “Forgotten River,” was effectively used as a latrine where D.C. dropped all manner of trash, sewage, and toxic waste. The biggest polluter historically has been the federal government itself, which allowed its Navy bases along the river to dispose in it at will. Still, some 85 percent of the river’s pollution comes from upstream cities in Maryland.* Photo from Anacostia River tour of litter traps installed recently to keep trash and plastic bags out of the river.

Riverkeeper and EJ activists only recently secured commitments from the D.C. government to finally help unsoil the river’s body and reputation, which is moving along under the Sustainable DC Plan. The environmental consulting firm Tetra Tech has been collecting samples from 134 locations along the river over the past month, with more testing scheduled. Anacostia’s pollution has been sampled and studied for decades, so there may not be many surprises. But Tetra Tech’s is expected to be the most comprehensive and will result in a 2018 “Record of Decision” report explaining what exactly is in there and recommendations on how to best to remediate. 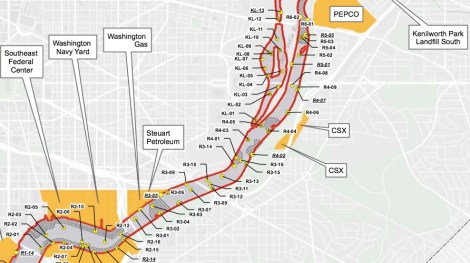 It’s one thing that the imbalances and impurities of the river’s water chemistry are cutting off fish and plant life. But the river also symbolizes a dividing line between Anacostia folk and “This Town” D.C. — socioeconomic imbalances in the greater Washingtonian chemistry that for decades cut off the livelihoods of black Anacostia residents who may have prospered if better connected.

Any public art project needs to serve a function. This is uber-true in disempowered communities where residents understandably don’t appreciate their neighborhoods being used as the playpens or sketchpads of experimenting artists. Such projects allow voyeurs to gawk and gaze at the disfigurations of a place as pure exhibit. The Gawkers go home while the place is left disfigured.

Not even Banksy should get a waiver from this, no matter how progressive his messages. It’s perhaps because of Banksy, though, that many artists believe they can get away with it, and with assumed community support.

The baggage: When community members — black and brown youth in particular — create public art, it’s criminalized and labeled “graffiti,” with the host canvas labeled as “vandalized.” When corporations adorn a community with ads, it’s just “commercialized.” When arts commissions do it, it’s rationalized, intellectualized, if not immortalized.

I moved to New Orleans right around the time the citywide Prospect international art biennial launched. One of the Prospect exhibits involved converting blighted houses around the city into art installations. I first landed in the St. Roch neighborhood, one of New Orleans’ most impoverished and crime-riddled areas, and a Prospect “Safehouse” project was behind the house I rented. For the project, a larger-than-life bank vault wheel was installed on the front facade of someone’s former home that had been hollowed out either by poverty, Katrina floodwaters, or some mixture thereof.

After Katrina, with new development rent and insurance rates sky-high, there was a shortage of affordable housing. Artists turning former residencies into playhouses didn’t quite help that. New Orleans had plenty of Banksy’s also — no shade.

Meanwhile, one of the city’s greatest art exhibitions, Project Be, a graffiti experience in the abandoned Florida public housing projects, were off limits to the public, at the legal demand of the housing authority.

Building equity around public art means natives can’t be flagged when they are engaged while outsiders have free creative license in their neighborhoods. It also means making sure everyone’s on the same page about the purpose and function of the project.

As Justice Department attorney Quentin Pair explained to me last week, meaningful involvement of the community is a central tenet of environmental justice.

The baggage: Decisions are often made about a community’s resources without the affected residents’ input, especially when those residents are African Americans, Native, Latino, or of low income. These communities become further estranged when they voice their concerns and no one in positions of power comes to their aid.

But in this case, community groups like the Historic Anacostia Block Association joined with environmental organizations like Groundwork DC and the prominent Federal City Council, headed by Siglin and former D.C. Mayor Tony Williams. Coalesced under the banner United for a Healthy Anacostia River, this is the kind of cover that disadvantaged communities need when people start planning on their property.

Now granted, EJ issues typically run a lot deeper than decisions about art projects. As controversial as this was, no residents would have been displaced, lost jobs, or developed cancer from Feuer’s installation. Also, it was not a done deal that the Anacostia River would have been the guaranteed location for it.

But that’s the point: In the past, such decisions would have been a done deal before the community ever learned of it. In this instance, the community was able to voice loud and clear, “You must first go through us.”

Black Anacostians have a history of fishing and subsisting off the river, and some still do (even though it’s a health risk). Children have been baptized in that river. Feuer seemed to want to simulate a similar baptism with her installation: The submerged gas station would have been pulled from the water a few months after installed, hopefully creating a renewed energy for renewable energy among those who saw it.

But no baptism takes place without a commitment first to joining the church community. And so it is with environmental justice: We need tighter commitments with these communities.

And now the real baggage

On top of all of these problems, there was an actual baggage problem — littered plastic bags from grocery and drug stores that were accumulating in the river. That’s why litter traps were installed in various points along the river. It’s also why there’s been a five-cent baggage fee in D.C. since 2010, meaning customers must bring their own reusable bags to stores or else they’re charged a nickel for every bag the stores issue them: That fee goes towards Anacostia river restoration efforts. But the much murkier stuff clouding the river is what lurks way below the surface.

Feuer did not create the Anacostia’s problems. She had a cool idea. It was only presented at the wrong place at the wrong time. She told me she had just started making inroads with Anacostia community groups right when her sketches leaked. The tide of public input moved quickly, though, and in this circumstance, it should have.

The lesson everyone is learning here: Install equity upfront, then we won’t have to pay for the baggage later.