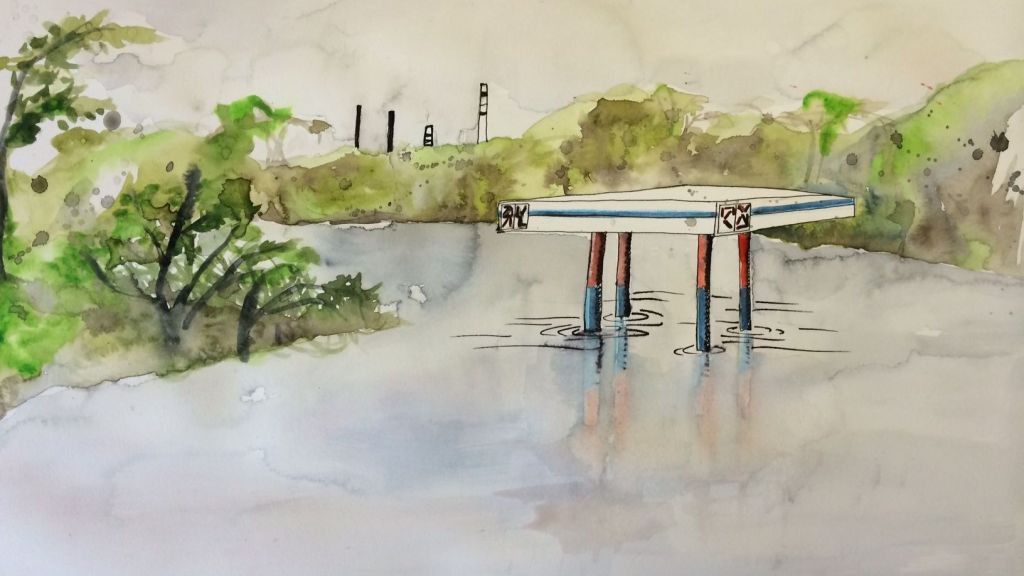 Artist Mia Feuer’s planned “ANTEDILUVIAN” art installation — a gas station mostly submerged underwater in Washington, D.C., as a statement on climate change and rising sea levels — is officially cancelled completely. Months of anticipation for Feuer’s proposed project were dashed last Friday when the D.C. Commission for the Arts and Humanities announced that ANTEDILUVIAN couldn’t be installed in Kingman Lake, by the Anacostia River, where Feuer had initially hoped to place it.

“After further consultation with the District’s Department of the Environment regarding the city’s on-going efforts to clean up the Anacostia River, DCCAH is working to relocate the temporary project outside of the Anacostia River and vicinity,” a spokesperson for the Arts Commission said.

But Feuer wrote on her Indiegogo blog this morning that her installation won’t be relocated anywhere, and that it was permanently banned from happening. It was supposed to be part of DC’s 5×5 Festival, a program the city’s arts commission is kicking off this fall with five noted curators picking 25 artists to feature public arts projects around the District — similar to Art Basel in Miami or Prospect in New Orleans.

But Feuer told me today that the arts commission had dropped ANTEDILUVIAN completely, even though hers was one of the highest profiled projects in the festival.

Almost from the moment Feuer made her plan public it had garnered media attention from plenty of outlets, notably The Atlantic’s City Lab. But all of that media spotlight might have been what led to it getting scrapped. Feuer told me that her plans had not been finalized for the project when word started to spread. When a number of organizations that work with the river and the neighboring southeast D.C. Anacostia community caught wind of it, they had some concerns.

A coalition called United for a Healthy Anacostia River sent a letter to the Arts Commission opposing the project. From the letter:

Given the many years of community investment and hard work to clean up and change the negative perception of the Anacostia River, this kind of project should never have been approved without broad stakeholder consultation. Moreover, in light of the decades of oil and gas pollution and environmental injustice to which the river and its nearby communities have been subjected, we believe that it is inappropriately heedless to encourage such a representation of oil and gas in the river’s waters.

In this regard, there could hardly be a worse public message than sinking an entire mock gas station in the Anacostia’s waters. If the public misunderstands the art’s intended message as  permission to put gas or oil in the river, the project could single-handedly set back the river restoration and undo years of effort on the part of the DC, Montgomery County and Prince Georges County governments to convince people to keep oil out of the water.

Basically, Feuer failed to clear her project with the community, so the community didn’t clear the project. A major reason why it was rejected for the Anacostia River location is that D.C.’s Department of the Environment is taking samples there as part of a remediation program, for the decades of pollution that have assaulted it, as mentioned in the letter. (I also wrote about this for the American Prospect.)

Feuer told me that she had been in touch with Living Classrooms, an environmental education program for kids that uses Kingman Island near the location where Feuer hoped to place the installation. That was the start of her community outreach, she said, but word of her plans got far ahead of her. This would have been her first public arts project, though she’s done many other art installations.

In addition to the gas station, the ANTEDILUVIAN proposal included workshops and lectures — held in the water on boats — on climate change impacts, green energy, and environmental awareness. That part of it will still go on, Feuer said. But the installation itself is permanently off the menu, at least for this festival. Feuer said she’s looking for other cities that might welcome the project at another time.