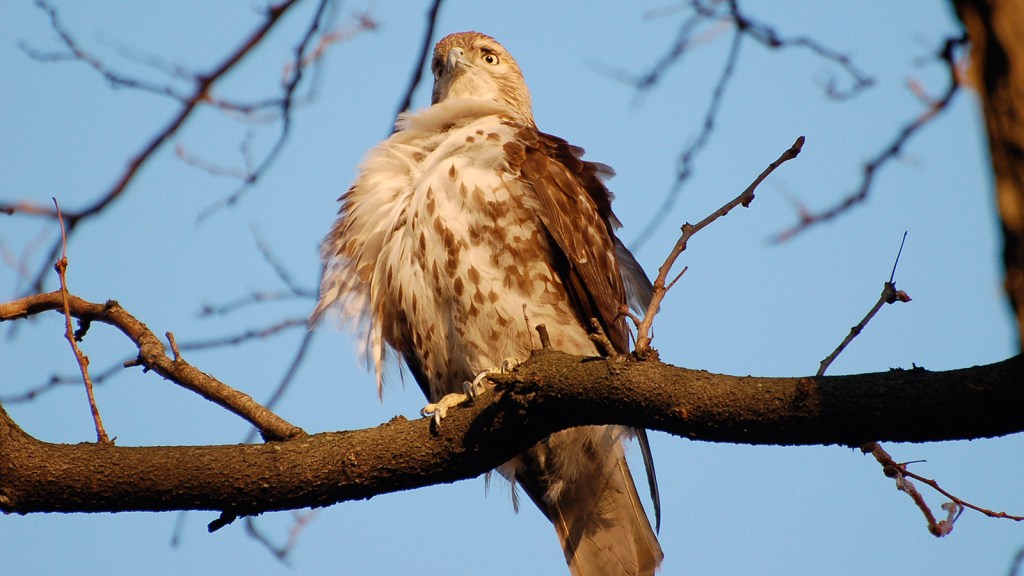 Robert
Between a hawk and a hard place

Several years ago, I noticed that hawks had moved into my neighborhood. Well, one hawk. A dead hawk, actually. It was lying on its back on my front porch with its little feet in the air, looking fierce and magnificent and just totally dead. I had never seen a hawk that close before. My roommate stood over it, taking pictures with her phone.

“Juvenile red tail,” she said. “I already posted a picture on the internet and three people already asked if they could come by and pick it up. What is it with our neighbors and taxidermy?”

The realization of how the hawk had come to die on our front porch sank in gradually. Hadn’t the landlords said something a few weeks ago about sending someone over to “deal with” the mice that were establishing a dynasty in the wall behind our stove? Hadn’t I not heard from the mice in a while?

The hawk had probably thought that it was its lucky day, finding these sluggish mice in our yard, probably all fattened up on our organic kitchen scraps. It wouldn’t have realized they were stuffed with poison.

It never occurred to me to do anything about this experience other than feel horribly guilty. But a few miles away from my neighborhood, a nonprofit grantwriter named Lisa Owens Viani was also seeing dead hawks. Owens Viani was somewhat versed in the ins and outs of neighborhood politics. (“I saved a creek once,” she said to me, nonchalantly, when we talked on the phone earlier this week.)

She also knew her hawks. Allan Fish, a biologist by training, and director of the Golden Gate Raptor Observatory, had been doing surveys of hawks in the area since 2002. Fish had noticed that the hawk population was on the rise — possibly because DDT, which had been banned in 1972, was finally working its way out of the hawk population. Hawks also seemed to be adapting to urban areas — nesting in skyscrapers and feasting on fat city pigeons that had gotten used to life without apex predators.

But when you’re a hawk, and eat 30 rats a week, odds are pretty high that a few of them are going to be poisoned. Allan Fish found that poison killed more hawks in the survey than anything else, including cars and power lines. One type of rat poison in particular — known as second-generation anticoagulants — seemed especially bad. They were designed to poison rats and mice with a single dose, but over a period of several days, so that they wouldn’t make a connection between the bait they had just eaten and their newly developing health issues, and so that they would have enough time to take the bait back to their nests and give it to all their rat and mouse friends. During this “dead rat walking” period, any hawk, coyote, dog, or housecat that ate them would eat not only the mouse or rat, but all the poison it was carrying.

To Owens Viani, this was incredibly unfair. We needed roads and power lines, but how often did we really need rat poison, especially now that wildlife that ate mice and rats was making such a comeback? Humans were trying to get rid of mice and rats, and hawks were out there ready to eat them. By accidentally poisoning hawks, people were just leaving a predator vacuum where the mice and rats that did survive had more room to multiply. Why did it have to be this way?

“Here they are,” said Owens Viani, “doing this incredible thing for us, and this is how we repay them. I feel so strongly about it.”

And so Owens Viani did something about it. She took photos of the dead hawks and put signs all over her neighborhood telling people about the rat poison/hawk connection. She tried to figure out who it was who had set out the poisoned rat bait. “I never did find the exact culprit,” she said. “Though I think I know who it was. I saw their face when I showed them the pictures.” The dead hawks stopped appearing.

Then, three years later, she began finding dead hawks around the neighborhood again. She decided to think bigger. She joined forces with Allan Fish and formed Raptors are the Solution, or RATS for short. They met with a sympathetic nonprofit — The Earth Island Institute — that agreed to be their fiscal sponsor and handle their paperwork and accounting.

All across the country, municipalities were falling in love with charismatic hawk families and then becoming heartbroken when, inevitably, members of the family would be poisoned. The companion and several descendants of Pale Male on 5th Avenue in New York City died of rat poison. So did Ruby, a hawk that nested on the 7th floor of an office building in Cambridge, Mass. Fans of Ruby set up a memorial research fund to study the effects of rodenticides on birds of prey.

RATS joined forces with other small, like-minded groups, like the Center for Biological Diversity and Poison Free Malibu, and started working at the small level, with cities. While cities couldn’t ban the most dangerous kinds of rat poisons outright, they could pass resolution asking stores within their borders to stop selling particular products — which was just the kind of low-risk do-gooder thing that a friendly politician could sign off on. After 21 cities joined the ban, the state of California began to notice.

That notice took the form of meeting with the California Department of Pesticide Regulation (CDPR). “We kind of never let up on them,” said Owens Viani. “This was a little crazy, but … every time I would get a report of a poisoned raptor or a poisoned pet, I would send it to them. They definitely got tired of us. But it worked. They knew they had a big problem in our hands. All these groups aligning themselves to pressure them made a difference.”

Banning anticoagulants was going to be tricky, because the thing that made them so dangerous to wildlife was precisely what made them so successful. But still, last March, something seemed to tip. After years of going back and forth with the EPA, rat poison manufacturer Reckitt Benckiser agreed to withdraw 12 formulations of anticoagulants from the market. And the CDPR officially banned consumer use of all second-generation anticoagulant rodent poison in California. This means that, as of this month, you can’t just walk into a hardware store and buy the most concentrated doses of rat poison (though a licensed exterminator would still be able to).

It’s hard to say whether this will have much of an effect on the wildlife body count. First-generation anticoagulants can be metabolized more quickly so that, in theory, they won’t move up the food chain as quickly, but they aren’t exactly a walk in the park, either. Most wildlife creatures that are found dead (or alive) with rat poison in their system have ingested four or five different varieties. But it’s a start.

RATS is currently planning an anti-poison publicity blitz around California, especially in areas where illegal pot farming has led to extensive use of rat poison. In more rural areas, mysterious epidemics among local wildlife, like coyotes and bobcats, often have their origins in rat poisons, to the point where wildlife rangers will try to catch ill-looking predators and give them massive doses of Vitamin K to counteract the effects.

Could we ever share our parks and cities with enough owls, hawks, and coyotes to deal with the rats that our presence draws? There’s a lot we have to learn — or relearn — when it comes to pests. The most compelling yard features for the new millennium — compost heaps and chicken coops — are like siren calls to fast-breeding rodents. For a good few decades, at least, humans were the only predator in town. Now comes the time when we figure out what it means to share space with killers that happen to be different species, and with different agendas.