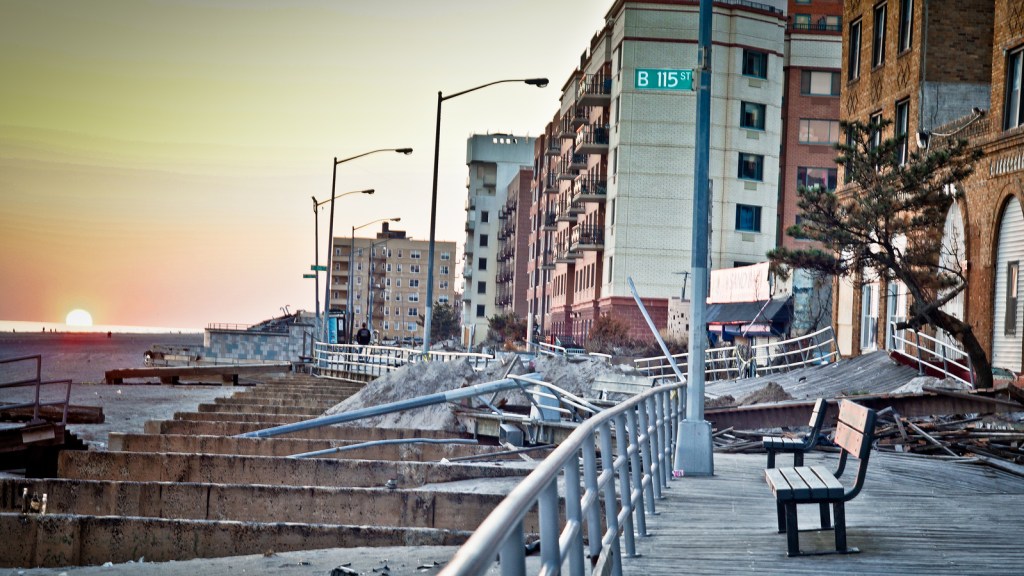 Even under the best-case scenarios for climate change, much of New York City will be under water in 100 years. The city would be smart to retreat from its waterfront, according to experts quoted in a recent alarming feature article in New York magazine.

But should the city really abandon its coastlines? And, given current political realities, how could it even do so?

The article, written by Andrew Rice, suggests that waterfront areas where new high-rise offices, apartment buildings, and parks are being developed — such as the far west side of Midtown Manhattan, Brooklyn’s Williamsburg, and Queens’ Long Island City — will be inundated and uninhabitable circa 2100.

The crucial point Rice makes is that temperature increases have been causing more sea-level rise than expected, thanks to the surprisingly rapid melting of polar ice sheets. That’s especially true on the East Coast, because of naturally sinking land and the Atlantic Ocean’s circulation patterns. As The New York Times recently reported, towns and cities along the Atlantic Coast are already battling regular flooding at high tide, from Hampton Roads, Virginia, to Miami Beach.

A mere 1.5 degrees Celsius of warming could mean 10 feet of sea-level rise, with about six feet of that coming by the end of this century. But we’re poised to blow past that level. Even if all countries fulfill the pledges made in the Paris climate agreement, we could be headed for a future of 3C of warming and 20 feet of sea-level rise. And if they don’t — a distinct possibility, as Paris has no enforcement mechanism — climate change and sea-level rise could be far worse.

In this context, Rice’s article explores the policy debate over whether New York City should prohibit development in waterfront areas that will be vulnerable in the latter half of this century. Currently, New York is setting zoning codes and taking other measures to accommodate a two-foot sea-level climb by 2050, which is an extremely optimistic estimate.

The star of the article is Klaus Jacob, a dour geophysicist from Columbia University who argues that the city should not allow new buildings to go up in areas that will likely have to be abandoned in 30 or 40 years. Jacob’s dramatic quotes make for good reading, and it’s hard to argue with him in the abstract.

But Jacob isn’t offering a realistic policy approach to the economic, social, and political challenges New York will face from sea-level rise and other aspects of climate change — and neither is anyone else.

New Yorkers aren’t about to back away from the water

People are drawn to the waterfront and the views it offers. Increasingly, they are also drawn to the historic houses, apartment buildings, factories, and warehouses that abut much of New York’s shoreline. Waterfront redevelopment is hardly unique to New York: It is a standard feature of reviving post-industrial cities like Boston and Pittsburgh. A city that doesn’t allow repurposing of older buildings and the construction of new ones will be at a competitive disadvantage against other cities without such scruples.

To prohibit development along the waterfront would choke off the expansion of the very things New York desperately needs in greater supply: housing and office space. Demand to be in New York is booming, the city is expecting to grow by 1 million residents by 2040, and housing and office rents are astronomical. If you want to see what happens when new development is blocked, look at San Francisco: The cost of office space there just passed Manhattan’s, becoming the country’s most expensive.

A ban on waterfront development would also be impossible politically: The real estate industry practically owns City Hall, through its campaign contributions and large economic footprint. While voters are notoriously skeptical of new construction, there’s generally widespread support for turning abandoned warehouses into lofts and putting parks paid for by new apartment buildings on rotting piers. Voters are attuned to what might harm their property values or quality of life next year, but not the high societal cost of bailing out unwise development projects a few decades down the line.

And it’s not just developers who are eying the prospects along the waterfront. New York’s progressive mayor, Bill de Blasio, is too. In what some would call a sop to developers, others a clever way to capitalize on demand for waterfront real estate to finance public transit, he wants to build a new trolley line that would connect the Brooklyn and Queens waterfronts. He would pay for it by borrowing against higher future property tax revenues. As the Village Voice points out in a feature article, the planned route runs right along the future floodplain. Environmental justice advocates argue that the project’s $2.5 billion price tag could instead be directed toward improved express bus service in those same neighborhoods and others that are underserved by the subway. Unlike rail tracks, buses can be driven to high ground during big storms and bus lines can be redistributed to follow population shifts.

While fully evacuating low-lying neighborhoods, such as Brooklyn’s Red Hook, may be currently impossible, perhaps the city shouldn’t actively encourage their development but instead nudge new residents and businesses toward neighborhoods that won’t be as climate-threatened. But Politico reported last week that real estate titans and their engineering consultants are already trying to figure out how Red Hook could receive a huge influx of new buildings and a new subway line that would go underwater to Manhattan. There was no mention in the article of how to climate-proof the new subway line and make it flood-resistant, but that promises to be a huge problem in the future for new and existing lines.

So then what do we do?

Making structures in flood zones more climate-resilient is the logical course for the immediate future. Both the New York and Village Voice articles raise a dilemma, though: What is the point of building elevated homes that will stay dry through high tides and storm surges when the streets that surround them will be under water?

Perhaps the answer is that we will have to reorient our cities to accommodate water rather than just retreating and trying to hold it back. European cities such as Amsterdam and Venice have used canals to manage water for centuries. A school of thought in the urban planning and architecture world holds that instead of choosing between expensive seawalls and total abandonment, we should strive for coexistence with the water. If we accept flooding as a fact of life, we could design our cities to absorb storm surges, collect the water, and then get rid of it as quickly as possible.

That may be necessary in part because people love living by water and are loathe to give it up. One of the hardest things about dealing with climate change is that much of the public just doesn’t want to change their way of life — even if they accept climate science. In a democracy, and a market economy, that’s a reality we’re going to have to work with.