The Ghost Ship fire is a reminder: We have to make our cities work for everyone 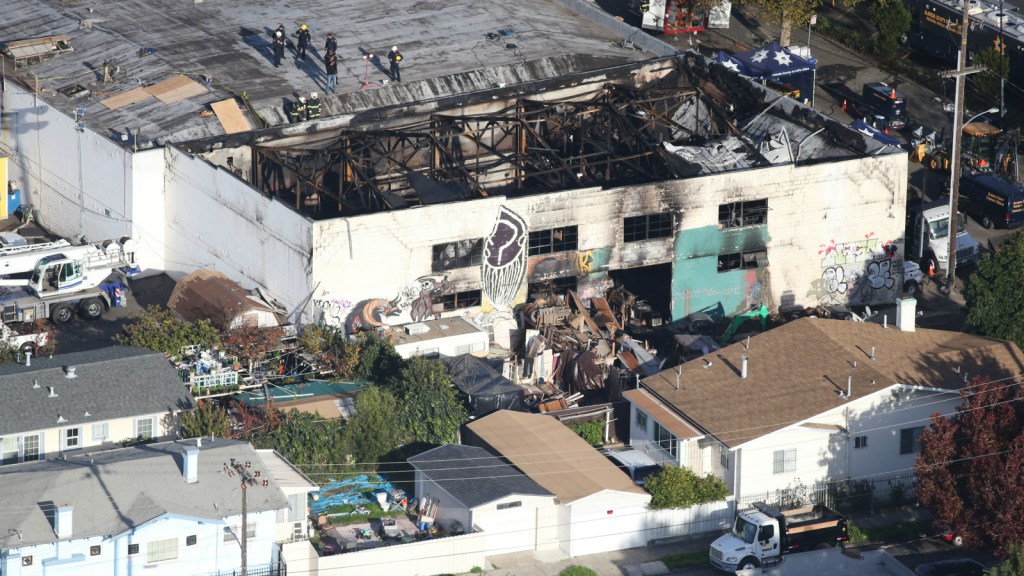 The Ghost Ship fire is a reminder: We have to make our cities work for everyone

Over a decade ago, a friend of mine moved into a warehouse in Oakland. The first time I saw it, the warehouse was an echoing, cavernous space, empty except for a few lonely trucks parked inside and a 1950s office chair rigged up so that it hung like a chandelier from the ceiling-mounted crane system. You could use the crane controls to hoist the chair into the air, with yourself sitting in it, and zip back and forth across the warehouse with alarming speed. Which I did. “Truly,” I thought, “This is what Oprah meant when she said, ‘Live your best life.’”

Soon, the warehouse was filled with shipping containers stacked on top of each other, and the containers were filled with thrifted furniture, tool benches, and, in one case, a full kitchen, although I think most residents lived off takeout and microwave dinners.

Outside, the neighborhood felt empty — just rows of blank industrial buildings, gated condominium complexes, and big box stores. The warehomes, though, were their own small cities filled with drama and romance and gossip and art (mostly bad, sometimes good). The days when a young, broke person could rent in a walkable neighborhood with things like parks and porches were long gone, so the warehouses became people’s neighborhoods.

When I heard about the Ghost Ship warehouse fire in Oakland last weekend, my first thought was of what a profound waste it was, of life and talent. My second thought was: We have to do better.

Our cities, which emptied out in the ’50s and ’60s, are turning back into densely populated metropolises. That’s good. But the ever-widening income gap in this country is pushing people at the bottom end of the income spectrum into the kind of risky living situations that haven’t been common since the tenement era. If we’re all going to be able to live in the city together, we’re going to have to accept unconventional housing and work to make it safer.

In San Francisco, tenants in illegal units can report safety violations to building inspectors without worrying that they’ll be immediately evicted (though being eventually evicted is still a distinct possibility). Oakland has no such system. New York City’s Loft Law offers even stronger protections — tenants can register illegal units in commercial buildings with the city in a way that grants them immunity from eviction and starts a process whereby they and the building’s owner work together to make the building safer to live in.

So far, the response to the Ghost Ship fire has been a wave of evictions, in Oakland and elsewhere. But just because the Ghost Ship building was dangerous doesn’t mean all other such buildings are. Several partygoers, former tenants, and neighbors had reported the building as unsafe or a fire hazard, but officials took no action. (Oakland has just six fire inspectors who are responsible for investigating more than 4,200 commercial and residential properties each year, and they’re focused on collecting as many fire inspection fees as possible, rather than carrying out detailed inspections — or so the firefighter’s union told Oakland Magazine.)

The warehouse that my friend lived in in Oakland had a few fires — the place was home to plenty of easily distractible people, welding equipment, and at least one remote-controlled robot with a flamethrower. What finally ended things was the candlelight photographer — she wandered off from a photo session in her shipping container, forgetting she’d left a candle burning. No one realized that her container was on fire until the ceiling caved in from the heat inside. The people in the building emptied out every fire extinguisher they had onto the container, knowing that if they called the fire department that would be the end of living there. And it was. When the firefighters arrived, they said a) this place is awesome and b) you know we’ve got to shut it down.

But back then, and even more so now, people living in warehouses were much more worried about eviction than about fire hazards. They did their best to stay safe under the constraints of the reality that they lived in, without involving any authority figures. “Friends don’t let friends build with pallet wood,” one of them told me. Another had a rule about never turning on the tempestuous industrial gas heater, which periodically shot sparks into the air, unless you were in the same room with it, watching it with both eyes.

It’s a mistake to assume that the lack of government oversight of the Ghost Ship is unique to the bohemian warehouse-dwelling scene. Last year, in San Francisco’s Mission District, an old three-story apartment and office building was destroyed by a four-alarm fire that killed one person, severely burned another, and left some 40 people without a place to live in the middle of a housing crisis. The building was worth millions, but it had no sprinkler system, bad electrical wiring, and fire alarms that, tenants said, never went off.

San Francisco had gotten so distracted with newness — new tech, new housing, new bike lanes, new ways of crunching city data — that somehow it had forgotten one of the most essential functions of city government: Don’t let the city catch on fire.

The fire escape outside my apartment window is a reminder that, in the wake of the horrific tenement fires of the late 18th century, the cities of the past figured out how to become safer places. We can do this too. It starts with making sure that residents of dangerous buildings can report safety concerns without worrying that they will lose their homes.