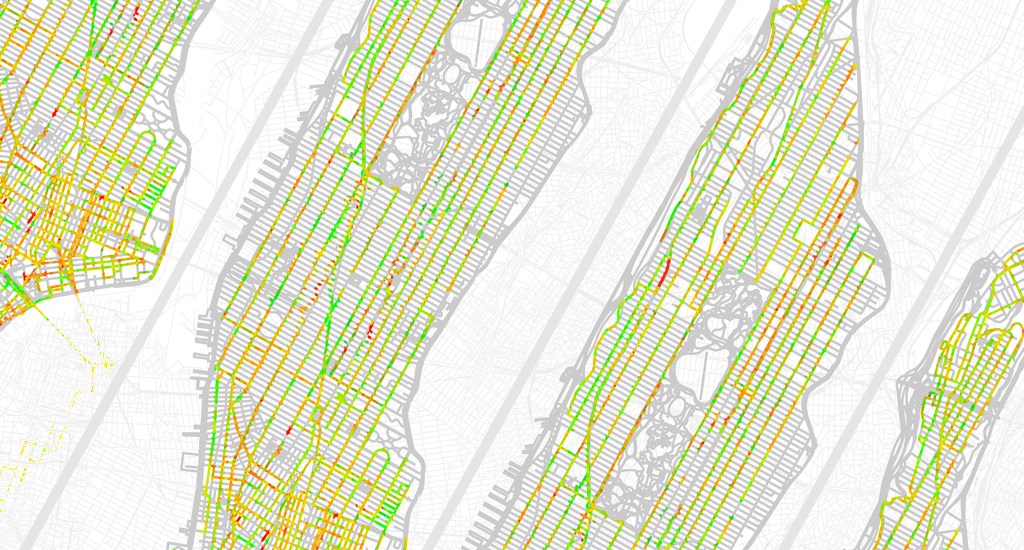 Riding a bike in the city is a little like being a gazelle on the lion-infested Sahel: You never know when some fanged beast is going to sneak up behind you and decide you’re lunch. It can be a rush — but it can also be terrifying, especially in spots where you have no option but to ride with car traffic.

That’s why I’m loving this experiment conducted by data visualization specialist Arlene Ducao, who tricked out a couple of bike helmets with brain sensors and sent volunteers to ride around Manhattan. Alex Davies at Wired explains:

The helmet is the MindRider, which Ducao helped develop as a grad student at MIT in 2010. The setup is simple: An off-the-shelf EEG brainwave sensor made by NeuroSky is built into a standard helmet. To make the map, eight riders spent September and October riding most of Manhattan (favoring north-south thoroughfares over east-west cross streets). Every second, the EEG sensor sends, via Bluetooth, data on the rider’s level of focus. Attention level rises when the user focuses on one thing (say, a car about to swerve into the bike lane), and decreases when they’re less focused. In other words, it provides an idea of where you’re totally stressed and when you’re chill. A riders’ level of attention was ranked from 0 to 100, then correlated onto a color scale, from green to yellow to red.

The result? A map of the friendliest and freakiest places to bike in NYC. Check it out. (The red zones are the places where bikers tense up, while in the green areas they’re relatively carefree.)

Ducao is quick to point out that this is not (yet) real science — just the results from a handful of folks riding around the city. But it’s an idea with a lot of potential. I’m imagining a map of Seattle, where I live, that shows a few green bike lanes leading into downtown, and then a mess of red where we have to dodge traffic, construction zones, bikes lanes that start and stop without notice (or logic), and even worse things to get to our places of work.

It would be a handy tool for new cyclists trying to navigate the mayhem. And who knows: With this type of detailed information available, maybe the city transportation department would take heed and pour a little more money into building a bike network that actually avoids red zones — or better yet, does away with them entirely. Test riders could help street planners figure out if their fancy-pants biking infrastructure is actually, y’know, working.

Anything to help cyclists get around without that nagging feeling that there’s something with big, nasty teeth, hiding just out of sight, waiting to pounce.