The newly opened play:groundNYC on New York City’s Governors Island is well-hidden. On my first visit, I couldn’t find it. The second time, armed with directions, I still had to ask a man doing construction work on a nearby building. Asked how to get to “the playground,” he looked momentarily confused and then warned me, “It’s more of a junkyard.” 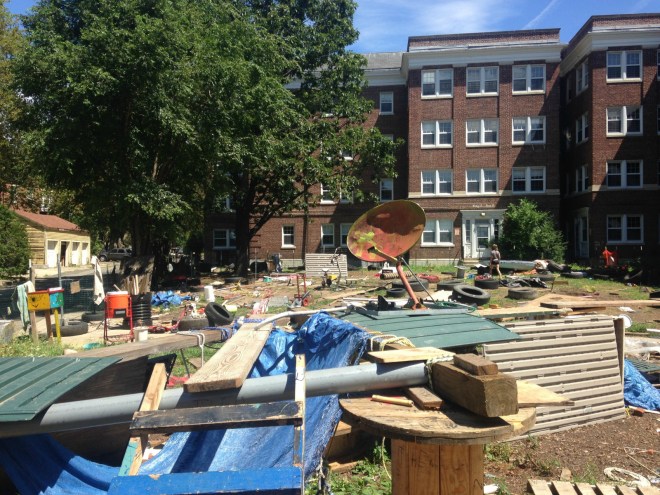 That’s precisely the point. This small field sandwiched between historic, disused military buildings is filled with the detritus of New York’s consumer culture, including, on my visit, tires, a plastic water cooler, pieces of wood in all sorts of sizes and shapes, a stroller, and a stationary exercise bike. It’s supposed to be like a junkyard. It is one of a small but growing cadre of “adventure playgrounds” that let kids imagine and build their own environments. 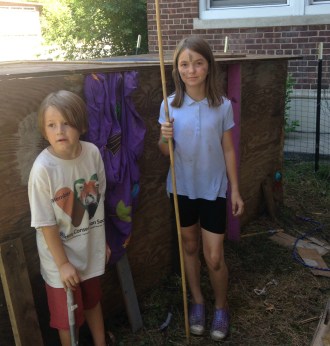 When I finally arrived, kids who were attending a summer camp there cornered me with sticks. I complimented one on her fearsome face paint. “It’s mud,” said Eva, age 9. She went on to show me the headstone they had devised for a worm they had adopted before it died, a wanted sign for its alleged murderer, camp co-director Morgan Leichter-Saxby, and the prison where Leichter-Saxby was held as punishment. Made from small, discarded plastic fences, like the baby gates used to keep toddlers away from staircases, it was transformed through children’s hands and imaginations into their own San Quentin.

This kind of rough-and-tumble, ingenuity-driven play is exactly what was hoped for when play:groundNYC was conceived in 2014 for children ages 6–13. (Children ages 3–5 are cordoned off in a junior, sharp stick–free mini-playground.) It was the brainchild of a small group of New York parents who were frustrated by the obsessively childproofed playgrounds that have become the norm in the United States. Once children played on abandoned rail tracks and in empty schoolyards and had to invent their own games, enduring the occasional scraped knee along the way, but today playgrounds in affluent neighborhoods feature soft rubber floors and jungle gyms designed to accommodate only their intended uses. Parents used to let elementary school–age kids play in the park with friends and siblings unsupervised, but they increasingly don’t let their progeny out of their sight until adolescence. In some suburbs, parents can actually have their 10-year-old taken away by the government if the child is allowed to walk to a park unaccompanied. 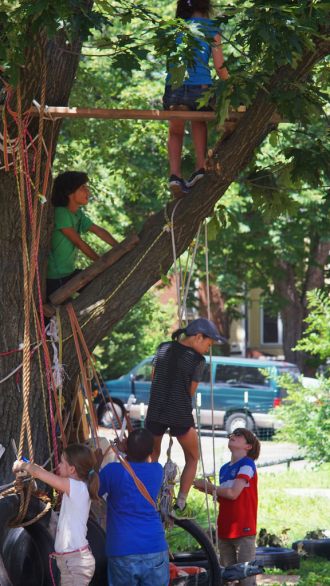 The adventure or “wild” playground movement has risen in response to this overprotectiveness. Its advocates argue that less adult supervision may be more developmentally rewarding for children. There are hundreds of adventure playgrounds in the world, most of them in Western Europe. (The concept was invented in Denmark in the 1930s.) There are about a half-dozen in the United States, with twice as many in the pipeline; numbers are imprecise because the definition of what exactly qualifies as an adventure playground varies. One that undoubtedly does qualify is Adventure Playground in Berkeley, California, a 37-year-old local landmark.

The movement is gaining attention through media coverage, such as a 2014 cover story in The Atlantic. It is also backed by a growing cadre of academics who study childhood development. Ellen Sandseter, a professor of early-childhood education at Queen Maud University College in Norway, published a paper in 2011, based on her observations and interviews on playgrounds, touting the “the anti-phobic effects of thrilling experiences” in children’s play. She found that children benefit from, if not actual danger, the feeling of danger and related sensations that result from activities like climbing up to get a bird’s-eye view, playing with dangerous tools, or exploring on their own. “Our fear of children being harmed may result in more fearful children and increased levels of psychopathology,” she writes.

That’s the animating philosophy behind play:groundNYC. “There are no parents allowed on the playground,” explains Jaclyn Katz, play:groundNYC’s board director. “There are playworkers instead that empower and encourage kids to do safely whatever they choose to do, which has been building incredible structures like tree houses and tire swings.” These playworkers are trained professionals, such as Leichter-Saxby, who facilitate children’s playing but don’t direct it. The treehouse has been removed by Governors Island park staff who were worried it might damage the tree. But in its stead a “fort” has arisen, accessible by ladder; it was assembled from wooden planks, ropes, and tarps, with minimal adult assistance. 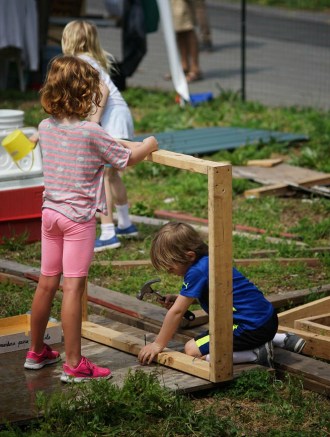 In this litigious age, parents do need to sign a release form before their children enter the playground. I was startled to see a saw just sitting out for children as to use. “There are sharper knives in every kitchen,” Leichter-Saxby notes. No one has been seriously injured at the playground in its few months of operation. “We get a few bumps and bruises,” she says, “but that’s just living in the world. I get bumps and bruises in my living room.”

On the day I visited, all of the kids at the day camp were white, raising questions about whether play:groundNYC is accessible enough to children of color and those from low-income communities. It’s closest to Lower Manhattan and Brooklyn Heights, two of the wealthiest, whitest neighborhoods in New York City, and much less convenient to poorer areas. And since it mainly draws visitors through word of mouth and the internet, it skews toward the more affluent, plugged-in parent. But Leichter-Saxby says it often attracts diverse crowds, and playground staff and volunteers have gone to lower-income, majority non-white neighborhoods to distribute information about the playground, which is free to visit, and the day camp, which offers some need-based scholarships.

To reach everyone, though, adventure playgrounds will need to be much more widespread throughout diverse neighborhoods and cities. Demonstrating that they can safely excite a child’s imagination is the first step. 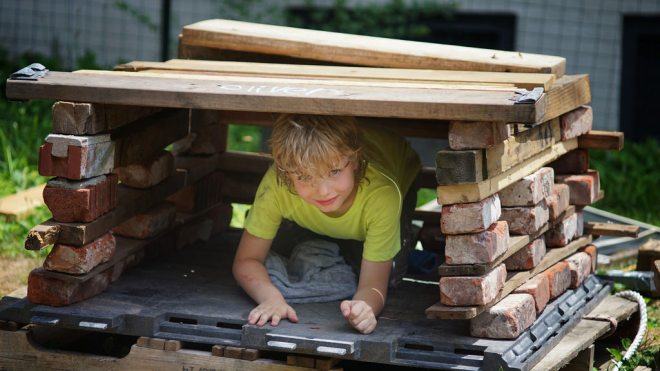