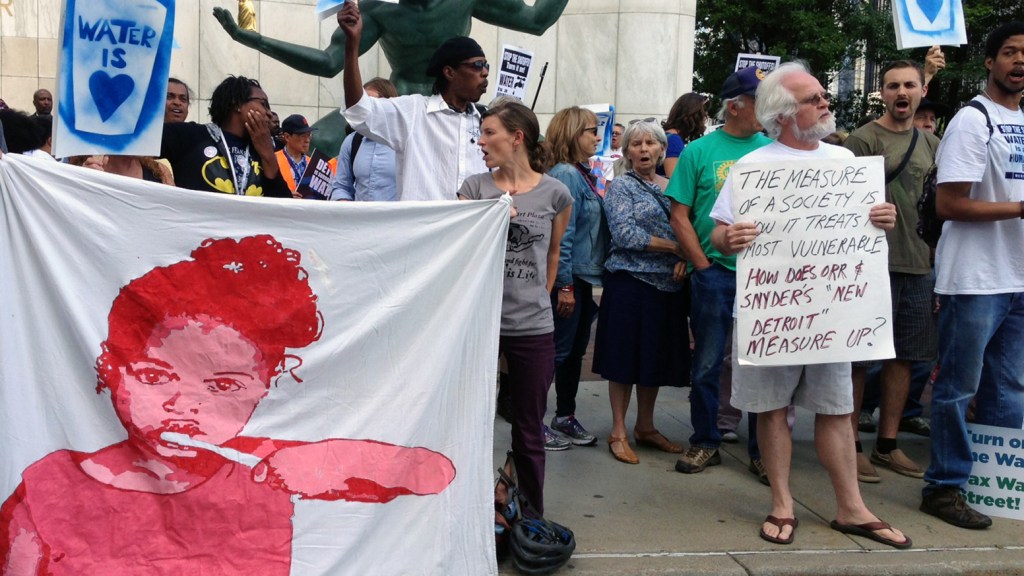 Detroit’s water situation is even stranger than we thought. According to documents obtained through a Freedom of Information Act (FOIA) request, the dramatic spike in water shutoffs to individual homes in Detroit that began in March of this year may have happened not because people failed to pay their bills but instead because the Detroit Water and Sewerage Department was trying to fix a colossal billing mistake that the utility made six years ago.

As the crisis has gone on, the DWSD has maintained that it is only getting tough with its most delinquent customers.. But documents obtained by Alice Jennings, a lawyer for the NAACP Legal Defense Fund, tell a different story — one where DWSD was going through what it describes as a “systems change,” and somehow forgot to bill one-third of the utility’s customers for sewage.

It’s unclear how the utility failed to notice that it was collecting $115 million less than it was supposed to be. But this scenario does explain why many customers didn’t notice that anything was wrong: they were still receiving bills — just not for sewage.

The retroactive billing also provides a plausible explanation for the stories that I heard from people in Detroit about receiving enormous water bills out of the blue for no apparent reason. According to the NAACP Legal Defense Fund, this year a Detroit church was billed $60,000 by the DWSD for water and sewage fees dating back to 1992. Similarly, Rosalyn Walker, a Detroit resident, got a $900 bill that she was told was her responsibility, even though she hadn’t lived in the house while the charges were incurred.

The documents were released as part of a class action lawsuit, Lyda et.al v. City of Detroit, which was filed with the help of the ACLU of Michigan and the NAACP Legal Defense Fund. If you’ve ever wanted to spend a lot of time reading about utility-law precedents, well, this is the lawsuit for you. The complaint is currently being handled as part of the city’s bankruptcy proceedings, and a hearing specifically about the shut-offs is scheduled for Wednesday, Sept. 17.

Among other things, the lawsuit argues that the DWSD broke its own rules when it began carrying out water shut-offs with no advance warning, by shutting off water to people who were actively disputing their bills, and by continuing to shut off water to homes even after the city supposedly had a shutoff moratorium in place. It also argues that shutting off water to homes in Detroit — while maintaining service at, for instance, two local golf courses that were hundreds of thousands of dollars behind in their water bills — amounts to discrimination on the basis of race and poverty. (The DWSD argues that its contractors didn’t have the technology to shut off water to large-scale commercial customers.)

Reading the documents, you might be struck by just how disorganized the DWSD seems. In June 2013, when one of the documents was written, it had only just been released from 35 years of court-appointed oversight. That began in 1977 after the EPA sued the department for discharging more pollution into Michigan’s waterways than its permit allowed. The DWSD’s board and senior management are almost entirely new; the staff is two thirds of its former size; and it is struggling to deliver water to a city of 685,000 residents though leaky old infrastructure built for a city with three times as many paying customers.  Its water system has had 5000 water main breaks in the last three years.

Some people wondered whether the court ruling that pulled the DWSD away from the watchful eye of the feds was just a preemptive move to sell the utility to a private company like the French water conglomerate Veolia. Instead, the DWSD has brought down the kind of national attention upon itself that a utility hasn’t seen since, arguably, Enron. Even the long-time activists that I interviewed in Detroit seemed mystified by the sudden attention.”I have done over fifty interviews,” said Maureen Taylor, of the Michigan Welfare Rights Organization, when I talked with her in Detroit.

Detroit residents already pay some of the highest rates in the country, and groups like the Michigan Welfare Rights Organization (MWRO) have been trying to work with the DWSD on setting up an income-based system for helping customers pay their water bills for over a decade now. (Several states, including Ohio, have income-based payment plans for utilities.).”One of the first mistakes I made,” said Taylor, about her experience working with DWSD “was — when everyone said, ‘I really agree with you and I want to work with you,’ I believed them.” With the help of Robert Coulton, a utilities specialist,  MWRO developed a plan that was widely praised, but never seemed to quite get implemented or funded.

The attention, and the lawsuit, might just change that.Not long after Taylor’s comment about interview fatigue, I heard her at a meeting, exhorting other groups working on the water crisis to keep on talking to the media. People needed to remember, she said, that this was not just a story about Detroit. This was about how people everywhere deserve access to water based on what they can afford to pay.