This green Tea Party star is fighting for solar 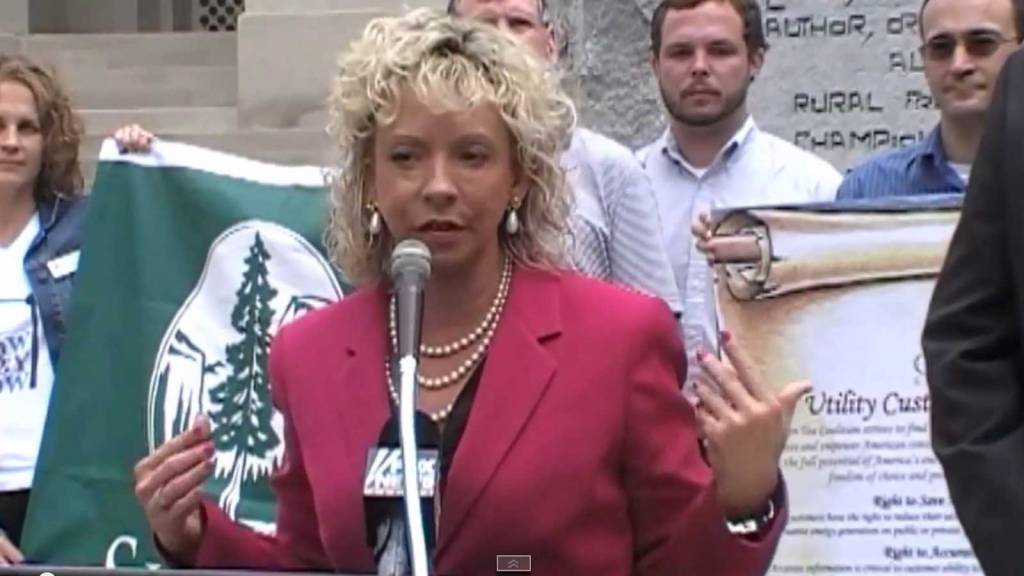 This green Tea Party star is fighting for solar

Debbie Dooley is not a tree-hugger — in fact she bills herself as a radical right-wing grandmother, and she is a founding member of the national Tea Party and a leader of the Atlanta Tea Party.

But Dooley is also an outspoken proponent of distributed solar generation and other forms of renewable distributed energy. As founder of the Green Tea Coalition, a conservation-minded wing of the Tea Party, she has made numerous media appearances on outlets across the political spectrum.

Q. How did you become interested in renewable energy?

A. I’ve been a political activist off and on since 1976. I was one of the 22 national founders of the Tea Party movement. I’m very active with the Atlanta Tea party, I serve on the board of directors of Tea Party Patriots, which has not and is not taking a position on solar.

I began to get interested in energy with a fight we were carrying on with Georgia Power. They’re a monopoly here in Georgia. They were not acting in the best interest of ratepayers in regards to some of their policies. They were building two nuclear reactors at Plant Vogtle, and the utility customers were paying for that in advance. There were massive cost overruns expected, and yet they were making a guaranteed profit on the cost of the two reactors and the cost overruns.

I began to take a closer look at energy for that reason. I’ve always been a free-market conservative. I began to realize a monopoly is not a free market, a monopoly violates free-market principles. Solar is a way to give monopolies very much needed competition. It also provides consumer choice.

I founded the Green Tea Coalition, and I recently founded in the past week Conservatives for Energy Freedom. That’s what I’m advocating for — energy freedom and energy independence.

Q. Have you been working directly on the issue of third-party-owned solar installations?

A. Yes, in Georgia we are trying to allow that. Georgia Power is giving us a fight on that. They want to control it. Solar empowers the consumer and the individual. These giant monopolies want to take away that consumer choice unless they can control it. They are looking at their profit margins, not the best interests of ratepayers.

This is about the freedom to choose and create your own electricity. I think [policies that inhibit third-party-owned solar] are a blatant attack by these giant monopolies who at every turn have to construct a power plant, and make a profit off the construction of the power plant.

[If] they have to buy some power from out of state, they pay fair market value — so why shouldn’t they buy their power from within the state and create jobs for Wisconsinites or whatever state they are in? If we open up the market for solar, there would be little need for them to have to construct more power plants.

The third-party solar that we’re talking about, it is really good for the consumer because that means you don’t have to go out and construct a power plant, it makes the fuel cost simpler, the utility companies are compensated for the time that solar customers pull power from the grid.

Q. Is it strange for you being so outspoken on this topic since solar and distributed generation advocates are usually seen as liberal or environmentalists?

A. A lot of companies with fossil fuel interests try to spin it that way. It’s totally ridiculous. If you can’t discredit the message, you go after the messenger.

When I started doing research and seeing what We Energies is trying to do in Wisconsin, I was appalled. Here you have a giant utility to trying to protect their profit margin by taxing the sun and taxing manure. You can call it whatever you want to, it is a tax. I think that is totally ridiculous.

Q. Do you think your support of solar has extra significance since you are a high-profile conservative activist?

Q. Do you have solar panels or would you like to get them?

A. I went through a divorce two years ago so I’m renting a house, but you can bet when I purchase a home it will have solar panels. You would be really surprised about conservatives, how many are asking me about solar panels. It empowers the individual and it’s good for the environment. To me conservation is conservative.

Q. How do you feel about wind energy, since much wind is generated by these large companies?

A. I would support wind energy as well, though wind does not empower the individual like solar does. You can put solar panels on your rooftop, as long as you have daylight and a battery you can power yourself. It’s harder for the individual to do that with wind.

I was at the gym yesterday, watching TV on the treadmill, looking at a report on the History Channel that talked about sugar cane in Hawaii that was used to generate electricity. Any way we can be energy independent, I’m all for it. An all-of-the-above approach.

Q. Does Republican opposition to taking action on climate change complicate your mission with this message?

A. It does. I don’t believe in excessive regulation, like all these regulations we’ve seen with EPA the past few years. I would prefer to allow energy to compete in the free market on a level playing field and let the consumer decide what is best.

I fully believe energies that hurt the environment should be taxed. I don’t believe in a carbon tax, I believe in a cleanup fund like with the BP spill in Gulf.

I’ve advocated from the beginning to cut out massive subsidies that all energy forms have received. Some of the same conservatives that point a finger at Solyndra, they failed to point out the massive subsidies coal and nuclear have been receiving since the 1930s. That smacks of hypocrisy. If you’re going to complain about subsidies for wind or solar, why are we still subsidizing nuclear and coal? Subsidies are government’s way of picking winners and losers.

Q. How have such statements been received when you talk to Tea Party or conservative audiences?

A. I talked at the Tea Party convention and said government should stop picking winners and losers. I got thunderous applause. People are really receptive to the right message when you lay the facts out.

I’ve been attacked by Koch brothers-affiliated groups. [Some] said I was a fake Tea Party person. I just laughed. I am a conservative. There is no way they can paint me as a liberal, even as a moderate — I am a right-wing conservative.

If he says, “I want to generate my own power and be self-sufficient,” I want him to have the ability to do it.