Remember that tunneling fustercluck we mentioned in December?

Here’s a refresher: A giant tunnel-boring machine nicknamed Bertha has been stuck under downtown Seattle for more than a year, delaying a $2 billion effort to replace the crumbling Alaskan Way Viaduct, which carries State Highway 99 along the city’s waterfront. The project was scheduled to be completed later this year, but Bertha has only tunneled about 1,000 feet of its planned 1.7 miles.

Well, the failing project has become a sort of running joke here in Seattle. This week, a group under the guise of the Seattle Department of Vision and Progress launched Born Again Bertha, a tongue-in-cheek proposal to repurpose the unfinished tunnel.

The group debuted official-looking “Notice of Proposed Land Use Action” signs yesterday in Pioneer Square, near the tunnel entrance, detailing the many amenities that could be installed in Bertha’s hole. Some highlights: Mike McGinn Elementary and Middle Schools, named for the former Seattle mayor who fought the tunnel, Apolo Ohno Sports Center, named for this guy, and a community tennis center (built on a foundation of dirt excavated from construction projects on fast-gentrifying Capitol Hill, natch). The plan even envisions some environmental breakthroughs under the leadership of President Jeb Bush! What could go wrong?? 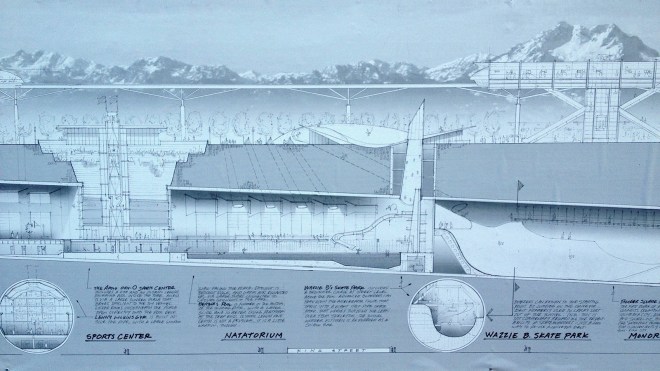 Some of the faux-schematics of the Born Again Bertha plan.Chas Redmond

The parody plan even has its own Twitter account and is gaining some steam. Some folks are applauding the group’s proposal and crossing their fingers for the tunnel-boring machine’s actual demise, while others are just scratching their heads.

Some choice Tweets from fans and passersby:

@SeattleMaven is it wrong that I want the tunnel project to fail just so I can see this in Seattle? http://t.co/08F7r1yfi0 @BornAgainBertha

Don't know if this is for real or some fantastical steampunk / futuristic pipe dream, but it sounds really cool – http://t.co/e8aJxzzpLn

In the real world, Bertha is causing a laundry-list of worries. Drivers are wondering if the viaduct is even safe to drive on because it’s slowly sinking. So is a whole chunk of downtown that sits atop the tunnel, including, gulp, our offices. Before we know it, Grist HQ could have some new underground digs, too. Meanwhile, traffic in Downtown Seattle still sucks.

But props to the Born Again Bertha brigade for looking at the bright side. This may, in fact, be the road to nowhere, but if so, we can at least look forward to some rock climbing or speed-skating in the sports center at lunchtime!

No, Obama did not veto the Keystone XL pipeline