Why Baltimore is fighting for its life, again 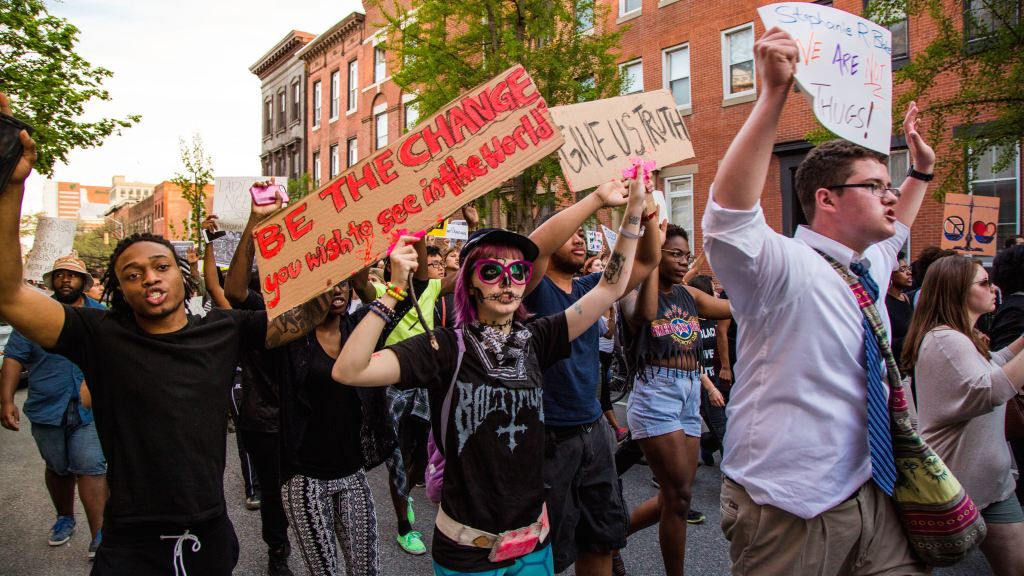 Why Baltimore is fighting for its life, again

Baltimore is a city of many slogans, a reflection not only of its citizens’ fondness toward their often-troubled hometown, but also of the serial rebranding efforts those troubles spawned. Most famously, in 2000 the then-new Mayor Martin O’Malley painted over bus-stop benches with the lunatic boast “The Greatest City in America,” which still inspires mockery. But two nicknames have stuck.

In the early 1970s, after rioting and white flight battered the city’s image, civic boosters proclaimed Baltimore “Charm City USA.” Improbably, it worked — the phrase fit our modest ambitions and well-earned reputation as an enclave of oddballs, and it has since insinuated itself into much of the metro area’s commercial signage.

Charm City even managed to supplant a nickname born of earlier unrest — Mobtown, coined when brawling political gangs roamed the streets in the early 19th century. Confederate sympathizers battled Federal troops here in the opening moments of the Civil War, and Baltimore’s lawless proclivities made national news, not for the last time. Today, Mobtown lends its swagger to underground theater companies and craft beers.

In the midst of yet another cycle of unrest, it’s tempting to read more into the yin and yang of these competing visions. An overfamiliar-but-useful narrative locally is the concept of the “two Baltimores” — riven by race, class, and shrinking economic opportunity, coexisting in a state of mutual incomprehension astride an angry blue line of militarized cops. Urban America is full of variations on this story, of course, but Baltimore is blessed with particularly rich material and great storytellers: This is the stuff of David Simon’s The Wire and Ta-Nehisi Coates’ nonfiction.

For several years, I edited a now-defunct city magazine called Urbanite that also tried to tell the two-Baltimores story. We looked for ways to bridge that divide, or at least talk about what a bridge might look like, if it existed. We’d seize on scraps of hopeful news — an uptick in public school scores, a promising anti-violence program, a renovated building in a bombed-out neighborhood, a single street that managed to appear placidly integrated — and inspect it for signs of scalability.

Postwar deindustrialization had left Baltimore with a garish constellation of woes, but it wasn’t broken: It still had major universities and medical institutions, a robust nonprofit base, positive demographic trends, and, most important, a we’ll-try-anything commitment to urban experimentation that encouraged all manner of innovative, if often futile, renewal efforts. The ethos was: We can fix this.

Baltimore had good bones. If you squinted a bit, you could see what it might look like.

As scattered rioting played out around the city these last few days, news cameras revisited the scenes of many of those efforts. An unfinished senior center was set aflame in a neighborhood just north of Johns Hopkins University’s medical campus, site of a hugely controversial redevelopment project that promises future jobs but also displaced low-income residents. Mondawmin Mall, a pioneering shopping center and the scene of much televised B-roll mayhem, was spiffed up recently and had been doggedly bucking the urban-mall death spiral. (It’s got a Target!)

And in the life of Freddie Gray, the 25-year-old man whose death at the hands of police sparked the current unrest, you can see a dispiriting catalog of modern Baltimore’s structural challenges: Gray was born to a heroin-addicted mother and raised in a house laced with lead paint in a desperately poor neighborhood called Sandtown-Winchester, a kind of ground-zero of the mass-incarceration society (it’s part of a census tract with the largest number of Maryland residents in state prison). While he was growing up here, Gray’s community devoured $130 million in private and public funds, an audacious, all-hands rescue effort whose epic failure haunts other schemes to pump investment into similarly blighted corners of the city.

But, amazingly, those schemes just keep on coming. Baltimore’s Mobtownian dysfunction and chronic inability to get its shit together are balanced by its refusal to stop trying. This is a town that has been MacGyvering last-minute ways to save its skin since the British sailed away in 1814. And, as Baltimoreans now remind themselves and the wider world, we have success stories: streets and parks and whole neighborhoods wrested back from the brink because of the combined efforts of people of every race who didn’t entirely swallow the two-Baltimores narrative.

In certain ways — if you squint a bit — the city is cleaner, healthier, and more congenial to diverse kinds of residents than it’s been since … who knows? The cultural scene is thriving. Long-dormant districts hum with life. There’s an adorable chef-owned boîte in a bar I used to get punched in. The penguins at the Maryland Zoo have an amazing new exhibit. We’ll be OK. We can fix this.

I ride to work every morning along an honest-to-God bicycle path — unimaginable here two decades ago — along a stream valley that, abandoned by industry, now hosts herons and condos. On perfect spring days like these, before the heat clamps down and even the scruffy neighborhoods are littered in dogwood blooms, the city reaches Peak Charm, and you can see why those who fall for it now fight to save it from itself. In the wake of the rioting, social-media feeds have filled with paeans to the street heroism of residents who faced down looters, swept up broken glass, and told off cable-news dingbats. These are the scraps of hope we seize on.

A trending unofficial civic slogan declares “Baltimore: Actually, I Like It,” which best captures the mix of resignation and defensiveness that comes from residing in a place long synonymous with what’s wrong with American cities. This may never be a Portlandia-style urban playground, but the raggedy pleasures of Baltimore living are real and durable, and can be found no where else. That’s why we’re here, and why we stay, even though sometimes we all feel like tearing the place down.