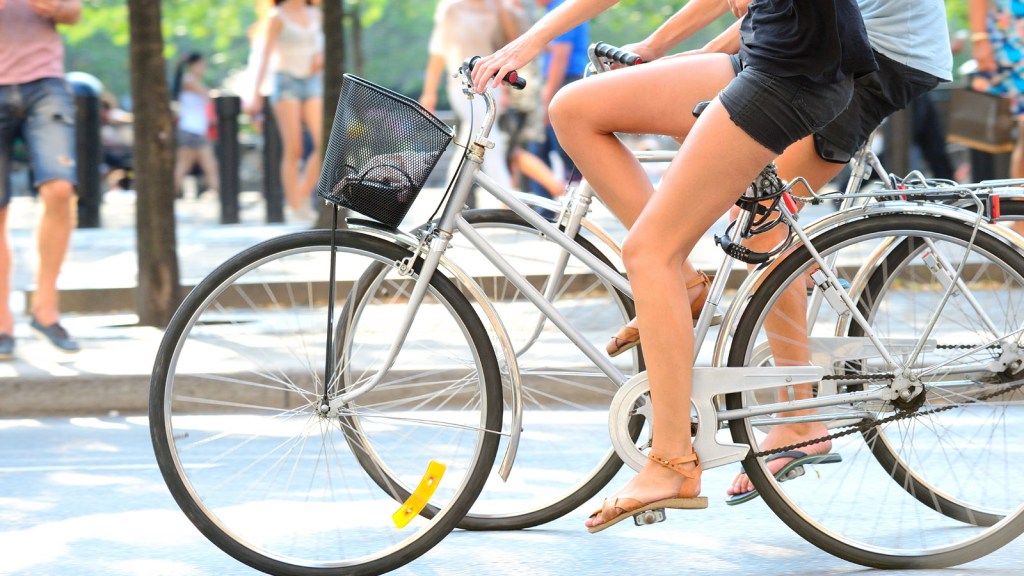 Shutterstock
Don't pull out all the stops

Why bikers should live by the same laws as everyone else

All of us who ride bikes know the feeling of not wanting to stop completely at an intersection when there’s no one coming. It’s an understandable impulse. Far more often, though, I’ve been legally walking across a street and had a bike roll through the crosswalk, forcing me to freeze in mid-intersection as it breaks the law and crosses my path. Sometimes, it zips frighteningly close.

But some cycling advocates argue that we should make it legal for bikes to go through a red light, after stopping to check that there are no oncoming cars and pedestrians. This is called the “Idaho stop.” Legal only in Idaho and a few towns in Colorado, it also allows bikes to roll slowly through stop signs, treating them essentially as yield signs.

The idea has been picking up steam for the last few years in local blogs from San Francisco to New York, thanks partly to this oddly popular video. In a recent, widely read article in Vox, Joseph Stromberg compellingly laid out the case, drawing on the authority of physics: “So many cyclists do these things … because they make sense, in terms of the energy expended by a cyclist as he or she rides. Unlike a car, getting a bike started from a standstill requires a lot of energy from the rider. Once it’s going, the bike’s own momentum carries it forward, so it requires much less energy.” (Of course, if we made traffic laws primarily about physical efficiency instead of safety, we’d all be roadkill.)

Jeff Miller, president of the Alliance for Biking & Walking, argues that because bicyclists can more easily see and hear pedestrians than drivers can, rules designed for cars should not necessarily apply to bikes. “We don’t perceive any concern or threat on the part of pedestrians” from the Idaho stop, he says.

But bicycle advocacy groups are split on the issue. Miller’s coalition has not taken a position on the Idaho stop; many of its member organizations support it, but other leading cycling organizations don’t.

Even if the Idaho stop is good for bike riders, it’s not good for cities.

Advocates never put it in these terms, but Idaho stops essentially allow bikers to impose on pedestrians’ green lights and rights-of-way. Bikers would be prohibited from going if a pedestrian is in the intersection, but if a biker gets there first, a pedestrian would have to wait at the corner until the bike passes, possibly running out of time to cross. Do we really want to create a mad dash to be first at an intersection and claim right-of-way? As our population ages, and empty nesters return to cities, this would have a particularly negative effect on the elderly.

Idaho stops favor bikes instead human beings on two feet. But pedestrians are the lifeblood of a vibrant city.

Traffic lights and signs are how we organize urban movement, so that it can proceed safely. If we were going to exempt one group from these rules, the logical one would be pedestrians, who are the least dangerous group to other users, not people going much faster on metal contraptions. No pedestrian has ever killed a bicyclist by running into him, but the opposite does happen.

Stromberg invokes pedestrians to make his argument, writing, “Like bikes, pedestrians don’t need to come to a complete stop to avoid accidents at intersections, which is why you don’t see them weirdly freezing in place when they arrive at one.” You don’t? I see them do it, and I do it myself, every time I walk to a corner with a red light or stop sign. Even hordes of reveling Seahawks fans weirdly freeze in place at intersections.

Pedestrians cannot legally jaywalk, and responsible parents still teach their kids not to. Of course people do, and they rarely get ticketed.

And that provides a good model for bikes. Idaho stops, like jaywalking, should not be legalized; they should be winked at, with the law going unenforced except in truly egregious cases. Insofar as Idaho-stop advocates are complaining that police ticket cyclists for running lights when no one is coming, their complaint is valid. Enforcement efforts should be targeted at the worst traffic offenders, which are mostly cars because they are much bigger, faster, and more dangerous than bikes, and their behavior is often just as bad. In New York City, for example, cars routinely block the crosswalk, making street crossings unsafe for pedestrians.

But officially allowing bikes to steal a pedestrian’s right-of-way would go too far. It might encourage even worse behavior: If most people, using any mode of transportation, will tend to go a little further than the law allows, looser laws would make cyclists more inclined than they are already to blow through reds without stopping and through stop signs without slowing down.

Indeed, some prominent urban bicycle advocacy organizations, which are already battling cyclists’ outlaw image, don’t think it would be helpful to legalize the Idaho stop. “Bike Minnesota does not agree that bicyclists should be able to roll through stop signs. It would especially be a problem in cities,” says Dorian Grilley, executive director at the Bicycle Alliance of Minnesota. “There is plenty of data out there that shows that bicyclists are regarded as scofflaws. That is a reputation BikeMN is working to change.”

Transportation Alternatives (TA), the leading bicycle and pedestrian advocacy group in New York City, agrees. “In New York City, the reality is that our intersections are the where the majority of crashes occur,” says Caroline Samponaro, TA’s senior director of campaigns and organizing. “Signals, and people obeying them, is how we can create predictability and work together to make sure that everyone is safe. We think that everyone should obey the signals.”

And enforcement of the Idaho-stop rule would be difficult. Imagine the arguments over whether a pedestrian, car, or other bike was or wasn’t already crossing the street before the biker started doing so. “Education and interpretation would be challenging with the Idaho law,” says Grilley.

There is a larger point at issue: the mistaken focus on easing the movement of bicycles even at the expense of pedestrians. Biking is a good and important part of urban transportation. But, in any major city, there are vastly more trips made on foot than by bike. (Just look at the commuting mode share in Boston, New York, and Washington, D.C.) Many people — the elderly, the disabled, small children, shoppers carrying large items, the drunk, the desperately poor, people who need to wear business suits, people who hate getting sweaty — will always walk instead of bike. Their needs must be accommodated, because walking and public transit can be a backup option for bikers, but biking is not always an option for pedestrians.

Foot traffic is also the most crucial ingredient in a vibrant city streetscape. Street peddlers selling used records, carts selling food, window displays, break dancers, politicians shaking hands — they are all there to interact primarily with pedestrians, not cyclists. There’s a reason some of the world’s greatest outdoor public spaces are “pedestrianized,” not “bicyclized,” streets: closing a street to cars, and bikes, and letting pedestrians fill it, allows people to safely stand around, say, watching street performers or browsing shopping stalls.

As Felix Salmon, an avid biker himself, once noted in a Reuters column, some of the world’s best cities for both biking and walking, such as Amsterdam and Copenhagen, expect bikers to obey red lights and stop signs.

It’s not coincidental that the Idaho stop was invented in Idaho and hasn’t taken off in many other places. Idaho is one of the lowest-density states in the U.S. In parts of Idaho, biking may often be the main alternative to driving because distances are too great for walking to be practical. And it may be quite rare that pedestrians must stop at the corner to let a bike pass. This would be very different in America’s great cities, where biking is growing in popularity.

None of this is an argument against the other accommodations for cyclists that we all know and love, such as protected bike lanes, public bike racks, and bike-share programs. In all of those cases, helping bikers and helping pedestrians go hand-in-hand, as people can more easily shift between walking and biking, and the traffic-calming effect makes streets safer to walk as well as bike. That’s why groups like TA support all of those measures, and more. It’s only when the two groups’ interests collide that we need to remember which is more essential to urban mobility and the urban experience.

In the 20th century, America made an epic mistake: We retrofitted our roads to accommodate machines instead of people. Let’s not make the same mistake again.