I had been biking around Minneapolis for several days before I realized what was missing. It was a pleasant city, even though I was lost a lot, because most of the bike routes have very tiny signs that are hard to read, if they have signs at all. At night the bike paths were so dark that I worried I might not see an obstacle in the road, even with my headlight on, and I got even more lost, until I just gave up and biked very slowly with my phone in one hand, watching the blue dot that was myself on the map to make sure that I didn’t drift off the path, fall off my bike, and get eaten by bears. Not that there are any bears in Minneapolis.

But none of that mattered, really. Here was the thing that was missing for the first time since I became a bicycle commuter: fear.

I wasn’t listening for cars behind me. I wasn’t listening for the sound of a car-door latch, which might mean that I was about to get doored. I wasn’t watching cars up ahead for signs that they weren’t paying attention to what they were doing. One of my closest calls as a cyclist happened when a Snap On Tools truck drifted into the bike lane early in the morning. “Oh sorry!” yelled the driver out his window, when he realized he had almost run me over. “I didn’t see you!”

“That’s not good enough,” I yelled back, politely. “You have to pay attention.”

In Minneapolis, none of this was happening. Except for a few minutes at the beginning and end of every trip, there were were no cars around me at all. I had been transported to a magical land of cyclists and pedestrians. 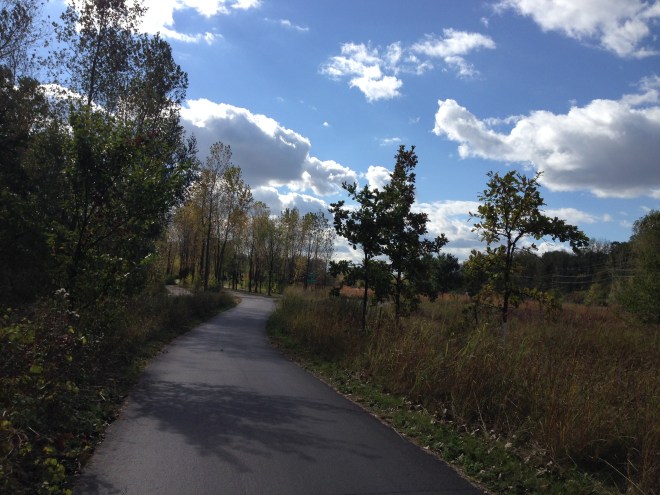 How did this happen? Minneapolis is unusual, as cities go, because it has a funny-shaped park system called the Grand Rounds Scenic Byway that encircles most of the city like a ring road. The Grand Rounds had a network of entirely separate paths for cars and pedestrians that dated back to the WPA era, but in the mid ’90s, Minneapolis began to lay down new paths for cyclists, too. These paths were mostly recreational until, in the last decade, Minneapolis began to draw lines between different points on that circle by converting old railroad infrastructure, like the Midtown Greenway, for pedestrians and cyclists, and connecting them to the city itself.

Cities like New York and San Francisco have added bike routes to the grid of regular street traffic, but if you look at the map of what Minneapolis is doing, it becomes clear that something entirely different is happening: Minneapolis is building a freeway system for bikes. But a nice one — a freeway where you can bike past flocks of geese rising off the lake in the morning and never have to breathe truck exhaust. 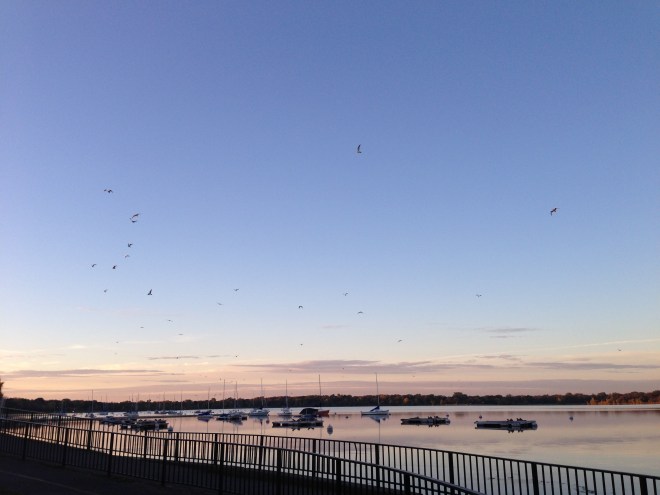 How did this come to pass? How has tiny Minneapolis, where the weather is brutal and nearly everyone has a car, manage to pull this off and to be consistently up there in the top few cities for cyclists? Below, a few theories.

In the past, Minneapolis had them, and how. In 2008, Minneapolis became one of four locales (Sheboygan County in Wisconsin, Marin County in California, and Columbia, Missouri were the other three) chosen for the Non-Motorized Transportation Pilot Program (NMTPP) — a four-year study exploring whether, if you give cities money for biking, the people in those cities will bike more (turns out they do). Each city got $25 million each, and Minneapolis used its to add 75 miles of new bike lanes and trails.

New York managed to build out its network for about $8.8 million spread out over several years — but 80 percent of that was matching funds that they managed to get from the feds. According to Jeanette Sadik-Khan, who presided over the city’s expansion of bike services, the city has spent less than $2 million from its own coffers.

Portland has been working with even less than that — about $2 million for pedestrian and cycling infrastructure combined, which is why it focused on cheap ways to adapt the existing street grid, instead of putting in special bike paths. Last year, Portland cut this budget in half when its Bureau of Transportation freaked out over other cost overruns. That’s pretty typical for city transportation budgets: Even where the amount set aside for cycling amounts to basically a rounding error, when potholes need to get filled, that money tends to disappear.

In the same way that Oregon has the bike-happy Earl Blumenauer (D-Ore.), until 2010, Minnesota had Rep. Jim Oberstar (D-Minn.) Oberstar managed to stay in office for 18 terms, all the while serving on (and sometimes chairing) the federal Transportation and Infrastructure Committee. Depending on who you talk to, Oberstar was either the kind of guy who knew how to make money rain down on his home state and his favorite projects, or a a guy who had more than a passing familiarity with earmarks and pork-barrel politics.

A fair amount of that pork went to bicycling because Oberstar was that great rarity — a politician who was a regular cyclist. When Oberstar died earlier this year, his fondness for cycling was barely mentioned in the national papers, but obituaries went up all over the transportation blogs. Julie Kosbab, a transportation advocate in Minnesota, remembered him this way:

He had calves, serious calf muscles, despite his age and despite his profession (which involves a lot of sitting and bloviating). He averaged 2000 miles on a bike a year and had been the victim of a car-bike collision. He knew what it’s like for a biker on the streets, on trails, by day and by night.

He’d taken up bicycling as a response to grief after the death of his first wife, and converted members of his staff to bike commuters. He co-authored, sponsored and helped pass the milestone SAFETEA-LU legislation in 2005. SAFETEA-LU provided not only for bridges and roads, but for public transportation support and alternative transportation. It was the launchpad for Safe Routes to Schools, a program intended to support and encourage kids to again walk and ride to school.

There is almost no arguing that without his influence, Minneapolis would not have more than 11 percent bike/ped mode share. Minneapolis was the feature city in the NMTPP because the program was Oberstar’s brainchild and baby, and despite Minneapolis not being in his district (he served in MN-8, which is the Iron Range), he procured the $25 million for Minneapolis.

On one of my bike rides in Minneapolis, I wound up at a very small, very campy local history museum called the Mill City Museum, which was right by the St. Anthony Falls.

The St. Anthony Falls are, basically, the reason that Minneapolis and St. Paul exist. They were the only natural major waterfall on the Upper Mississippi River, and so to anyone with a sense of how the mill business worked, they were essentially a tumbling torrent of dollar signs. Beginning in the 1860s they were heavily modified so that they could provide reliable energy to the flour mills that were being built up on both sides of the river.

Those mills weren’t just there to keep Minneapolis in dinner rolls. The city was the spot where all of the wheat grown in the newly-agricultural Central Plains was sent to be milled before being shipped eastward. The Twin Cities became a hub of different railroad networks, all trying to get in on the lucrative cross-continental trade. The railroads were not exactly fiscally stable enterprises. They crashed in the 1890s, and pretty much took the U.S. economy down with them, and they crashed again in the 1930s, when the Dust Bowl made it clear why no one had been growing crops in the Central Plains before.

All of which left Minneapolis lousy with railroads that it didn’t need anymore — in the same way that a lot of cities looked around after the financial collapse of 2008 and wondered what they were going to do with all of these luxury condos. The husks of those railroads form the basis of most of Minneapolis’ bike trails. The Midtown Greenway, which cuts conveniently through the center city, was built for the long-defunct Milwaukee Road Railroad. The Cedar Lake trail runs through old railyards for the Great Northern Railway and the Minneapolis and St. Louis Railway.

(A strange addendum to this is that the fracking boom in North Dakota has made Minneapolis into a transportation hub again — but this time for oil-by-rail. Minnesota is crossed by 50 oil trains a week, and BNSF is spending $95 million expanding its rail capacity across the state.)

There’s nothing wrong with being beautiful

Not everyone thinks that building bicycle freeways is a great idea. Freeways for bikes, like freeways for cars, cut people off from the regular street grid, which means that having a cyclist population may not help small businesses in Minneapolis the way that it has in cities like Portland. Portland has constructed its greenways in a more low-budget way — modifying residential streets so that they aren’t entirely closed to cars, but so that bicyclists have priority, and everything moves more or less at bicycle speed. Portland managed to have zero bike fatalities in recent years. Minneapolis has no such luck.

Meanwhile, battles have been fought along Minneapolis’s Midtown Greenway over “unsightly high-voltage lines.” Activists have struggled with developers along the greenway’s route, to persuade them to build in a way that presents an attractive façade to pedestrians and bikers going by.

If anything, the closest analogy to what Minneapolis is doing with its bike paths is what Frederick Law Olmsted and Calvert Vaux did with New York’s Central Park. Olmsted and Vaux were all about making the park as attractive as possible, but they were also obsessed with traffic flow. They designed a system of separate pathways for pedestrians, equestrian riders, and carriages (the sections designed for fast-moving traffic were later converted for use by cars). The goal was to make a space where every type of visitor could have their own path: Wanderers could wander, commuters could commute. Olmsted, in particular, was not humble about his plans what he was going for. It would be, in his words, “the first real Park made in this country — a democratic development of the highest significance.”

Americans tend to be uneasy about beautiful things. The idea of actually building out a beautiful commute in one of our cities is almost unheard of. But it is possible. Minneapolis has it down, and Olmsted and Vaux would be proud.

Car batteries may soon last 1,000 years thanks to pine and alfalfa