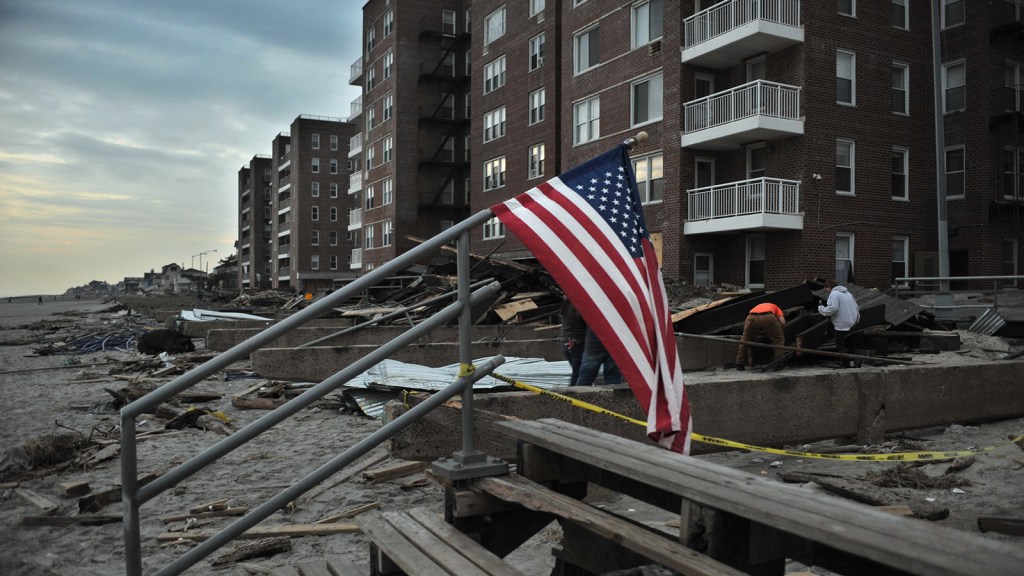 Superstorm Sandy struck the Northeast two years ago this week, killing more than 150 people. It caused an estimated $65 billion worth of damage; more than 650,000 homes were damaged or destroyed. Sandy’s powerful winds plus its sheer size — it extended 500 miles from its center — caused record storm surges, flooding, and power outages that affected as many as 8.5 million people in 21 states.

What was then a widely felt, fast-moving catastrophe has become a slow-moving effort to rebuild. Two years later, the region is still struggling to funnel funds to those who need it most. While there has been notable progress in restoring damaged beaches and boardwalks along the New Jersey shore and in New York’s Rockaways, many homeowners and small businesses are still trying to get back on their feet.

Here are five things that remain far from fixed:

1. Only 1 in 5 people say their communities are getting back to normal.

Overall, while the worst of the damage has been dealt with, a recent Associated Press-NORD Center for Public Affairs Research survey of 12 communities hit by Sandy found that around 22 percent of respondents say their areas are only partially back to normal. Five percent say their neighborhoods have barely recovered at all.

The survey also revealed the impact on the personal finances of people living in New York and New Jersey, which will last years beyond the storm: Nearly a quarter say they have postponed saving money for retirement or a child’s education. The same percentage say they put off making a major purchase such as a house, car, or major appliance.

In the aftermath of Superstorm Sandy, the city of New York launched “Build It Back,” a program to facilitate the rebuilding of destroyed or damaged houses and cover out-of-pocket expenses for homeowners and businesses incurred because of the storm. But the agency responsible for dishing out the money has been mired in delays and inefficiencies.

Perhaps most revealing aspect of the report is its finding that approximately 10,000 applicants “remain mired in BIB’s early stages and have yet to sign a benefit agreement.” As of April, only nine homes were undergoing work and none had been finished, according to the Associated Press. But the pace has quickened after Mayor Bill de Blasio pledged to resuscitate the stalled program. Now, according to NYC’s recovery website, construction has started on 727 homes, nearly 150 have been fully repaired, and 878 reimbursement checks have gone out.

The mayor has been touring affected areas to tout his administration’s new target: 1,000 construction starts and 1,500 reimbursement checks by the end of the year. “There is still a lot of work to get done, but my understanding from on the ground is that the application process is going faster, is going smoother,” Susannah Dyen, coordinator for the Alliance for a Just Rebuilding, told the Wall Street Journal.

3. Federal loans to small business owners have been delayed.

According to the federal Government Accountability Office, the Small Business Administration took roughly twice as long as intended to approve disaster loans to home and business owners. A GAO report released last week found that applications for loans to cover property damage took an average of 45 days to process; the SBA had said it would only take 21 days.

A little more than 40 percent of business owners who have applied for SBA loans have received one — a lower rate of approval than for victims of Hurricane Katrina. That’s led Rep. Nydia M. Velázquez (D-N.Y.) to call for Congress to reopen SBA’s disaster program so small businesses get another shot at applying for help.

The GAO also said the agency is ill-prepared for future disasters: “As a result, SBA risks continuing to be unprepared for a large number of disaster loan applications to be submitted at the beginning of a disaster response.”

Art News estimates total insured losses caused by Sandy to the New York City art world was around $200-$300 million, which has resulted in higher insurance deductibles and premiums. Last week, the New York Observer published a story about Chelsea art dealers facing pricey relocations and mounting insurance costs. Nicholas Reynolds, vice president of the art insurer Berkley Asset Protection, told the paper that “premiums have gone up for all galleries, but most of all for ground-floor galleries in Chelsea, 20, 25 or 30 percent,” and that “no one is providing flood insurance” for galleries that use basements for storage.

While some changes have been dramatic — like relocating entire collections — other shifts have been subtle. “Objects that are more fragile or more difficult to move may be exhibited in January or March, after the hurricane season,” one art insurer, Claire Marmion, told the Observer.

5. FEMA wants some of its money back.

The Federal Emergency Management Agency has handed out $1.4 billion for disaster survivors across five states, but the agency is also asking for its money back. In early September, the Associated Press found that FEMA has asked around 850 households to return a total of $5.8 million in Sandy relief money. About $53 million in payments are now reportedly under review. These cases are not the result of fraudulent activity by people making false claims, but rather the agency’s own mismanagement.