The news from Davos last week — that Al Gore is reviving his Live Earth music festival, and that Pharrell Williams will serve as creative director — should make everyone … happy.

Not just because it will reach millions with a crucial message, but because it comes as a good reminder of Gore’s ongoing, tireless, and creative work, in what must be the most successful second act of any political life in U.S. history. Though insular Americans tend not to know it, he’s a global rock star, the political equivalent of one of those slightly older but very much beloved musicians. (The Paul McCartney of climate change?) I heard him speak one evening in September to an international crowd gathered by the U.N. in New York, and he brought people to their feet again and again.

And what was interesting was how. Instead of just dutifully repeating the old hits, his message on warming has changed. It’s now defiant and optimistic: The old energy system is doomed, as he wrote in Rolling Stone last summer. The falling cost of solar panels will ultimately sabotage fossil fuels. “The forward journey for human civilization will be difficult and dangerous, but it is now clear that we will ultimately prevail.”

This message is poison to the Exxons of the world; it’s a clever undercutting of their argument that burning ever more coal and gas and oil is inevitable, that the world has no choice. It’s a message delivered at the highest levels (Gore is always there in places like Davos where the 1% have to listen) and at the broadest: Live Earth, set for June 18, will be more about harmony than dissonance, but it will reach wide swaths of the planet, reinforcing the message that change is coming and that it’s cool.

The one potential downside to this message is that it might also undercut the efforts of those of us in — to stretch a metaphor — the various garage bands out there fighting the fossil fuel industry more directly. The larger public might start to think that standing up to power isn’t necessary because power is going to do the right thing by itself. But it’s precisely here — in lending his credibility to the rest of us — that Gore has been so powerfully helpful, and often in unacknowledged ways.

I remember, for instance, in the fall of 2008, when 350.org was as fledgling as an organization could be. The world was meeting in Poznan, Poland, for its annual effort to do nothing about climate change, and Gore was, patiently, once again giving the keynote address to the assembled delegates, trying to exhort them to do more. We’d asked him if he would embrace the new 350 ppm carbon dioxide target outlined by Jim Hansen, but we didn’t dare hope he really would: The last thing the hapless negotiators wanted was a harder target. But toward the end of his speech, Gore said: “Even a goal of 450 parts per million, which seems so difficult today, is inadequate. We need to toughen that goal to 350 parts per million.”

All the young people in the room erupted in cheers that stopped the talk for a minute or more. I pounded May Boeve, now executive director of 350.org, so hard on the back that she may still have a bruise. He had said, in effect, listen to the outsiders; go beyond the process.

And not for the last time. I remember the first week of the sit-ins against the Keystone pipeline in August of 2011. Now they seem like the curtain-raiser on what’s become the enviro fight of a generation, but at the time it was almost impossible to get anyone to pay attention, despite the largest civil disobedience action about anything in many years. Official Washington knew the pipeline was a done deal, and that no motley collection of Native Americans, ranchers, scientists, and climate activists was going to derail it. But then Gore wrote a short note on his blog. In its entirety:

The leaders of the top environmental groups in the country, the Republican Governor of Nebraska, and millions of people around the country — including hundreds of people who have bravely participated in civil disobedience at the White House — all agree on one thing: President Obama should block a planned pipeline from the tar sands of Alberta to the Gulf of Mexico.

The tar sands are the dirtiest source of liquid fuel on the planet. This pipeline would be an enormous mistake.  The answer to our climate, energy and economic challenges does not lie in burning more dirty fossil fuels — instead, we must continue to press for much more rapid development of renewable energy and energy-efficient technologies and cuts in the pollution that causes global warming.

Short, but it spoke volumes. Here was the man who should actually have been in the White House, backing protesters who were pressing the president from the party where he’d spent his life. He didn’t need to do it — it would have been easy to excuse himself on the grounds that he needed to keep communication lines open with the White House, or some such — but do it he did, and it helped grant credibility to the fight. 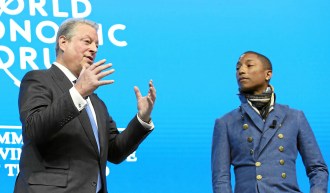 These examples could be multiplied all day. For someone who did his service to humanity with An Inconvenient Truth, clearly the most important moment of the effort to address global warming, Gore has proven remarkably willing to go on fighting, and at every level. I know where I’ll be on June 18: tuned in to Live Earth. Pharrell said it well: “Happiness is the truth.”

Bill McKibben is the founder of 350.org and the Schumann Distinguished Scholar at Middlebury College. In 2014 he was given the Right Livelihood Award, sometimes called the “alternative Nobel,” in the Swedish Parliament. He is also a member of Grist’s board of directors.

What’s the safest way to take my baby on the bus?