B.C. put a price on carbon. What happened next will surprise you 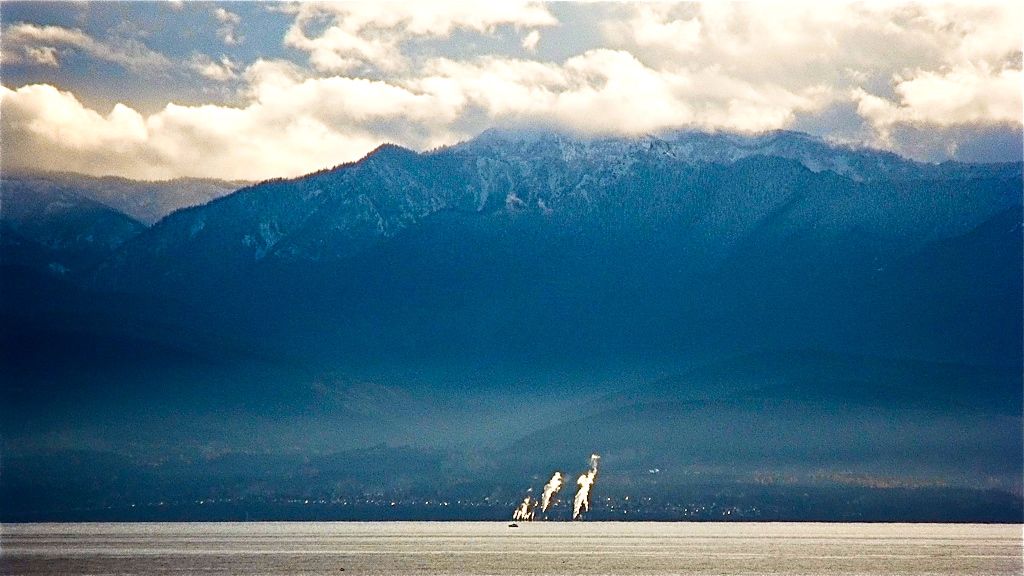 B.C. put a price on carbon. What happened next will surprise you

When I pull up to the pumps in my small hometown on the coast of British Columbia, Canada, I pay more for a tank of gas than in California, my new home. Why? Because regardless of where gas prices hover at the moment, the B.C. government tops off every gallon with a 25-cent tax.

Complaining about gas prices is almost as ubiquitous as small talk about the weather, so it seems counterintuitive for politicians to hike costs up even further. Yet somehow the province’s Liberal party managed not only to do just that, but also to win an election centered on the issue in 2009. They did it by designing the tax in a way that benefits the province’s robust middle class.

The B.C. carbon tax is built on a simple tenet of human behavior: When the price of something goes up, people will consume less of it. It actually applies to not just gasoline, but to all sources of atmospheric carbon, including natural gas and propane, and is based on how much carbon they emit. For example, since natural gas burns cleaner than gasoline, it is taxed at a lower rate. This ensures emissions are priced in proportion to their impact on the climate.

As a result, British Columbia’s per capita greenhouse gas emissions are now nearly 20 percent below the rest of Canada’s. This put the province “within spitting distance” of its goal to reduce emissions 6 percent below 2007 levels by 2012 a year ahead of schedule, says Mary Polak, B.C.’s minister of the environment.

Sustainable Prosperity, a research and policy institute that measured the tax’s impacts, reported that the policy reduced fuel consumption seven times more than if the price of gas had naturally increased by the same amount due to market fluctuations. The tax drove consumption down not just by pushing gas prices up, but also by raising awareness about why we need to reduce reliance on fossil fuels.

All that happened in the span of just five years. The carbon tax’s environmental accomplishments are certainly noteworthy, but many people are even more excited about how the economy has responded. While the levy is the highest of its kind in the world, the regional economy has still continued to grow on pace with, and in the last couple of years slightly faster than, the rest of the country. Researchers from Sustainable Prosperity caution that saying the tariff has led the economy to grow would be pure speculation. But just showing that a carbon tax doesn’t flat-line the economy is remarkable, considering that for years, vested interests have been claiming such a measure would cause economic collapse.

The fee was implemented gradually to give people a chance to adapt to the increased cost of fuel. Between 2008 and 2012, the price climbed from $9 to $27 per ton of carbon emitted, the amount that would be released by burning seven tanks of gas. (All dollar amounts have been converted to American figures.) This gave individuals and businesses a chance to switch to greener alternatives before the highest fees kicked in.

Climate scientists and economists have been saying for years that the environmental costs of carbon are much higher than what we traditionally pay. But figuring out the true cost of carbon pollution to society is hard to do. For example, climate change will cause storms to become more frequent and intense, but exactly when and where they will hit can’t be predicted precisely, which means neither can the price tag that accompanies them. The United States government estimates the cost is somewhere between $12 and $116 per ton. Even this estimate is likely conservative, given climate disruption is proving to be more severe than previously anticipated.

Environmental benefits aren’t the only reasons why 64 percent of British Columbians support the levy, though. It’s because we benefit in a tangible and ongoing way from it. The revenues collected don’t get funneled into a government slush fund. Instead, the tax is “revenue neutral,” meaning that the money collected goes right back to the taxpayers in the form of lowered income taxes or checks.

How much you get depends on your income. If you earn less than $29,300 annually, and wouldn’t benefit from a tax credit, you get a check four times a year. As a grad student and someone who falls into the low-income bracket, I look forward to the checks I receive, these days totaling $105 a year. (This number increased incrementally as the fee went up.) Rural and northern residents, who inevitably endure harsher winters, travel longer distances, and face greater obstacles to reducing their dependence on fossil fuels than their urban counterparts, receive an additional sum.

People in the next two tax brackets, earning up to $111,300 a year, receive a rebate on their income taxes. As a result, middle class families, which make up about 60 percent of the population, enjoy the lowest income taxes in the country. The highest income earners, however, don’t get a tax break. And because the tax is applied at the source when a fossil fuel is purchased, similar to a sales tax, it makes getting out of paying difficult.

Herein lies the cornerstone of broad support for the initiative: Whether you care about taking action on climate change or not, chances are good that you benefit from the tax, either in the form of regular checks or via the lowest income taxes in the country. The fact that the tax structure promotes equity is an added bonus.

And if you’re careful about how much fuel you burn, you could even get more back than you paid in the first place. I’m sure that’s true for me because I walk or cycle when possible and don’t own a car. Others who reduce their emissions, by grouping trips, carpooling, or switching to a more efficient vehicle, stand to benefit similarly. In this way, the tax rewards green behavior.

My father, a small business owner on Vancouver Island, can’t avoid driving because he needs to travel to the properties that he appraises for work. But his priorities have shifted. “The carbon tax makes up a significant enough percent of the increasing price of fuel that it has definitely tipped the scale on how much I drive,” he says.

So when he had to replace his truck last year, he bought a more fuel-efficient model, and he bundles his errands, rather than taking a separate trip for each. “It also changes the way that I drive,” he says. “Now I’m more conscious about accelerating more slowly and driving at slower speeds because it burns less gas.”

Even the Chamber of Commerce, which represents small and medium-sized business, endorses the policy. Jon Garson, the chamber’s vice president of policy, explains that although there were some initial qualms, chamber members largely understand that the future costs of climate change are going to outweigh the costs of taking action now. As business executives, they also favored an economics-driven solution.

“The most efficient way to address greenhouse gases is to do what any economist will tell you,” Garson says: “Put a price on them.”

Lawmakers padded the blow for business by reducing the tax rates they pay as well. Corporate and small business income taxes have each been reduced by a percent and the threshold for higher tax rates has been deferred by $100,000, meaning that businesses pay a lower rate for earnings up to half a million dollars.

Even so, big businesses have been less enthusiastic about the tax, although they supported the concept when it was initially proposed. The Business Council of British Columbia, which represents the 250 largest companies in the province, contends that exports, a driver of the region’s economy, have been harmed.

Denise Dalmer, the council’s director of sustainability and environment, says that the tax has increased the price of products made in British Columbia. When BC producers export locally made goods to places without the tax, the products are relatively more expensive, putting manufacturers at a competitive disadvantage. It’s especially unfair, the business council argues, because British Columbia is a relatively small emitter compared to the rest of North America.

One particularly carbon-intensive industry that claims it has suffered as a result of the tax is cement manufacturing. When there are manufacturers just south of the border in Washington who make the same product but sell it at a cheaper price, there is an obvious discrepancy. The obvious answer? Create a better product — and that’s what B.C. has done: The two largest cement makers in the province have generated a new product that boasts a 10 percent smaller greenhouse gas footprint than conventional cement. In addition to a new selling point, these lowered emissions mean a smaller tax on the product as well.

Concerns about regional competitiveness may soon be put to rest if a recent agreement between several West Coast states is ratified. Last October, Washington and Oregon signed the Pacific Coast Action Plan on Climate and Energy, pledging to join California and British Columbia by putting a price on carbon.

California already has a cap-and-trade scheme in place, which limits the amount of emissions from the state’s largest polluters and distributes tradable permits. Big polluters can lower their emissions or buy credits from cleaner companies that don’t need them to meet their reductions requirements.

But a carbon tax has a much lower administrative burden than a cap-and-trade scheme like this. The government does not need to decide the exact level of emissions to allow, track credits and pollutant levels to prevent corruption (which has plagued cap-and-trade in Europe), or enforce the rules when companies exceed their output allowance. The tax also galvanizes broader public involvement in lowering emissions because it impacts everyone.

So while in isolation, big business north of the border might see the carbon tax as only resulting in negligible change, our potential impact as a region is significant. British Columbia has a population of 4 million. If you add the three Pacific Coast states, that number becomes 53 million residents, creating the fifth largest economy in the world. If Washington and Oregon pass a carbon tax, the West Coast could soon be the world’s first coordinated carbon pricing zone. And Washington is already making strides in that direction, as the state’s governor signed an executive order in April to accelerate the development of clean energy and to cut carbon pollution in the state.

Such a show of international cooperation could be as important as the greenhouse gas reductions that result: When international climate change negotiations have failed to produce a global deal and when the European Union recently announced that it will back away from its emissions reductions targets, the Pacific Coast Action Plan on Climate and Energy has the potential to be a rare beacon of hope on bilateral climate action.

The leadership of one Canadian province, and now western American states, is sending the message that if national governments won’t commit to building a sustainable future, smaller governments will take matters into their own hands. It will require action by more than one region in North America to slow climate change, but the closer we get to paying for the true cost of carbon and debunking the myth that doing so harms our economies, the faster other places are likely to follow suit.

Whether we do it for the planet or the economy, the sooner the better.