Hacking the climate: The search for solutions to the world's greatest challenge 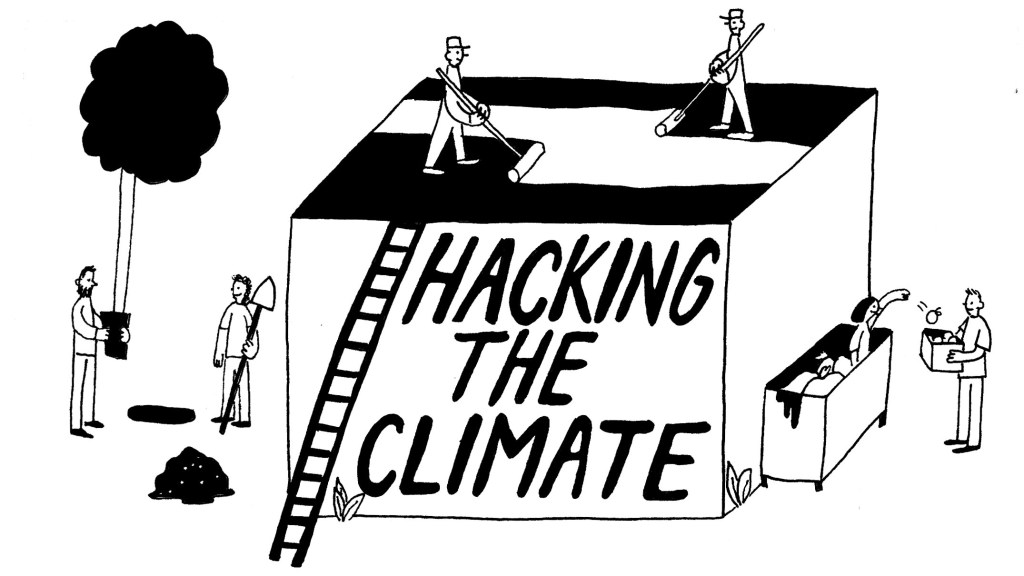 Hacking the climate: The search for solutions to the world’s greatest challenge

In recent years, weather patterns around the world have grown fiercer than ever. Blizzards paralyze daily life across large areas of the nation, while intense heat waves and enduring droughts cripple food production in the West. Huge storms threaten to sweep away coastal communities. These, and other symptoms of climate disruption, have led to growing recognition that something must be done.

Yet few know what to do about climate change. Even some who do know don’t act for fear of the consequences of weaning humanity off of fossil fuels. Politicians and vested interests have bombarded the public with the myth that slowing or halting climate change will lead to devastating effects on people, jobs, and nation’s economies.

It’s time to bust that myth.

In 2006, I co-taught a graduate-level journalism coursewith writer Sandy Tolan called ‘Early Signs’. The class produced a series of nine stories that reported on how people were experiencing the first signs of impacts of climate change around the world. The series appeared on Salon and aired on NPR’s Living on Earth over nine weeks, and the entire project won a George Polk award in investigative journalism.

Eight years have passed since we produced that series. Today, around the world, governments as well as everyday people are taking steps to reduce greenhouse gas emissions, the primary drivers of climate disruption. They’re finding the results of these actions go far beyond curbing global warming: They are also creating jobs, enhancing water quality, increasing crop yields, reducing waste, and improving health. These are the co-benefits of combatting climate change.

The public needs to know about these co-benefits. And so, with considerable input from journalism faculty at UC Berkeley, I led a follow-up graduate-level course, entitled “Early Solutions: Stories from the frontlines of the battle against climate change,” focused on the co-benefits of taking steps to deal with climate change.

The result is five stories, each exploring the various ways individuals and communities throughout the world are addressing climate change and, in return, enjoying the many co-benefits of their actions. Grist will run one of these stories each day this week. Here is a brief synopsis. We’ll update the links as the stories go up.

1. A Canadian province started taxing carbon, which not only reduced its greenhouse gas emissions but also helped the economy grow. The revenue goes right back to the people through tax breaks, so both consumers and businesses benefit. Now, several U.S. states are considering similar measures.

2. A visionary scientist has showed that if we modify the color of the roofs we live under, we can hugely reduce the need for air conditioning and improve air quality. Now, Los Angeles is mandating brighter rooftops to alter the city’s upward temperature trajectory and remedy its age-old smog problem.

3. A team of ranchers and scientists are proving that something as simple as spreading compost on grasslands can pull carbon out of the air and store it safely in the soil. In addition to the climate benefits, this practice makes pastures more resistant to drought.

4. Urban pioneers are leading the effort to reduce food waste, which many don’t realize is a large contributor to climate change, by recovering unwanted food and redistributing it to those in need. Such food rescue activities feed hungry people and promote healthy nutrition, all while reconnecting city dwellers with their community.

5. A rural community in Colombia has entered into an international agreement that pays them to protect their native forest for the carbon in the trees. The added income from this project allows them to improve their livelihoods, while also preserving their unique natural habitat and water resources.

The scope and scale of these stories range from the local to the international, but all five describe human accomplishment that could be achieved anywhere. In contrast to those who predict doom and gloom if we reduce our dependence on fossil fuels, the individuals in these narratives do not forecast the future … they are shaping it.