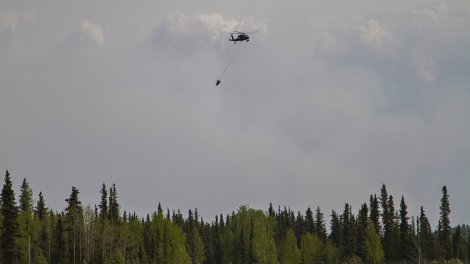 Over the weekend, a megafire blossomed along the southern coast of Alaska, spreading smoke as far as Fairbanks, more than 500 miles north. For Alaskans, it could be a sign of what’s to come.

The fire now covers 284 square miles, making it one of the largest ever recorded in the Kenai Peninsula, according to Pete Buist of the Alaska Interagency Coordination Center. “A fire this large stands out,” said Buist, who’s logged 47 years fighting fires in Alaska.

This particular fire has grown so large as a result of “years of spruce bark beetle infestation,” he told me. The bugs have killed and weakened countless trees in this area, creating more kindling. That’s forced fire command agencies to take a step back and essentially let the fire burn, for safety reasons: “You can’t put people into an area where a bunch of trees have died and fallen.”

The U.S. Forest Service predicts that “the greatest risk to spruce forests over the next 30 years will be in Alaska,” as spruce beetles expand their attack on trees. Beetle habitat is expanding thanks to warmer temperatures and drought-weakened trees. Alaska is warming at twice the national rate, thanks to climate change.

This fire has been driven by a combination of “horrendous” winds, warm temperatures, and a winter almost devoid of snow in the southern part of the state. As of May 1, snowpack in the Kenai Peninsula, where the fire is burning, was about 25 percent of normal. This winter, the persistent warmth and lack of snow led to a rough Iditarod and the third-warmest start to the year on record statewide.

The fire, now bigger than Manhattan and the city of Chicago combined, is clearly visible from space:

The huge fire made for some ominous views from the ground:

Over the weekend, smokejumper airplanes and hundreds of ground-based firefighters battled the blaze, which was still only 30 percent contained as of Tuesday afternoon. The good news is that weather conditions have improved, and light rain helped limit the fire’s growth, enabling an evacuation order to be canceled. A Red Flag Warning for abnormally hot and dry weather conditions is still in effect through Tuesday evening for parts of interior Alaska, including Denali National Park, where additional fires are possible.

Wildfires burn an average of a million acres a year in Alaska, though that number is growing. According to a pre-season outlook by the Bureau of Land Management (PDF), this year’s fire season is expected to be above normal, continuing the trend of active fire seasons in recent years. The past decade (1.8 million acres per year from 2004-2013) has seen an increase in the total area burned by large fires, about double the long-term average (900,000 acres per year between 1950-2012).