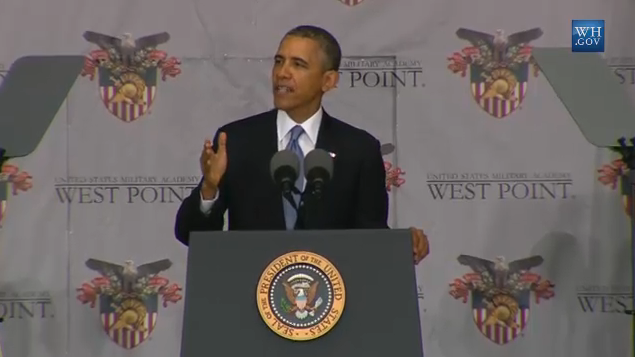 On Wednesday, on a cloudy spring morning, the president laid out the “Obama doctrine” for foreign policy during a graduation address at West Point. The highly anticipated speech came just a day after Obama announced plans for drawing down U.S. troops in Afghanistan. In response to conservative complaints that he lacks a coherent policy vision, Obama did his classic triangulation shtick of laying out the dichotomy he transcends: interventionists on one hand think we should police the world, while “self-described realists” say we should avoid entanglements. Both are kind of right but kind of wrong, while Obama has found the position that is in between and above them both.

The speech was filled with details on the national security threats that emanate from terrorism and instability in the Middle East. But there were only a few sentences on climate change, the menace that threatens to destroy the world’s great cities, uproot millions, and turn crop fields to dust. Secretary of State John Kerry recently said climate change is as much of a threat as terrorism or weapons of mass destruction, but Obama made no such comparison. Rather, he said, “for the foreseeable future, the most direct threat to America at home and abroad remains terrorism.”

When Obama did mention climate change, more than two-thirds of the way into his speech, he presented it as the paradigmatic issue that requires multilateral action and U.S. leadership:

That spirit of cooperation needs to energize the global effort to combat climate change — a creeping national security crisis that will help shape your time in uniform, as we are called on to respond to refugee flows and natural disasters and conflicts over water and food, which is why next year I intend to make sure America is out front in putting together a global framework to preserve our planet.

You see, American influence is always stronger when we lead by example. We can’t exempt ourselves from the rules that apply to everybody else. We can’t call on others to make commitments to combat climate change if a whole lot of our political leaders deny that it’s taking place.

Obama is right to note — as the Department of Defense itself has reported — that climate change effects, such as extreme heat, water and food scarcity, and competition for changing sea lanes, will increase the number of armed conflicts. Some would say they already have done so in the Middle East, where drought and famine have exacerbated the tensions leading to civil war in Syria.

And Obama is right to place climate change in the larger context of multilateralism, in implied contrast to his predecessor’s jingoism. Climate hawks will be heartened by his pledge to lead at the U.N. climate treaty talks in Paris next year. Obama’s problem, of course, is not just getting an agreement, but getting the Senate to ratify it. When, as Obama implied, the entire Republican Party refuses to accept the scientific consensus on global warming, the U.S. is paralyzed. And when the world’s largest economy is paralyzed, so is the world.

Obama should have expanded on his discussion of climate change, an issue with more similarities to nuclear armament than just the threat of annihilation. Both cannot be addressed unilaterally. As with nuclear disarmament, climate mitigation requires agreements that include every nation contributing to the problem. If just a few countries defect, enjoying the fruits of others’ efforts without making their own, the whole system can collapse. So, as with nuclear arms control, limiting greenhouse gases requires the leadership of the most powerful nation. Like it or not, that’s us. We can argue about whether every civil war in the Middle East or Africa threatens our homeland and requires our involvement, but the threat to our security from climate change is undeniable.

That’s why we at Grist refer to ourselves as “climate hawks” — because to fight climate change is to fight a threat to our homeland, and the politicians who hide from it are as pusillanimous as the right-wing isolationists who wouldn’t have fought World War II. Obama needs to raise the national security stakes of climate change, and call out the cowards for what they are.