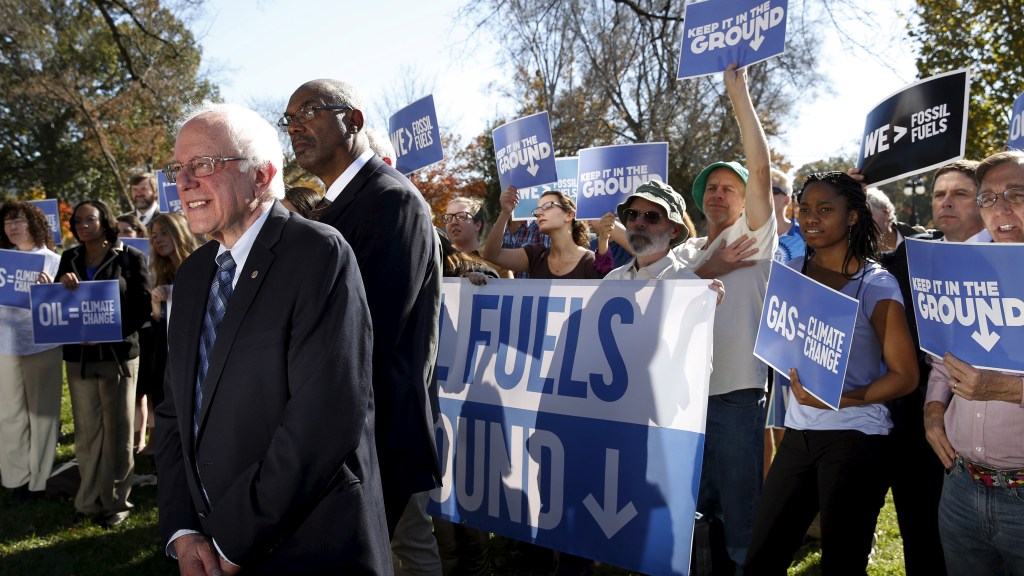 Bernie Sanders announced on Wednesday afternoon his support for a new climate bill that would ban all new fossil fuel development on U.S. federal lands and terminate current leases that aren’t producing. The bill, called the “Keep It In The Ground Act,” would also ban offshore drilling for oil and gas in the Arctic and the Atlantic and would stop new leases for offshore drilling in the Pacific and the Gulf of Mexico.

“I believe all of us have a moral responsibility,” Sanders told the rally at the Capitol in Washington, D.C., which also featured Bill McKibben, the founder of environmental advocacy group 350.org. “That’s just the simple truth.”

If the U.S. doesn’t act more aggressively to limit carbon emissions from burning fossil fuels, Sanders said, “the planet that we’re going to be leaving for our kids is something we should be ashamed of.”

The Vermont senator joined Oregon Sen. Jeff Merkley (D) to make the announcement. According to a brief press release issued by Merkley’s office, the legislation is designed to keep “over 90 percent of the potential carbon emissions from oil, gas, and coal on our federal lands and federal waters underground forever.”

Sanders also took the opportunity to attack Republican rivals who resist embracing action on climate change, pointing out that they don’t deny the science that smoking causes cancer. “But somehow — somehow! — when it comes to climate change there are massive attacks on scientists who tell us the truth about climate change.”

“Worry less about your campaign contributions, worry more about your children and grandchildren,” Sanders told his Republicans colleagues. “The debate is over.”

Sanders’s announcement could open up a difference with his rival in the Democratic primary, Hillary Clinton, who has also made climate change central to her run for the White House. Climate Desk has reached out to Clinton’s campaign for reaction. The campaign has not yet responded.