California’s landmark climate policy program — AB32, passed in 2006 and defended from ballot attack in 2010 — includes, among other measures, a statewide cap-and-trade system. The carbon market established by AB32 is now up and running.

Unfortunately, some recent changes to the rules threaten to neuter that market, rendering its carbon reductions illusory, at least for several years.

No, this doesn’t mean cap-and-trade is inherently flawed. It doesn’t mean California won’t still be reducing emissions in the meantime, via AB32’s other policies. It doesn’t mean the market is beyond repair (regulators could still take steps to fix it). But it is, nonetheless, a Bad Thing. When it comes to climate policy, the eyes of the world are on California. They need to get it right.

Let’s investigate, shall we?

One concern that faces all carbon markets is “leakage,” whereby emissions are reduced within a carbon market merely by being pushed outside it.

The kind of leakage most people are familiar with has to do with displaced industrial activity. Say State X implements a carbon market. In response, a company with a factory in State X closes it and reopens it in State Y. Now State X has reduced its carbon emissions, but total carbon emissions haven’t fallen at all — they just migrated. That doesn’t do anybody any good.

California’s critics are always warning that AB32 will cause industrial leakage, but it hasn’t really happened, and isn’t likely to. (A subject for another post.)

There is, however, another kind of leakage that’s less widely understood. It’s a bit wonky but, in the case of California’s fledgling carbon market, a very big deal. It’s called “resource shuffling.” Allow me to blogsplain.

California is part of the western electricity grid, which spans over the entire Western U.S., from the Pacific Ocean to the Rocky Mountains. The state imports somewhere between a quarter and a third of its electricity from other states on that grid.

On a physical level, it doesn’t really make sense to talk about electricity “imports” vs. “exports” within a common grid. All power generators feed their electrons into the grid, where they are shared equally by all consumers across the grid. There’s no difference between clean and dirty electrons, no way to tag them or trace their source.

But on a financial level, electrons can be traced, through power contracts. If a California utility buys an ownership stake in (or contracts with) a coal plant in Arizona, its portion of that coal plant’s power is treated as imported and those emissions are credited to California.

Now, say a utility in a carbon market wants to reduce its carbon emissions. It could build renewable energy generation, or launch efficiency or demand-response programs, but gosh, that stuff is expensive and difficult. Isn’t there something easier and cheaper? Why yes! Here’s two other things it could do.

One, it could sell its ownership stake in a coal plant and buy a stake in a natural gas plant. Voilà! The net emissions of its power portfolio has declined.

Or two, it could shuffle power contracts away from coal plants to unspecified sources, which are treated as natural gas. (More sinister yet, it could help a coal plant obscure the source of its power, rendering it unspecified.) Again: voilà! For bookkeeping purposes, its emissions have fallen.

See what’s wrong here? In both cases, the utility reduced the emissions for which it is responsible, but real-world emissions did not decline at all. The same amount of dirty energy is still feeding into the western grid. The emissions just got “shuffled” off the California utility’s books.

For obvious reasons, resource shuffling is bad news for carbon markets. It makes carbon emissions into a meaningless shell game, exactly the sort of shenanigans cap-and-trade critics are always warning about.

As it happens, California regulators are (or were) well aware of this danger. AB32 contains strong language on leakage, saying that regulations must “minimize leakage” and that emission reductions achieved under the program must be “real, permanent, quantifiable, verifiable, and enforceable by the state board.”

And the initial guidance document written by regulators (which details the mechanics of how AB32 is to be implemented) stated clearly that “resource shuffling is prohibited and is a violation of this article.” In fact, the initial guidance contained a provision that would have forced utility executives to testify under oath that their emission reductions were real and not merely shuffled. Powerful and unambiguous stuff!

UC Berkeley research fellow Danny Cullenward tells the story of what happened next:

So the new AB32 regulations now say that resource shuffling is prohibited … except “when the substitution occurs pursuant to the conditions listed in section 95852(b)(2)(A).” Just a little tweak, right? Except 95852(b)(2)(A) contains loopholes wide enough to sneak a coal plant through. (To see for yourself, check out the current regulations, pp. 106-108.)

In other words: California regulators caved. A blanket prohibition on resource shuffling became — behind closed doors, absent public discussion, and without a peep of protest from NGOs or state lawmakers — carte blanche for utilities to shuffle at will.

The amount of potential leakage involved is not trivial. Cullenward and a colleague calculated that “if California utilities relied on the safe harbors to divest from just six coal power plants, they could cause between 108 and 187 million tons of carbon dioxide to leak out of California’s market — a quantity that is roughly equivalent to the expected size of the market” [my emphasis]. That’s right: If utilities take advantage of all the loopholes regulators have helpfully provided, up to 100 percent of the carbon reductions in the early years of California’s carbon market could be illusory.

And the shuffling is already underway. In the early months of the market, three of those six coal plants got shuffled away, leaking between 30 and 60 million tons of carbon dioxide out of the market. In a regulatory filing, one utility made its motivation very clear: one benefit of divesting from the coal plant, it said, is “relieving [the Los Angeles utility] from having to purchase emission credits.”

The effect has been predictable. When carbon credits are cheap and easy to get, there will be an oversupply and prices will fall. Sure enough, when the draft regulatory amendments were released in July 2013, the price for a ton of carbon on California’s market began declining. Before it had been bouncing around between $12 and $20, but ever since it has been stuck at $12, just above the price floor (which is $11.34/ton as of July 2014).

As long as resource shuffling goes on, California’s carbon market will be dysfunctional and the price will sit on the floor — acting, Cullenward notes, basically as a small carbon tax. But that tax will be much smaller than the implicit carbon price in AB32’s complementary policies, so the market itself, the trading, will produce virtually no real carbon reductions.

That is a shame. A damn shame, even. But there are two pieces of good news.

First, despite the carbon market being the headline feature of AB32, it’s actually responsible for a pretty small chunk of the bill’s overall carbon reductions. (More on that here.) Specifically, so-called “complementary” policies are doing 80 percent of the work. This chart shows where AB32’s reductions come from (“additional market reductions” is the carbon market): 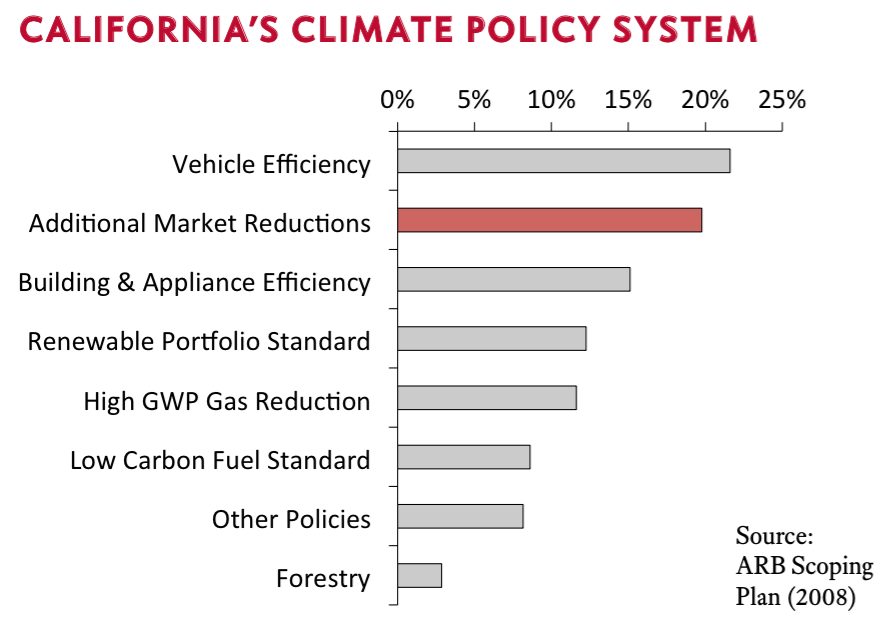 The robust suite of complementary policies in AB32 means that substantial carbon reductions will go forward in California regardless of whether the carbon market remains dysfunctional for a few more years.

Second, resource shuffling is a one-time thing. Once utilities are divested from all their dirty sources, those sources are gone for good; after that, the absolute reductions will start kicking in. If California just sticks with it, eventually the market will right itself.

This isn’t a fatal flaw in California’s climate efforts and it doesn’t reveal the inherent perfidy of carbon markets. It is, however, a huge wasted opportunity and a completely avoidable mess. Utilities did have some justifiable complaints about the rigidity of the resource shuffling provisions, but there are ways regulators could have been more flexible or imaginative without giving away the whole game and making a mockery of statutory intent.

But the cat is more or less out of the bag at this point. The smart solution going forward would be for California regulators to crank down the carbon cap, an amount equivalent to all the leaked carbon. That would, in a somewhat perverse way, punish utilities that didn’t engage in shuffling. But it would restore integrity to the market and bring the carbon price back up to a meaningful level.

In the absence of that reform, market participants will (rightly) suspect that carbon prices in California are more a function of regulatory whim than market forces. And so they will not behave like market participants, but like predators, hungry to capture regulators.

Cullenward wonders what this says about California regulators, and he’s right to. He also wonders what it says about cap-and-trade systems. As a longtime C&T apologist, I don’t think it says much, at least not much specific to that policy. It just shows, yet again, the pervasive power of money and influence in politics, which will have corrosive effects on any climate policy.

It is not enough to pass legislation or propose new regulations. Indeed, that is only the beginning.

Yes. The most fateful time in a law’s life is not the fight to get it passed but the implementation afterward. I think activists and advocates sometimes forget this and tune out after the victory party. But this episode shows that pressure on regulators must be maintained long after a bill is signed.

I once read a fascinating book by Eric Patashnik called Reforms at Risk: What Happens After Major Policy Changes Are Enacted. It’s about what kind of programs prove durable after they have passed into law. One of Patashnik’s markers of durable policy is that it changes structural conditions — institutions and markets — in ways that are difficult to unwind.

I think AB32 will easily clear that threshold and that the carbon market it establishes will prove resilient and eventually course correct. But as California moves on to planning the future of its climate programs, out to 2030 and beyond, it will be crucial for regulators to stick to their guns and stay strong in the face of political pressure. That will only happen if citizens hold their feet to the fire.

Millennials, Monsanto wants to be your hipster friend